"As our customers' desire for superb imaging devices to help them create amazing images and video grows, Canon U.S.A. is dedicated to providing digital cameras that have the features and functions to easily capture their most important moments," said Yuichi Ishizuka, president and COO, Canon U.S.A., Inc. "With these five new PowerShot digital cameras, Canon hopes that users will capture and share their favorite moments, without compromising image quality."

The three new PowerShot SX series cameras (the PowerShot SX530 HS, the PowerShot SX710 HS and the PowerShot SX610 HS) feature optical zoom ranges of 50x, 30x and 18x, respectively - making them powerful enough to capture images close-up as well as from a distance. The built-in Wi-Fi and NFC connectivity options in the new PowerShot SX cameras allow users to easily share beautiful images online with family and friends by connecting to a compatible smartphonei, tablet or Wi-Fi enabled computer. Experiencing the power of a printed image is also easy when users connect and print to a Canon wireless PictBridge certified printer, like the Canon PIXMA MG7520. And for even more convenience, the cameras are compatible with the new Canon Connect Station CS100 - a dedicated device for easy and safe image and video viewing, sharing and storage.

The PowerShot SX530 HS
The PowerShot SX530 HS digital camera builds on the features included in the PowerShot SX520 HS digital camera. With a 50x Optical Zoom lens (equivalent to 24-1200mm) and Canon's Optical Image Stabilization, the camera is ideal for those with active lifestyles who want to take high-quality close-up shots of their travel adventures or weekend getaways. And with Wi-Fi and NFC capabilities, users can easily share and print their special images wirelessly. In addition to featuring a powerful optical zoom range and wireless options, the SX530 HS digital camera combines a16 Megapixelii High-Sensitivity CMOS sensor and Canon's DIGIC 4+ Image Processor to create the Canon HS System allowing for excellent low-light performance.

Giving users the ability to capture life in motion, the camera features a dedicated movie button so users can easily record 1080p Full HD video utilizing the camera's full 50x Optical Zoom capability. In addition, Intelligent IS enables the camera to automatically choose the best settings to help optimize image stabilization for virtually shake-free images and video in various shooting conditions. The camera's high-speed AF allows users to autofocus quickly to help capture every shot with ease. The PowerShot SX530 HS digital camera's advanced Zoom Framing Assist feature intelligently controls the lens, making it easy to identify the main subject of the shot, even when the subject is moving.

Zoom Framing Assist helps make it easier to keep distant subjects in the field of view, even if the subject is in motion. The camera also records high-quality 1080p Full HD video at up to 60 frames per second through a dedicated movie button. Hybrid AUTO automatically recognizes the scene and optimizes camera settings to capture the high image quality for still photos while simultaneously creating a great looking highlight reel in 720p HD video.

The PowerShot SX710 HS digital camera also features Creative Shot mode and Short Clip mode for artistic and creative photos and videos. Using Story Highlights mode, the camera creates a highlight reel of selected images using a range of optional special effects such as Fast Motion and Slow Speed, creating a unique imaging experience perfect for sharing with family and friends. The images can be selected automatically based on events, date, Face ID, or the selection can be customized based on photos hand-picked by the user. The result is an exciting highlight reel that can be accompanied by music options provided with the camera, without the use of external editing software.

The PowerShot SX710 HS digital camera is scheduled to be available in February 2015 for an estimated retail price of $349.99.

The PowerShot SX610 HS digital camera is scheduled to be available in February 2015 in red, white or black for an estimated retail price of $249.99.

With Smart AUTO mode, the camera automatically chooses the optimal settings to help ensure the best possible image is taken, and with creative effects like Fisheye, Toy Camera and Monochrome users can take images to a new artistic level. For those who are constantly on the move, the camera is outfitted with ECO mode to help extend battery life allowing more photos to be taken over a longer period of time.

The PowerShot ELPH 170 IS digital camera is scheduled to be available in February for an estimated retail price of $149.99 in a variety of colors - blue, silver and black.

The PowerShot ELPH 160 digital camera is also scheduled to be available in February for an estimated retail price of $119.99 in four colors - black, white, silver and red.

Comments
Posted to: Nikon News   Category: Nikon Professional Services
Post Date: 1/5/2015 8:23:00 AM CT   Posted By: Sean
How Kirk Messed Up My L-Bracket Order (And How They Gained a Customer for Life) 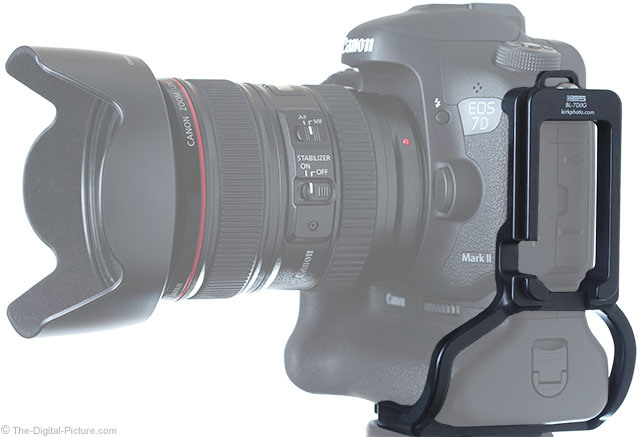 To be perfectly blunt, I'm addicted to L-brackets. Ever since getting one for my EOS 5D Mark III, I've grown to loath shooting without the convenience of a well-made L-bracket. When upgrading cameras, I always budget for the purchase of a battery grip and an L-bracket to go along with it. They are essential accessories to me.

The weeks spent using the 7D II with a standard Arca-Swiss compatible camera plate attached left me wishing the L-bracket would be available sooner rather than later. I had forgotten how much I had grown to rely on the convenience it afforded me. Finally, my long awaited bracket arrived late one Friday afternoon. I eagerly tore open the box, ripped apart the packaging and immediately paired the bracket to my camera. And... 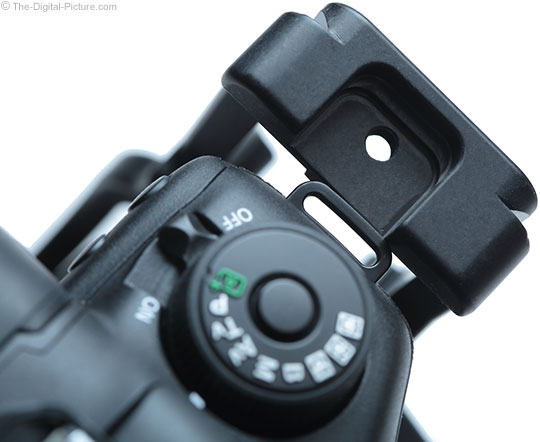 I was crestfallen. No matter what I did, I couldn't get the bracket to fit the way it was supposed to. It had the right model number laser engraved on it, but it simply wasn't right. I took a few images to help illustrate the fitting problem I was experiencing.

The following Monday I called Kirk to let them know there was an issue with the bracket I received. I was happy to find an actual person on the other end of the line after only the first IVR (Interactive Voice Response) option. As I was explaining the issue to the friendly service person on the phone, I emailed them a few images to help them understand how bad the L-bracket fit was. After only a few minutes of cordial back-and-forth, what the lady on the phone said left me astonished...

She told me they would be overnighting me a replacement that included a return shipping label for the incorrectly fitting bracket. She went on to explain that they would be sending me the very L-bracket they had just used to create the official product pictures for their site (which were not live yet) so there would be no doubt that I would receive a correct fitting replacment.

Keep in mind that the person on the other end of the line had no idea that I worked for The-Digital-Picture.com. To her, I was just a random guy who was dissatisfied with his L-bracket. And the speed and efficiency with which she handled my call left me awestruck.

If I hadn't talked to Kirk after that, I would have been amazed at their efficient and satisfactory customer service. Shortly after the call I received a shipping notification email generated from the shipping label that had been created for my replacement. About two hours after that, I received a phone call from Kirk...

Another technician had called me to offer an explanation of what they thought had happened. The following is recounted from the best of my recollection:

"Hi Sean, I think we figured out what happened. The 7D II + battery grip bracket looks almost identical to the bracket for the _______ camera and battery grip. It looks like a small batch of them were laser engraved with 7D II + battery grip model number on them because the operator mistook them for the 7D II brackets, but they weren't. We apologize for the issue, and your replacement is on its way."

Before I began working for The-Digital-Picture.com, I worked for a business that owned several manufacturing firms. As such, I've seen a lot of things that went wrong on a factory floor that led to orders being sent out incorrectly. It shouldn't happen, but it does. So I can understand how two parts that look nearly identical could be mislabeled. But Kirk didn't have an obligation to tell me what went wrong; but they did. And that type of communication, being open and honest about how things might have gone awry, is somewhat rare (but very appreciated). I love the fact that they called me back to explain what they thought happened; it shows a level of caring (about their end customers) that many businesses fail to display.

The next day my replacement L-bracket arrived....and it fit perfectly (it's shown at the top of this post). I sent the incorrect bracket back to them (at no cost) using the shipping label they provided me.

In short, Kirk really impressed me with the way they handled my order. True, the product I received was wrong; it didn't work. However, they did everything they could to resolve the issue, and even went above and beyond by personally calling me back to tell me what led to the problem in the first place.

B&H has the Kirk L-Brackets for the EOS 7D Mark II available with free shipping. 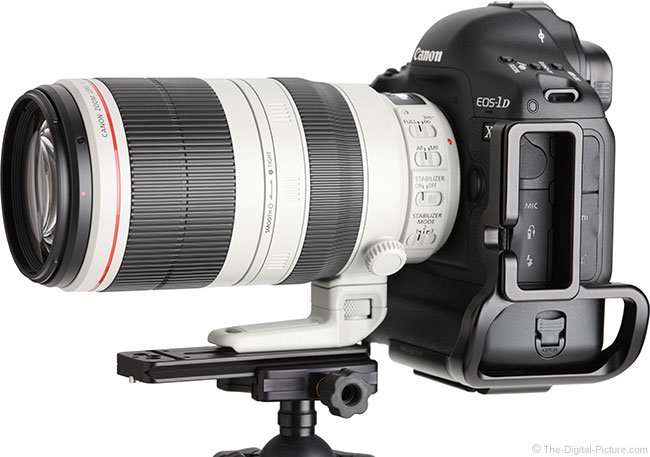 For those of you who were able to completely check out between the Christmas and New Year holidays (we envy you), make sure that you catch the latest review now live on the site, the Canon EF 100-400mm f/4.5-5.6L IS II USM.

Canon may have taken their time in upgrading the venerable 100-400 L, but we think the replacement was worth the wait. Check out the full review to see why.

I've never been a big fan of New Year's resolutions. However, I've always been a fan of setting goals. That may seem a bit ironic and it may just be semantics, but I always felt like an un-met goals was still obtainable – while an unfulfilled resolution felt more like a failure.

Sell off unused gear
I've generally done a good job in investing in the gear that's well suited for my needs. However, there are a few items lying around my house that have become irrelevant due to upgrades or changes in my shooting preferences. By selling off this gear, I can not only free up space in my home, but I can also reallocate those funds to purchase gear I will likely use much more often.

Be diligent about backups
A hard drive failure in 2014 meant that I lost a lot of images that I didn't have backups for. This year, I'm going to be more rigorous about my backup procedures to ensure that when the inevitable happens, it doesn't leave me empty handed.

So what are your photography goals for 2015? Let us know in the comments! 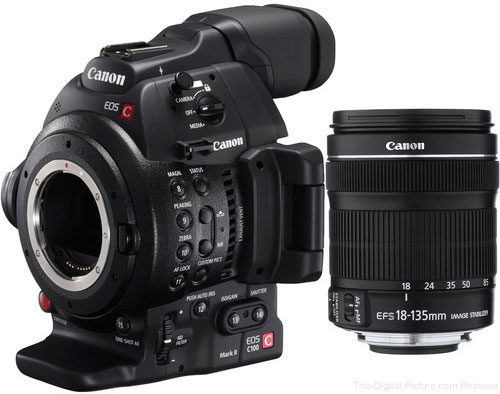 The Canon EOS C100 Mark II Cinema Camera is now available for preorder in several new kits (with expected availability at the end of January). See below for details.