4th Notice on the damage from the flood in Thailand

This is to advise you of the latest situations of Nikon (Thailand) Co., Ltd., a consolidated manufacturing subsidiary of Nikon Corporation in the Rojana Industrial Park in Ayutthaya Province located in Central Thailand, which is suffering damages from the flood.

Water pumping-out by the Rojana Industrial Park authority around Nikon (Thailand) Co., Ltd. has completed on November 26. Following this development, we are putting all our energy into restoring infrastructure and production equipment of the factory aiming for some part of factory operation to resume from January 2012. Alternative and limited production at our partner factories in Thailand has started earlier than expected, and we have started shipment of certain digital SLR cameras and interchangeable lenses since November 30.

2. Estimated impact to our business performance

The impact of the flood to our business performance for the financial period ending March 31, 2012 is estimated, within the scope of our current findings and understanding, to push down net sales by 65 billion yen and operational income by 25 billion yen due to sales opportunity loss. While this estimation remains unchanged from our announcement on November 4, we assure you to immediately advise new findings once it is judged there will be an important change for it. We are continuing our minute investigation on the damage to the buildings and production equipment/tools from the flood.

We have set up support and recovery system under the Emergency Headquarters for Disaster Control headed by the president and continuing our endeavor for recovery and normalization of production as early as possible. Our plan to resume production of digital SLRs and interchangeable lenses to the normal level of volume by the end of March 2012 remains unchanged.

We deeply apologize you for any inconvenience cause by the disaster such as short supply of our products.

Note: Until the proper discounts for version 7 are in place, just order v6 and take the free upgrade option promised by DxO.

Version 6 owners not qualifying for the free upgrade can upgrade to v7 at a discount by logging onto the DxO Labs Store under the "Upgrades" tab. The Standard upgrade is $49 and the Elite is $149. (thanks Steven)

Scuba diver Markus Thompson discovered a Canon EOS 1000D at the bottom of Deep Bay, BC.

The camera, being undersea for a year, was of course a complete loss. The pictures contained on the SD card, however, were not. With the help of the Google+ along with some idetifiable details in the recovered pictures, Marc was able to locate the owner.

See pictures of the camera and read Markus' post here. (thanks Rob)

"This update provides key fixes and improvements in performance, metadata handling, the Adobe Drive Connect UI, and other areas."

I lowered the prices on the remaining used lenses and other gear I am offering for sale in the cUSA.

Canon USA Professional Services (CPS) has a new website. I'm not sure how long this has been up, but ... the new site has a much more "professional" look to it.

Sample pictures have been added to the following reviews:

LightingDiagram.com allows quality lighting diagrams to easily be created and edited. The diagrams can be downloaded free for personal use. Note that Internet Explorer is not supported.

Thanks to its unique expertise in composite materials, Gitzo developed a new High Performance basalt fibre tube. The new tube comes from a radical innovation of the Poltrusion process, the aerospace technology used by Gitzo to manufacture its composite tubes in one single step, starting from the raw fibres.

Fibres are wet in the special resin and then pulled through a high temperature core that generates the tube as we know it. This works perfectly with 6X carbon fibre tubes, while basalt fibres absorb a smaller quantity of resin and this reduces tube density and performance. To overcome this physical limit of basalt fibres, it has been developed a new technology (DRI) to boost a higher quantity of resin into the fibres and increase the tube performance up to 22%, depending on the tube diameter. Besides the High Performance tube, the new Gitzo Basalt Collection offer new sizes and a new look. Basalt tripods are available in Series 1 - 2 and 3 in standard and compact height.

The range also includes a new monopod and a microphone boom, both in a convenient 6 section compact size. The new basalt introduces a new colour scheme: black and flame orange, inspired by the basalt itself, a black rock that comes from the Earth lava core.

The basalt collection is completed by three centre ball heads in the new black and flame orange colour scheme to perfectly match basalt tripods and monopod. Basalt fibre tripods, monopod and boom come with the same features of the top of the range 6X models, such as G-Lock, ALR, Ground Level Set, Power Disk, third ground level leg spread and self locking feet among the others. Basalt tripods come with a smart Gitzo display cleaner and a convenient anti dust bag for storage and packing. 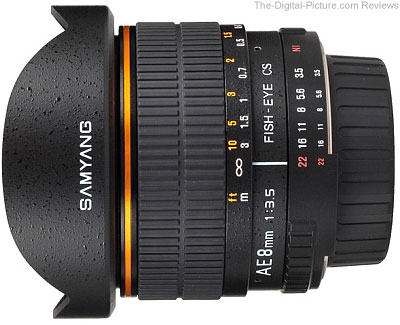 Kraków, November 25th 2011 - Delta Company, the sole distributor of Samyang products for Europe is about to release new lens - Samyang AE 8mm 1:3.5 Aspherical IF MC Fish-eye CS with the Nikon mount. This new, improved version is to replace the previous model without a microprocessor.

Samyang AE 8mm 1:3.5 Aspherical IF MC Fish-eye CS has been fitted with an electronic circuit, and just like other AE models allows for full control of exposure parameters from the camera level, and makes it easy to use i-TTL flash automatics. Owing to the integrated microprocessor, the light measurement system is effective in all photography modes and for all types of Nikon DSLR cameras. AE line additionally records exposure parameters and focus value in the Exif format.

Samyang 8mm 1:3.5 Aspherical IF MC Fish-eye CS is the high-class wide-angle lens designed for DSLR cameras with APS-C/DX sensor. This really is a sophisticated optical construction based on ten lenses arranged in seven groups, including one hybrid-aspherical lens which reduces chromatic aberration level. All lenses are covered with multi-layered, anti-reflexive coating of new generation. Optical parameters are thus of the highest-possible quality.

I've said this before, but I've never meant it more. Today, the USA celebrates the Thanksgiving holiday. While this holiday celebration is typically a time spent with friends and family, it is also a time to reflect on how blessed we are and to express "thanks". And one of my hearty expressions of THANKS goes you. I have greatly enjoyed meeting (virtualy) and getting to know so many of you. And without you, this site would not exist - It's really as simple as that. The site's support comes soley through your purchases made using the links on this site and through your referrals of others to the site who do the same.

As you do your Christmas shopping this year, I would be grateful if you kept this site in mind. Most or all of the retailers below here have a Black Friday/Cyber Monday deal page(s) that will list all of their bargains. Experience no lines, no traffic and no parking hassles.

Again, Thanks! And happy Thanksgiving!

(Using the following links to make your purchase supports this site)

I listed a large quantity of used lenses, filters and other gear for sale in the cUSA.

John Reilly (neuroanatomist) is back with his AF Microadjustment Tips.

I have not had time to review all of the new Lowepro Lens Cases yet, but this Lowepro Lens Case Size Chart (Excel .xls format, provided by Lowepro) should make selecting the right case easier.

Manfrotto has announced a new L-Bracket.

Looks like a very useful product if you are using the Manfrotto quick release system. I'm still hoping they migrate to or add the Arca-Swiss standard.

dc.watch.impress.co.jp has posted an interview with the developers of the Canon EOS-1D X. The article, being in Japanese, is completely illegible to me - but Kaz sent me a summary of what he felt was new information. Here are his notes:

1) The 1D X is the first time they were able to combine the features of the 1D and 1Ds, which they couldn't do before due to technological issues. It was a "finally" kind of feeling after 10 years of development.

2) They knew some people would ask for more MP even when they announced the 1D X, but have their ears open and will keep thinking about what the market needs.

3) They're always considering the possibility of MF, but have no current plans to enter that market.

4) Timing of the 1D X announcement was to quell questions about the 1Ds replacement and to warn pros before the Olympics, and in consideration of Nikon, which they consider to be their biggest competitor when it comes to pros.

5) The earthquake had some effect on the 1D X release date, but it's not that. They actually wanted to release it earlier than March, which they feel is still a bit late for the August Olympics.

6) Although they can't say they'll never use them in the future, they are stopping production of APS-H sensors.

7) The APS-H size was more to allow for high-speed shooting, so they're moving fully to full-frame, to focus more on image quality.

9) ISO 204800 isn't overkill, as some feel, because some photojournalists need that kind of sensitivity.

10) Noise levels of the 1D X should be 2 stops better in all ISOs compared to the 1D IV.

11) The Digic 4 is now used as an image recognition processor, so it should be more than plenty to deal with the mere 100,000 pixels used for the AE sensor.

12) They know some people want the low-pass filter removed. The low-pass filter in the 1D X is fundamentally the same as previous models, and they decided to keep it in because the benefits outweigh the drawbacks for the pro segment that will use the 1D X.

13) Weather sealing is about the same as previous models.

14) HDR and some lens corrections still can't be done in-body due to processing power issues. But they may be added in future models.

15) Lots of consideration was given to the duplication of buttons in the portrait orientation, as well as preventing accidental pushing of some buttons (like the trash button).

16) Quieting the dial and buttons was also considered for video use.

17) Contrast AF speed is the same as in previous models.

18) The jello effect of the rolling shutter is slightly improved.

19) As for mirrorless, they definitely see the utility of a small camera, but have nothing to report at this time.

Think Tank Photo is offering up 11 camera pouches and memory card holders worth almost $300 that you can have added for free to your purchases. Every time you place an order with Think Tank, when you check out you will be asked which one of the items listed below you wish you receive for free. There is no limit on the number of orders you can place. You receive free gear with every order.

To get this “free gear with every order” offer, click on this link:

Many Canon EOS DSLRs and many lens brands and models are represented in this batch. I hope to add many more pictures in the near future.

Be sure to read the tips and other comments below each picture.

An issue that sometimes caused the aperture value recorded in image data to differ from the actual aperture value at which the image was shot has been resolved.

An issue that in some rare cases caused images to be blurred when shot immediately after the camera was shaken or moved quickly has been resolved.