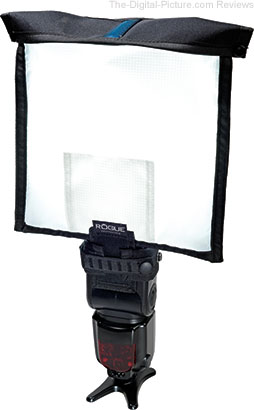 I have not kept my love for soft boxes hidden. The wrap-around light they provide is perfect for many photographic uses including portraits, products, macro and many other needs. When I need the best lighting available, a softbox (or several of them) is my go-to solution.

The problem is that off-camera soft boxes tend to be large, requiring their own stand or holder, and somewhat time consuming to setup. Those issues are not a big deal if you are working in one location (such as a studio), but you might need another set of hands if photographing dynamically such as walking around with a macro lens. And that last-mentioned use is what brought me to the ExpoImaging Rogue FlashBender review.

I get many requests to test direct-speedlite-attached flash lighting modifiers, but I accept very few. After trying many of these products that proved of little value to me (usually because of the too-small forward-facing lighting surface they effectively provided), I remain highly skeptical of the products in this group – regardless of how fancy they look. I had been hearing some good things about the Rogue FlashBender system and after a conversation with Erik Sowder at ExpoImaging, I decided to take a look at this extensive line of flash modification gear. Erik kindly sent me several of the FlashBender kits to put to work.

The timing of the delivery of these kits was ideal. I had some reviews under way (600EX-RT, ST-E3-RT, Sigma 105 OS Macro Lens and Sigma 150 OS Macro Lens) that afforded great opportunity to use the FlashBenders. As I often do, I was able to simultaneously incorporate multiple new products into my evaluation process.

To cut directly to a final verdict, the Rogue XL Pro FlashBender Reflector with a soft box accessory attached is an excellent on-camera-flash light modifier for macro work as exampled in the following image. 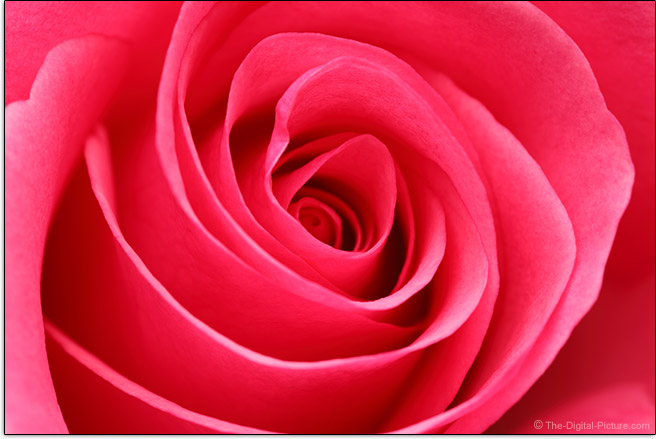 Let's take a closer look at the FlashBender system of products.

The foundation of the FlashBender system is the direct-flash-attached reflector. The reflector uses an elasticized Velcro band for attachment to the flash head. Available in a variety of sizes up to the 13" x 16" XL version, the reflector's white vinyl-like front surface is designed to (surprise) reflect light. The reflective surface is sewn into a durable black nylon backing material with trim sewn onto the edges.

The heart of the innovation of this device lies under the blue nylon strips sewn into the back of the reflector. There are three coiled steel wires that "... can be manipulated into an almost infinite number of positions, and once released they will hold their position." [Erik]

You can bend these reflectors into practically any shape you wish. Some shapes may be less-than-useful for photographic purposes, but the variety of useful light-shaping orientations available is huge. You can determine how much flash gets reflected forward and how much remains to bounce from the ceiling or another object. You can even bend the reflector into a roll to create a snoot to add a spot of light to your scene. 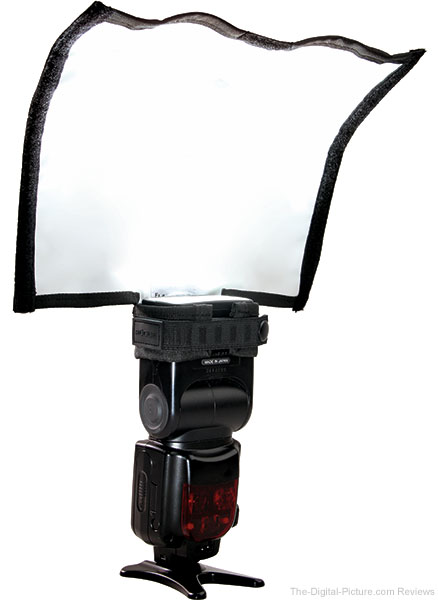 The sides of the front and back of the reflector are lined with Velcro. The Velcro allows the reflector to be locked into the snoot position shown above and it also allows other modifiers to be attached. One attachment is a reversible black/silver reflector. Use the silver side to get a shinier lighting surface. Use the black side to eliminate/flag light from a certain direction (the reflector can be mounted to any side of the flash). 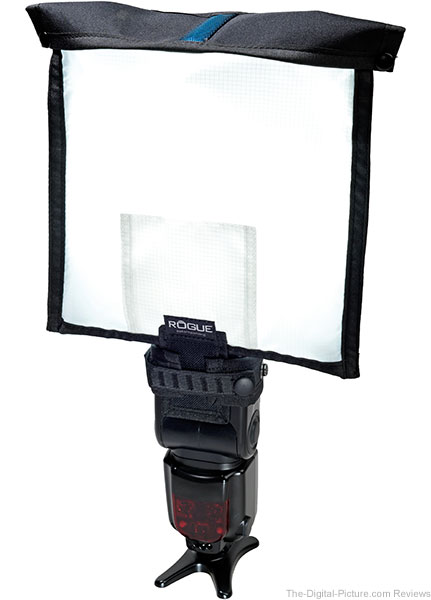 As I was most interested in the soft box capability and because I most-often view larger as better for softbox lighting, I have been primarily using the XL reflector with the soft box diffuser attached and focused my attention primarily on this model for this review.

The overall size of the diffuser does not necessarily matter. Just because the front of the diffuser is large does not mean that the light from the flash will cover that full surface area and only the size and evenness of the light coming from the diffuser matters. One of the first tests I did was to find out just how effectively large this light source was going to be. Here are the results: 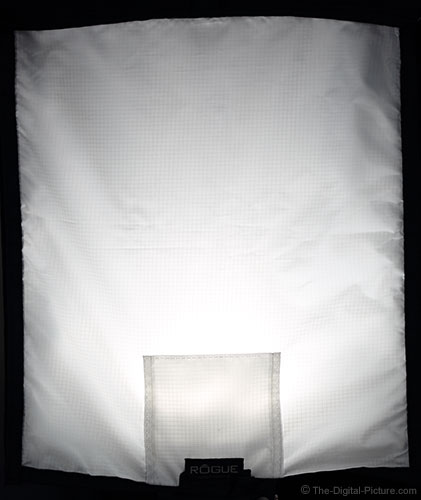 While the entire surface of the diffusion cloth is not evenly lit as would be ideal, these results are excellent for a very shallow direct-flash-attached soft box. While the full corners are not fully bright, I've used much smaller softboxes that delivered on a bright spot in the very center of their front surface. The overall amount of bright surface area on the XL FlashBender is quite large.

Note that the soft box tab (at the bottom of the above images) is pulled very tight to allow the light to reach the full extents of the slightly forward-bent reflector (the reflector is bent slightly forward to progressively reflect light into the diffusion fabric). Preventing the tab from loosening is the biggest issue I encountered with the FlashBenders. If the tab loosens, the diffusion cloth can fold inwards and prevent the light from reaching the full face of the soft box. This was the biggest problem I encountered with the FlashBender system. Keeping the tab tight required some maintenance while actively working with the system. Perhaps a ribbed rubber tab would better stay in place. Gaffer Tape helps.

As you can see in the three zoom examples, changing the flash zoom setting moves the brightest area of light within the soft box. Depending on your subject, you may see this change in your results. For example, used on-camera with a fully-forward tilted flash head and a macro subject, the light can be directed toward the front of the scene or more towards the back as illustrated below. 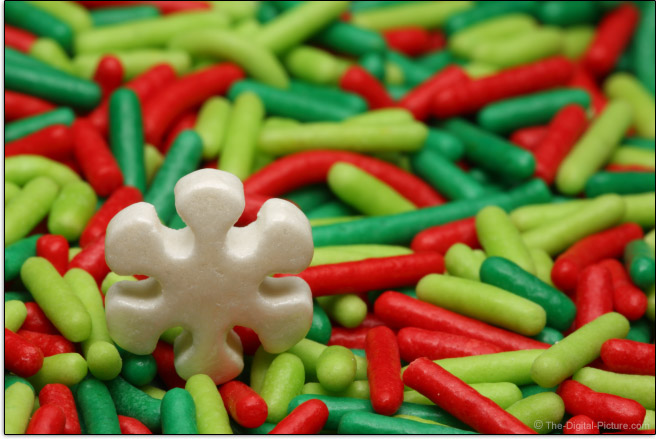 With the Rogue XL Soft Box hanging far over the front of the lens and a close focus distance, I was able to adjust the amount of light on the foreground relative to the background. That this soft box is able to put soft overhead light onto a close subject even when using a long macro lens and hood on it is a very positive feature. ExpoImaging recommends using a 50mm flash head zoom setting, but in some cases such as illustrated above, a setting as wide as 20mm may work better. Note that it is not hard to contact macro subjects with the XL soft box hanging just above the lens.

That the surface area is not completely evenly lit and not stretched completely tight means that you might not want to use this soft box for lighting highly reflective flat surfaces. However, I like the cloudy-sky-like reflection in the off-camera flash sample picture below. 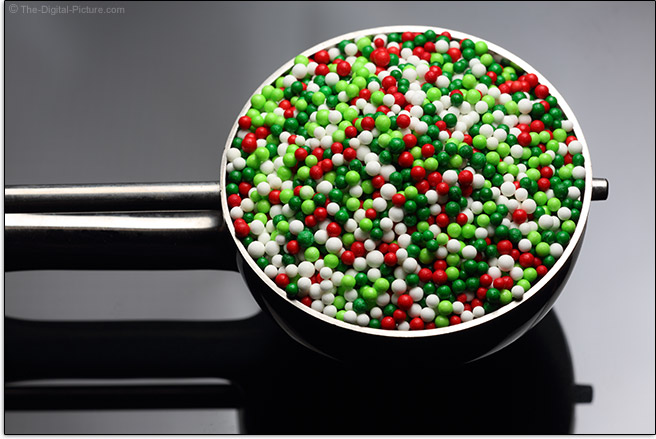 The larger the size of the reflector and the more you attach to the reflector, the larger and heavier the overall setup becomes. While that sounds obvious, my point is in regards to how much you want attached to the flash. Eventually the tail starts wagging the dog. The XL reflector and softbox combination is about the max size and weight I would want hanging onto my flash. It works fine, but you are going to know that the additional 13 oz are attached and when used off camera, the flash will need to be adequately secured to prevent tipping over.

ExpoImaging only shows the FlashBenders being used with a straight-up flash head orientation as they were designed for, but I have been using the full-forward position for macro photography with very good success. Following is a setup for a more-as-designed use of the FlashBenders. 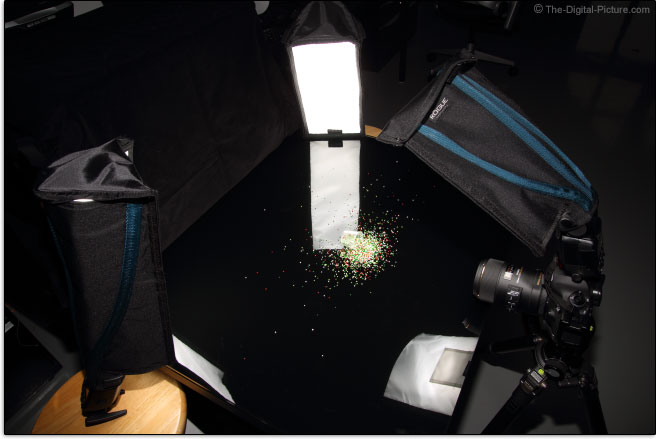 In this setup, I have two remote XL FlashBender strip soft boxes angled in from the back and a large FlashBender soft box on-camera to provide fill light. Here is an image captured using that setup. 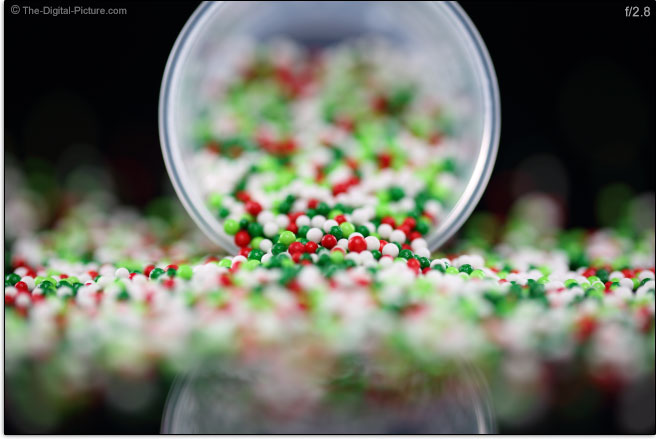 And here is a set of examples from this same shoot with the strip boxes being repositioned and the front fill light being adjusted. 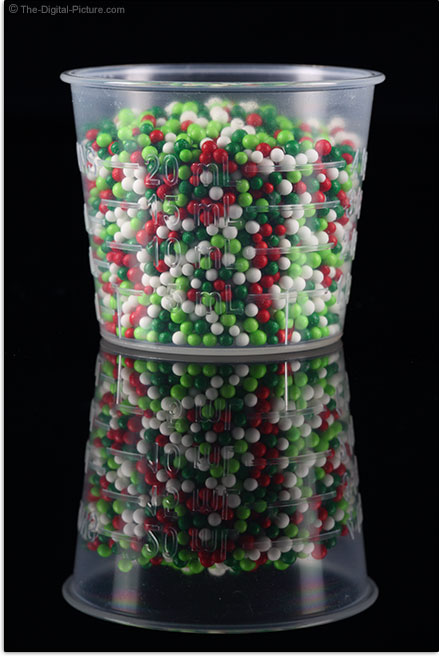 Below is a sample that made use of a pair of off-camera, opposing-oriented, XL FlashBender strip soft boxes for this shot. 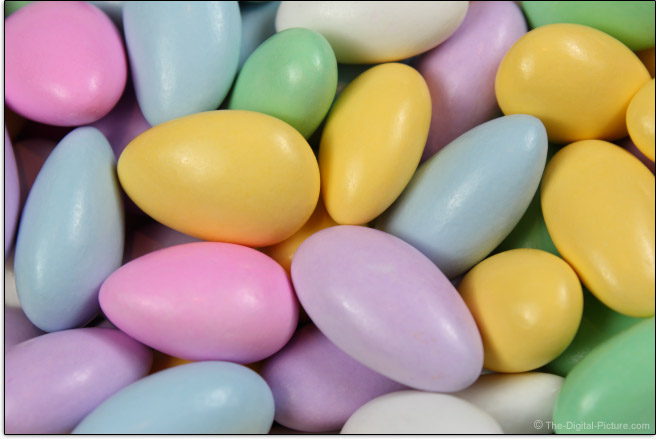 The FlashBenders were on flashes sitting on my studio floor and the candy was in a dish positioned between them. I shot from directly above. The ideal even, soft lighting seemed too easy to create.

Some flowers showing up at the house gave me another opportunity to mount a FlashBender. This time, only a single on-camera flash was used with the XL soft box directed downward. 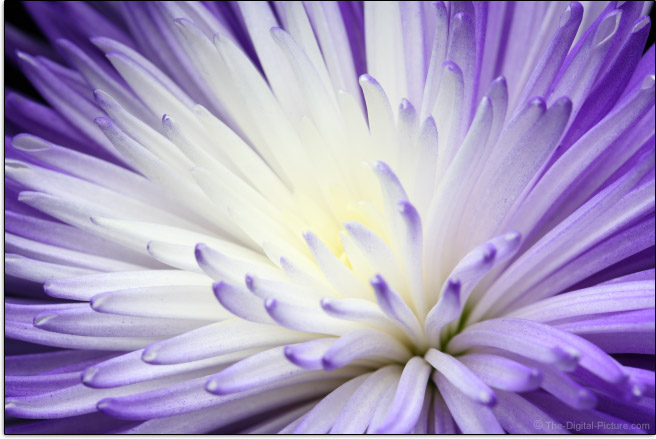 I think the lighting looks great. If you already have a full size flash, the cost of the Rogue accessories needed to create great macro lighting is extremely low compared to a macro flash.

The FlashBender concept works well and the quality of the lighting from this system is excellent. Also very nice is the construction quality of the pieces of this system. The quality of the materials used (and the stitching) appear ready for long term professional use. Velcro/hook-and-loop fasteners have a way of getting snagged on fabric that you prefer not to be pulled apart, but this is no different than with any other product incorporating Velcro. I'm still waiting for the nano-technologists to invent something better, but Velcro is, however, the right fastener for this system.

With the ability to fold in half and very flat, the FlashBender system takes up little room while being stored or transported and weighing less than 1 lb means the weight will also not be a burden.

Rogue FlashBenders and accessories are available individually or in various kits including a Starter Kit, Portrait Kit and Master Kit. 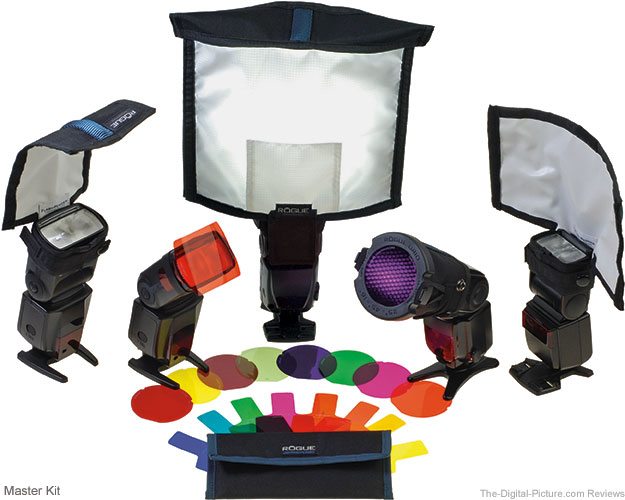 The Rogue XL Pro Lighting Kit is another great option to consider.

As hinted to in the "Portrait Kit", FlashBenders are not just intended to be used for macro work. As large as the XL model is, it is still small relative to the umbrellas and studio soft boxes commonly used for portraiture and relatively small relative to the subject's head. Because even the largest XL soft box model needs to be quite close to the person being photographed to create soft light, you will need to be close to the person if using on-camera flash. Used off camera, the XL soft box can work well from longer distances.

For more general purpose on-camera FlashBender use, including run-and-gun techniques where only on-camera flash can work, use a mix of bounce and reflection. Adjust the reflector to send some light toward the subject (this will also create a catchlight in the subject's eye) and allow some of the light to reflect off of walls, ceilings and other reflective surfaces to provide broad and deep-into-the-scene lighting. Just the higher-on-the-camera light source provided by the FlashBender will provide more-flattering lighting in direct-lighting situations.

The Rogue FlashBenders are moderately-priced – not cheap, but definitely not expensive. The quality of light you can get from them and the fun you can have with them make FlashBenders easily worth their price.

Lighting is one of the most important aspects of an image. The best way to improve the light quality coming from a flash is to enlarge the effective lighting surface the light from the flash is using. This typically involves bounce or diffusion. The ExpoImaging Rogue FlashBender system is the best direct-flash-mount diffusion system I've used to date. The soft box option is excellent for macro photography and incorporating bounce and/or off-camera flash, the system is very good for more-general purpose use.