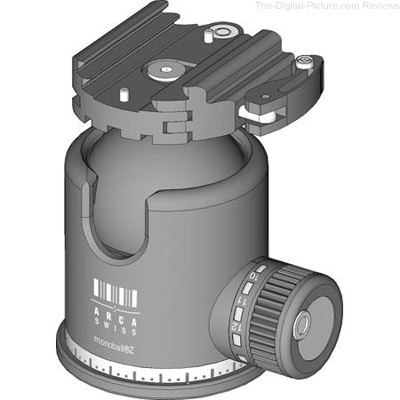 Update: Note that since I completed the Arca-Swiss Monoball Z1 Ball Head Review, the Z1 has had a design improvement - the drop notch has been moved 180 degrees in relation to the main friction control knob and the rotation clamp knob was also repositioned. The new design is shown in the top-most image in this review.

Overall, this change is a positive one, allowing (in many cases) easier use of the friction knob when the clamp is in the drop notch. The original Z1 model is shown here: 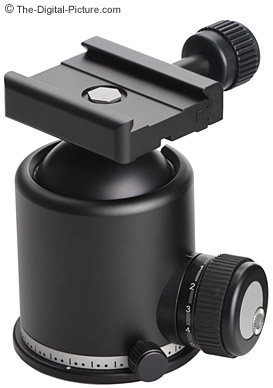 For many years, the Arca-Swiss B1 Ball head was the standard by which all other ball heads were judged. The Arca-Swiss Monoball Z1 Ball Head replaces this model and delivers the same performance in a smaller size and at a lower price. There is not much to dislike about this change. A brief intro to ball heads ... Ballheads are one of the best and most popular types of tripod heads available. As the name implies, a ballhead consists of a ball with a neck that allows various camera/lens mounting options to be attached to it. This ball lives in a socket within a strong metal housing with friction controls. The primary friction control, the main locking knob, is generally the largest knob with smaller controls adjusting ball tension and panning base friction (if so equipped). Camera/lens mounting options typically include a threaded screw or a one of a variety of quick release clamps. Ballheads are small, easy to use, strong and fast to setup and are the right tripod head type for most applications. The Arca-Swiss Monoball Z1 Ball Head is one of the best ballheads available - at any price.

Although it weighs only 1.5 lb (680g), the Arca-Swiss Monoball Z1 Ball Head is rated to carry 122 lbs (55.3 kg) off-axis. I can't imagine using something that weighs this much on a ballhead, but its high strength is important. The Z1 delivers rock-solid support to any camera/lens setup I want to mount on it.

Although strong, the Z1 is still precise and smooth. The main friction control remains easy to turn well past the point of the ball being locked tight (for any use I have at least) and is indexed for visual confirmation and repeatability. When making adjustments, the transition from free to locked is very smooth - small, precise changes can easily be made up to the point of locking. The main friction control knob has a small amount of play in it but only if you firmly pull out on it - I don't notice this in normal use as I have no reason to pull out on it.

Tension adjustment is via a small, silver, grooved thumb dial on the face of the main friction control knob. I don't change this setting very much, so I like having it easily accessible but out of the way and not easily changed by accident (such as getting the wrong knob when attempting a panning friction change).

One of the more noticeable changes in design from the B1 is the smaller and shorter panning base lock knob. A smaller diameter knob in this case means a little more effort is required to completely lock the base. I don't find this to be an issue, but it is a change.

The panning base friction is not completely even throughout its 360 degree rotation. My Z1 has a 15 degree or so section of slightly less-friction rotation - it gets briefly easier to turn. I would have never noticed this had I not been checking very carefully with the ballhead bare in my hands. And it rotates better than my B1 which I never noticed to have a symptom. The panning base is indexed with small circles at 5 degree intervals and lines at 15 degree intervals.

Unique to the Arca-Swiss Monoball Z1 Ball Head is the aspherical ball. As the load on the head is moved away from center, the effects of gravity increase. To offset the higher gravitational effect, more ball tension is needed. Conventional ballheads require correcting tension control adjustments to be made. The Arca-Swiss Monoball Z1 Ball Head, because of its elliptical ball, automatically adjusts to handle the off-center load. In other words, the tension automatically gets tighter as you move the load off-center. And it works as advertised. Very nice.

As is common with most ballheads, the Z1 provides one drop-notch. When you need to position the camera in portrait/vertical orientation or need to shoot at a hard downward angle, the ball neck can be positioned into the drop notch. This is a good time to mention that an L-plate on the camera drastically reduces the need for using the drop notch and dramatically improves the photography experience. I should also mention that a good tripod and careful setup should be used when using the drop notch as the off-center weight can tip an inadequate or inadequately-positioned tripod over - leading to costly repairs.

The Arca-Swiss Z1 camera/lens mounting options I've used are both of the quick release plate models. I bought the standard and slightly less expensive quick release plate with my current Z1 (shown above center). A thumbscrew loosens/tightens the clamp as desired. It works great but should have a captive knob in my opinion (Kirk Enterprises and Really Right Stuff make replacement knobs for this clamp).

The Arca-Swiss Flip Lock Quick Release (shown above left on a B1) is somewhat less than an intuitive design in my opinion. Actually, it took a friend to show me how to use it properly. Pulling the round silver release near the end of the lever unlocks the lever and allows it to rotate to a 90 degree position. That part was not too hard to figure out. At this point the clamp (when properly adjusted) is still holding the camera/lens plate snugly, though it can be moved. Now the part I didn't get on my own - the ribbed pin along the side of the lever (partially visible in the picture above) must be slid away from the lever hinge to allow the lever to rotate to a position 180 degrees from locked. Now the plate is completely released. This is not my favorite design, but it works fine. This release is faster to use than the standard screw clamp. As I mentioned, the clamp is adjustable (don't adjust it too far or the nut comes off) for the camera/lens plate you are using.

Both Arca-Swiss quick release clamps are available in a double panning version. This version is especially useful for panoramic photography. A second panning section is provided above the ball, just below the clamp. Set the tripod down, level the camera using the ballhead and pan with the second panning feature - the camera remains level. I have this feature in my C1, but don't personally need it very often.

The mounting platform I haven't used is the screw mount (3/8" or 1/4"). The screw mount is a round/flat base on the ball neck with a threaded screw in the middle. This mount attaches directly to the tripod mount threads on a camera or on a lens tripod ring.

The Arca-Swiss Monoball Z1 Ball Head measures 4" (10cm) high. Other than keeping it clean, the Z1 requires no maintenance and is backed by a 5 year warranty. I keep my Z1 in a Lowepro Lens Case 1W when not mounted on a tripod.

I mentioned in the beginning of this review that the Z1 (above center) is replacing the Arca-Swiss B1 Ballhead (above left). Although I doubt many people will upgrade from the superb B1 to the slightly-more-superb Z1 as the differences in functionality are small, the physical differences are indeed nice.

The physical differences include ... The Z1 is .5" (14mm) shorter and its panning base is narrower. The panning knob is shorter and smaller - this difference can be seen in the top-view photo several paragraphs above. The Z1 is lighter but only by 1 oz or so (on my digital scales). Cosmetic changes include a different panning index and a repositioned logo. The Z1 is rated for 122 lbs (55.3 kg) while the B1 is rated for 90 lbs (40.8 kg). The huge change for new ballhead buyers will be the far lower price.

The Really Right Stuff BH-55 (on the right in the comparison pictures) is another excellent ballhead that is often compared to the Arca-Swiss ballheads. I've used both (BH-55 and B1) about equally for the last year and can say that I'd be very happy with either. The RRS BH-55 is shorter (3.65"/85.4mm vs 4"/101.6mm) but wider and about 7 oz (198g) heavier at 1.96 lb (889g). The BH-55 main friction knob is most notably larger but the entire head is beefier (see the top-view photo above for a comparison that shows this best). The BH-55's load capacity is rated at a much lower but seemingly far more conservatively at 50 lbs (23kg). I still would not want to handle this much load on a ballhead.

RRS does not cut corners in manufacturing and insures their products look great as well as work great, but the price is a differentiator that shows this. The RRS BH-55 design (appearance) including laser engraved index markings and classy-looking knobs is a notch above the Z1 (which is nice). Really Right Stuff's Lever Lock quick release plate is nicer than the Arc Swiss equivalent but requires Wimberley or RRS brand plates (though these are the best anyway in my opinion). The Z1 uses an elliptical ball whereas the BH-55 uses a spherical ball. The BH-55's knobs are a higher grade than the Z1's. The Z1 knobs are all near the same location on the same side while the RRS head places them on opposite sides. The BH-55 sports a more-matte finish but also shows marks (fingernails, sticks ...) more easily. The BH-55 has two drop notches giving you a choice of two positions for the knobs when using a notch. The location of the drop notches are different as well - I think the BH-55 has a small advantage - especially when shooting downward.

In real use, I find the RRS BH-55 to slip/stick when making fine adjustments at a tight friction setting while the Arca-Swiss Monoball Z1 Ball Head remains smooth. The BH-55 is otherwise very consistent and repeatable. I also find the Z1 to lock tight with very little effort while the BH-55's main knob gets consistently tighter as the ball locks. My personal preference on this point is for the Z1, but you could just as easily prefer the additional pressure feedback provided by the BH-55. As I said before, I could be very happy with either ballhead.

Above from left to right are the Arca-Swiss B1 Ballhead, Arca-Swiss Monoball Z1 Ball Head and Really Right Stuff BH-55 Ballhead.

Overall, Fit, finish and functionality of the Z1 are exceptional. The Arca-Swiss Monoball Z1 Ball Head is currently my primary ballhead. This is a smooth, refined and solid camera/lens support.

I'll leave you with the Z1 marketing announcement direct from Arca-Swiss (who currently has no online presence) ...

Leader of tripod head design for over 40 years, ARCA-SWISS is setting new standards revisiting their B-series models and introducing the new Z-Series—just as elegant, and even more perfect. The size and weight of the ball heads have been significantly reduced. The ball and fastening are now assembled using a patented bayonet mount. Various accessories can thus be quickly mounted to adapt the tripod as required. 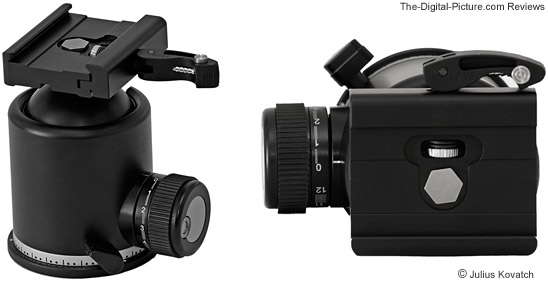 Late breaking news: The Arca-Swiss Monoball Z1 Ball Head is now shipping with a lever panning base lock as shown above. This should be a nice improvement - the base should be easier to lock tightly.