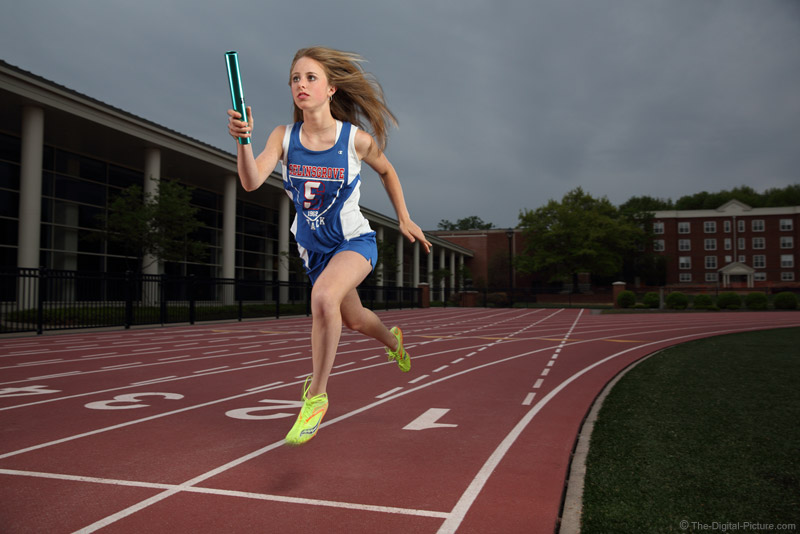 Brianna, my high school senior, has had a very successful high school track career from multiple perspectives including having her name on three school records. This success did not come without a huge effort on her part, and we had discussed shooting a more-formal senior picture highlighting her passion for mid-distance running. Track season became busy and I shot many images of her competing, but time got away from us and suddenly we had only one evening remaining before she had to turn in her uniform.

The weather forecast for that evening called for scattered showers and we were watching the radar very closely. I was packed and ready, and we decided to go for it. After determining the ideal location on the track to shoot at, I began unpacking.

I had three Canon 600EX-RT Speedlites and a Canon ST-E3-RT Speedlite Transmitter to control them with. Two Speedlites were mounted on background light stands (small, light and simple) with Justin Clamps used to hold the Speedlites to the poles at any height I wanted. The third Speedlite was mounted to a weighted light stand with a 60" reversed/shoot-through umbrella mounted to a Manfrotto umbrella adapter.

I first mounted the umbrella to the stand and almost immediately a light rain began to fall. I quickly put Brianna, who feared that her hair and makeup would be ruined, under the Photogenic "umbrella". The rain mostly passed within 10 minutes or so and we went to work.

The two flashes on background light stands were set to group B and used as rim lights, placed to the side or slightly behind the subject as composition allowed. The shoot-through umbrella's flash was set to group A and used as the main light. Ambient light (for the entire background) was controlled through a manually-set camera exposure. The flashes were in E-TTL mode and +/- exposure for the two groups was controlled by the ST-E3-RT's Group mode.

While this may all sound complicated, it was not. Setup was very simple and I was able to quickly and easily adjust/balance the ambient, main and background light levels from the camera. While the rain stayed away for much of the two hours we were shooting, it did not fully stay away. Fortunately, this entire kit, including the Canon EOS 5D Mark III and Canon EF 24-70mm f/2.8 L II USM Lens, was weather-sealed and we were able to make many great images in this time.

I had planned this shoot for an evening so that the flashes would be able to overpower the ambient light levels, though I had hoped for a bit more light than we had. The aperture was wide and the ISO was moving up by the end of the evening. Still, the shoot was a big success for us.

Even selecting this particular image from the many shots of just this pose was difficult. With lighting dialed in, I had Brianna repetitively start from specific position on the track and take one big stride with her left knee and right arm (with the baton) forward. I timed the shutter release (a short shutter lag is extremely useful in this situation) for a near-top-of-stride subject position that coincided with the lighting setup. The composition was arranged to take advantage of the lines on the track.

With a wireless flash system and a little effort, we created the images we had envisioned.