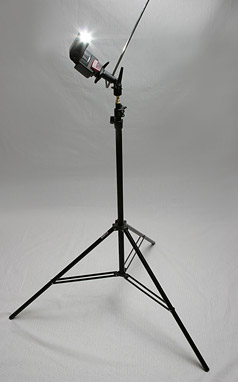 It can be used with an umbrella adapter (such as the Bogen Manfrotto Swivel Umbrella Adapter), an umbrella (such as the Photogenic Eclipse 60" Umbrella) and a flash (such as the Canon 580EX Flash, Canon 550EX Flash or Canon 420EX Flash) to create an inexpensive portrait lighting setup.

I selected the black version of this light stand to avoid any reflections the aluminum version might generate.

I have no reserve in recommending the Manfrotto Light Stand.