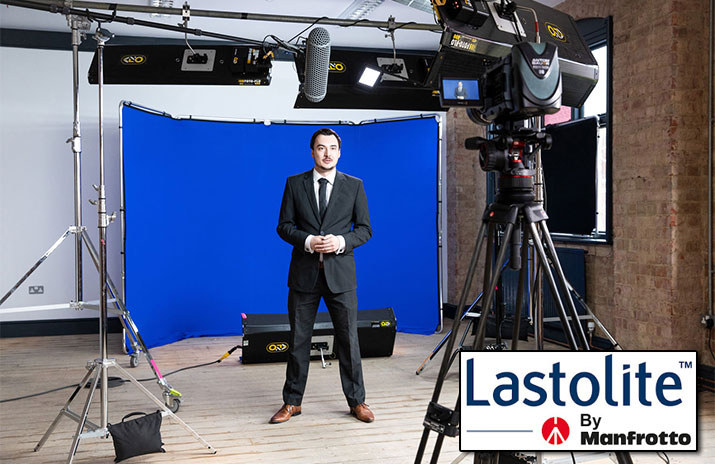 Upper Saddle River, NJ - MAY 21, 2019 - The Lastolite Panoramic Background is a collapsible 13’ (4m) wide, 7’5” (2.3m) high background that folds down neatly into its own carry case and fits easily into a car. Weighing only 19.8lb (9kg), it’s ideal for busy image-makers on the move. The background is completely self-supporting and can be set up in minutes. The structure comprises three individual aluminum framed sections, connected together with a hinge clip to allow the background to be set up flat to lean against a wall or with the side frames folded in to create a wraparound effect. The Chroma Key Blue cover simply clips to the aluminum frame and creates a taught, seamless surface.

The background is ideal for live stream and post-production keying projects. Its impressive 13' width creates enough working area for multiple camera angles and subjects. Although the brushed fabric is incredibly non-reflective, the height and width combined is enough to place the subject(s) at a good working distance from the background eliminating risk of any color spill from the Chroma Key Blue surface.

Whether you are shooting a single person, a larger group or even products, the Lastolite Panoramic Background offers ultimate versatility. The wider format allows the image-maker to introduce props and accommodate animated poses from the likes of dancers or athletes. The Chroma Key Blue now sits alongside the highly successful Chroma Key Green, Black, White, Granite and Limestone versions.

All models are available at select Authorized Lastolite Dealers. 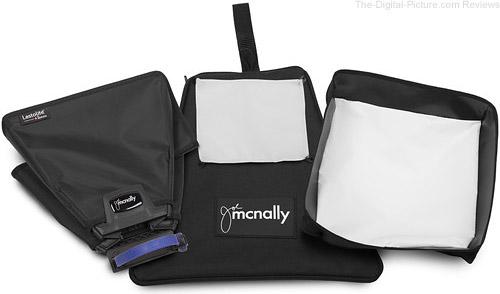 Joe McNally Ezybox Speed-Lite 2 Plus - A quick and easy way to create a soft, flattering quality of light from your on-camera flash.

The Ezybox Speed-Lite 2 Plus includes Joe’s preferred white interior for a softer/creamier look, as well as a removable internal diffuser and a deep recessed outer diffuser to reduce any unwanted spill of light. The 8.5” x 8.5” mini softbox features a unique, design-patented folding mechanism with an innovative twist lock silicon strap for a quick and secure attachment for your flashgun, making it an ultra-portable, quick assembly softbox.

Incorporated within the internal folding mechanism are also two magnets that enable quick attachment of the Lastolite by Manfrotto Strobo Honeycomb and Gel Holders for creative control of the light from the flashgun. 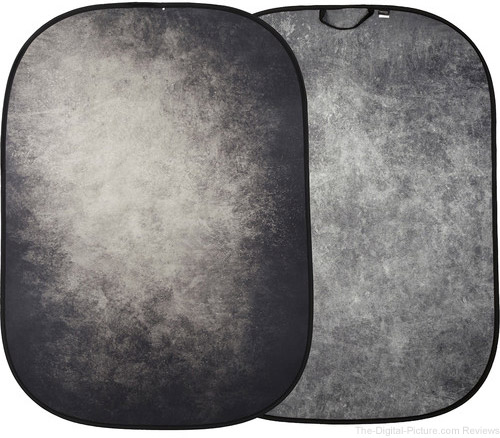 This versatile 5’ x 7’ reversible background provides a timeless hand painted backdrop look that subtly complements the chosen subject. The darker of the two surfaces, Smoke, offers a combination of grey tones with a subtle hint of green and features a dark vignette effect. The reverse surface, Concrete, offers a more evenly distributed grey tone texture. Collapsible to a third of its original size due to the sprung steel band, this background is quick and easy to collapse for ease of use and storage. The background comes with its own carry bag, making the product easy to transport and safely store.

The Lastolite by Manfrotto Joe McNally Ezybox Speed-Lite 2 Plus and the Smoke/Concrete Urban Collapsible Background are now available nationwide:


B&H has the Lastolite by Manfrotto Joe McNally Ezybox Speed-Lite 2 Plus and Concrete Urban Collapsible Background available for preorder. 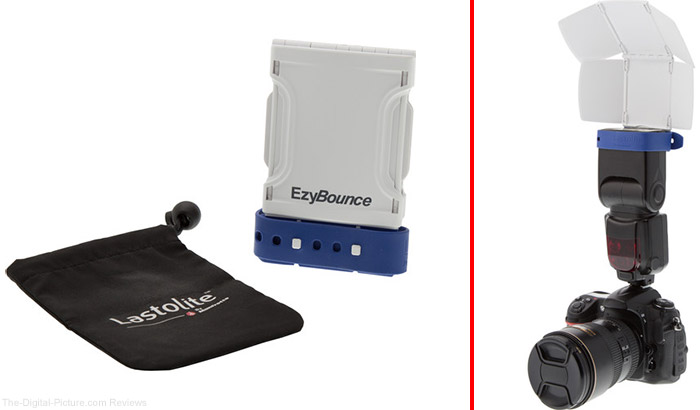 December 2015 – Manfrotto, world leader in the photography, imaging equipment and accessories industry, announces the launch of a new compact and foldable Lastolite by Manfrotto EzyBounce Bounce Card. Specially designed for beginner and advanced hobbyists who like to take pictures of people and events, such as a wedding or a party with friends, this bounce card helps to create a softer light towards the subject and thanks to its small size it can be carried in a shirt’s pocket.

ADAPTABLE AND IMPACT RESISTANT
The new Lastolite by Manfrotto EzyBounce fits all standard flashguns available on the market. It features a secure fixing system with a silicon strap to securely attach the card to the flashgun and is made from impact resistant ABS (glass re-enforced plastic) to stand up to different types of crashes.

SMALL AND PORTABLE
The expandable surfaces allow different configurations and a multiple usage of the Bounce Card: when in use it can create soft light towards the subject and can also redirect the light of your flashgun (for example, on the ceiling when used indoors).

With a wide white surface for maximum reflection when opened (18x19cm), the new Lastolite by Manfrotto EzyBounce collapses to a third of its original size when closed (11x7cm). You can bring your card anywhere and store it in a small pocket.

Make unique your event pictures with a soft and surprising light thanks to the new Lastolite by Manfrotto EzyBounce. 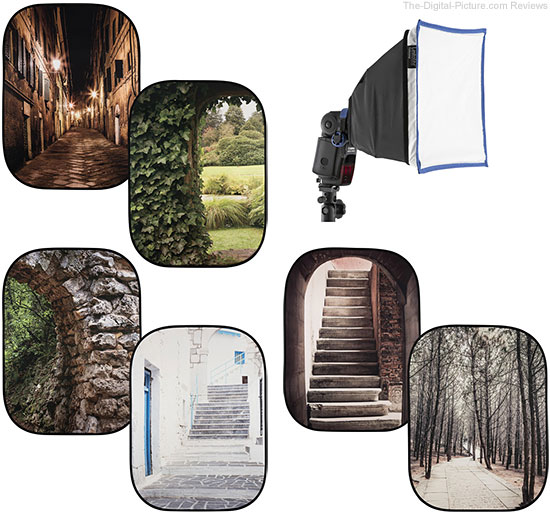 Manfrotto, the world leader in photography, imaging equipment and accessories industry, announces Lastolite By Manfrotto, a Co-Branding project that will involve Lastolite’s entire range of products. This co-branding will promote the cross selling between the products and will lead to a better shopping experience for customers thanks to the new packaging with a renewed look and feel. Lastolite by Manfrotto products will have the Manfrotto quality guarantee.

The First Two New Products Under the New Rebranding

Lastolite by Manfrotto starts this co-branding process with the launch of two new products, perfect for portrait photography: EZYBOX SPEED-LITE 2 and the PERSPECTIVE BACKGROUNDS.

Fulfilling the daily needs of hobbyists and professional photographers, the Ezybox Speed-Lite 2 is an improved version of the existing Ezybox Speed-Lite. The New Ezybox Speed-Lite 2, light and easy to use, is suitable for on and off camera use. With removable internal and external diffusers, it represents the best small and compact solution (22x22cm) for the photographer who needs peerless softness of light.

A new silicon strap and ratchet knob enables to adjust the strap tension according to the flashgun, ensuring a secure fit. Ezybox Speed-Lite 2 is easy to set-up and collapse, and to store away thanks to the new folding mechanism. The product is packed in a color carton box with images that illustrate the product’s use.

The Perspective Backgrounds can be attached directly to the Magnetic Background Support System, designed for collapsible backgrounds and are easy to store thanks to its practical blue bag.

B&H has the following gear available for preorder:

Lastolite has extended the inspirational range of Urban backgrounds to now offer even more options to photographers looking to create the outdoor look in any location. Each reversible background has a unique urban feel and can quickly add a new dimension to any portrait shoot. The collapsible backgrounds are portable and quick to set up; offering the ultimate solution to today’s busy photographers.

Outdoor Look in Any Location

Bring the outdoors, indoors; saving the time and costs related to finding the right location.

Lightweight and collapsible, the Urban backgrounds are the perfect solution for photographers on the move.

Lastolite is proud to announce the Joe McNally Signature Series of light modifiers. These products are take-offs of already existing great Lastolite products, but decidedly with professional photographer Joe’s touch.

Joe McNally TriFlip Kit (LL LR3996JM)
• New size of TriGrip, about 35.4”.
• Base is translucent.
• First cover is Silver, Softsilver, Gold and White.
• Second cover is a double sided black cover with a square that can be pulled out to create a hard edge.

Joe McNally UpLite (LL LR3497JM)
• Same as the standard UpLite 4:1 but includes a 3’ x 4’ diffuser panel.
• Diffuser can be used to create a ground level direct or indirect softbox effect.
• Self supporting reflector/diffuser panels.
• 30 to 80 degree positions.
• Ideal for outdoor use.

Vitec, the international provider of products and services for the broadcast, photographic, and MAG (military, aerospace and government) markets, announces that it has acquired the entire share capital of Henry Holdings Limited ("HHL"), for a cash consideration of up to £9.75 million (the "Acquisition"). HHL is the owner of Lastolite Limited in the UK ("Lastolite").

Based in Coalville, Leicestershire, Lastolite employs approximately 80 people and is a leading designer, manufacturer and supplier of lighting control accessories and backgrounds for the photo, video and cinema industry. Established in 1986, Lastolite produces highly innovative products for the keen amateur and professional photographer. It is also the owner of the Colorama brand of paper backgrounds.

The Acquisition will complement Vitec's existing range of Manfrotto lighting supports and LED lights with lighting control accessories, thereby strengthening the Company's position in this part of the accessories market.

Lastolite will operate as a standalone business within Vitec's Imaging and Staging Division. Lastolite's existing senior management, including the Managing Director, Sean Henry, will be retained by the business reporting to the Divisional Chief Executive, Francesco Bernardi.

Under the terms of the Acquisition, an initial consideration of £8.75 million was paid on completion and is subject to post-completion adjustments for changes in net assets. Up to a further £1.0 million is payable in 2012 based on operating profit for the year ending 31 December 2011. At completion, Lastolite had net cash balances (net of liabilities assumed by Vitec) of £0.3m. Consideration has been paid in cash, financed out of Vitec's existing revolving credit facilities. The Board expects the Acquisition to be earnings enhancing (on an adjusted basis) in the year ending 31 December 2011 (see note 1).

"We are delighted to announce the acquisition of Lastolite, which is in line with our strategy of broadening our lighting offering within the photographic market. The Lastolite business and its management are well known to us and we look forward to the Lastolite and Manfrotto teams working together, sharing distribution and sales opportunities."