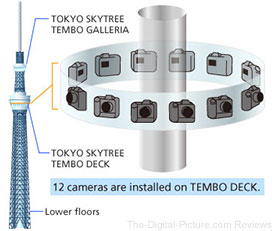 "TOKYO SKYTREE® went into operation on May 22, 2012, as a broadcasting tower for digital terrestrial broadcasting and as a general tourist facility designed to promote local development. At a height of 634 meters, it is currently the tallest free-standing broadcasting tower*1 in the world. TOKYO SKYTREE was entered in the Guinness World RecordsTM as the "world's tallest tower" on November 17, 2011.

"The Multi-Camera Control System consists of 12 D3S digital single-lens reflex cameras installed on TEMBO DECK, the observation level at 340 meters, that continuously photograph the 360° view 24 hours a day. The images that are shot are transmitted to PCs in TOKYO SKYTREE's server room. This is where the images are stored and the camera settings are made. The interval between photographs can be set to any duration of not less than 30 seconds. The current settings are for 10-minute intervals between photographs during the daytime and 60-minute intervals at night. However, there are times when the interval will be purposely reduced—for events such as the Sumida River Fireworks Festival or when images of particular interest such as photographs of rainbows, lightning and typhoons are anticipated."