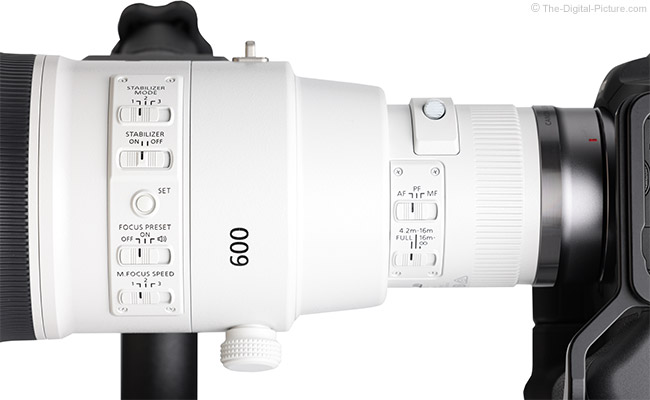 The first piece of important information to share is that the Canon RF 400mm F2.8 and 600mm F4 L IS USM Lenses are essentially identical to their EF IS version III counterparts except for a brushed metal EF to RF mount adapter built in (and the focus distance window is removed). The RF 400 and 600 are equivalents to the EF 400 and 600 with a Mount Adapter EF-EOS R behind them. This includes optical and mechanical performance.

It is easy to say that Canon took the easy way out when creating the 400mm f/2.8 and 600mm f/4 lenses for the RF mount, and it is also hard to argue against that statement.

However, it is unlikely that optical advances significant enough to justify a new design became available since the EF lens introduction less than 3 years earlier. Also, since lens models go into the design phase long before they are announced, it is probable that the EF 600 III was already designed for optimal use on the RF mount. That Canon's first R-series camera, the EOS R, was introduced in the same announcement as the EF 600 III lends credence to that theory. Also noteable is that long focal length lenses tend to benefit less from the short flange distance on the mirrorless camera models, reducing the justification for a redesign.

Why bother introducing the RF model if the mount is the significant design improvement, and compatibility with EOS DSLR Cameras is foregone? Eliminating the mount adapter creates a slightly tighter, more secure fit and reduces weight slightly for two minor benefits. The adapter is no longer at risk of being forgotten or lost.

An interesting benefit provided by the technology in the RF mount (specifically) is a CIPA image stabilization assistance rating increase to 5.5 stops from 5 stops.

Perhaps the biggest benefit of the built-in RF mount is compatibility with the Canon RF 1.4x and RF 2x Extenders, a compatibility the Canon mount adapter (probably) should have availed. I'm anxious to see how well the RF extenders perform with the new RF super-telephoto lenses.

While I plan to replace my EF 600mm version III lens with the RF version, the new RF 400 and 600mm super-telephoto lenses are practically the same as their respective EF lenses, including having the same price.