A Surfer in Savannah – a.k.a., Why You Should Have a Backup for Everything 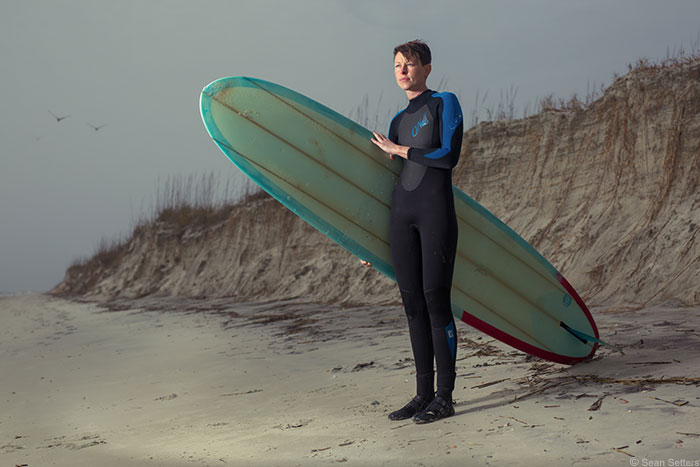 Being a surfer enthusiast in Savannah, GA is a rough life; the waves found along Tybee Island (the nearest beach) are rarely conducive to "hanging ten." Such is the story of Dagny, someone who loves to surf but rarely finds conditions here favorable for her pursuit. On this day, however, the waves were "ok" and Dagny had just finished about an hour of surfing along a nearby shoreline. She had obviously been having fun. I, on the other hand, had been plagued by one issue after another since arriving at the beach at 9:00am. Let me explain.

When I arrived at the south end of Tybee Island to meet Dagny at 9:00am, there was a fairly dense fog along the shoreline. Dagny wanted to do some surfing but also wanted a picture, so the first question to answer was, "Which do we do first?" Since the waves were looking good to Dagny and the fog was looking questionable from a photographic standpoint, I told her to go ahead and surf and I would signal to her when I was ready to start shooting. This would allow me time to scout out a suitable location, set up my lighting gear and hopefully give the fog some time to clear. In hindsight, telling Dagny to hit the waves ahead of our shoot had another great benefit; it allowed me time to methodically work through the problems I was destined to face without having an increasingly impatient subject stare on with resentment for stealing her away from the best waves of the day.

When shooting at the beach, I generally prefer to transport only the items I intend on actually using to the sandy location. This approach lessens the amount of cleanup necessary once the shoot is finished. However, a downside of this technique is that if technical issues are experienced, one is required to go all the way back to the car to retrieve backup items. As I would come to realize, that's a pretty major downside.

After scouting out a good location on the beach, I went back to my car in a [relatively] nearby parking lot to plan out my gear needs. At that time, it was still quite foggy and I was unsure if it would clear completely before we started shooting. I decided that limiting the amount of space between the subject and me would be a good idea for optimal contrast. Therefore, I opted for a Sigma 50mm f/1.4 DG HSM Art Lens on my Canon 5D Mark III instead of the Canon EF 135mm f/2L USM Lens I had originally planned on using.

I'm always leery about using a softbox and/or umbrella on the beach because, even with sand bags in use, the large surface area of those modifiers can cause significant problems when wind is added to the equation. However, I love the soft light I get with softboxes and umbrellas, so they are generally my first choices if the weather allows for their safe use. The beach wasn't as windy as it has been in the past, but... I still didn't think it was a good idea to attach what amounts to a sail to my light stand. Therefore, I opted to mount a Mola Demi Beauty Dish (with Opal Diffuser) to my White Lightning X3200 studio strobe, powered by a battery pack. The 22" diameter, sturdy metal modifier has proven to be a solid choice in the past in windy conditions, so I was glad I brought it.

After transporting my light stand, studio strobe, beauty dish, battery pack, power cord, radio trigger with cord and two sand bags to the beach, I plugged everything in, turned on the battery pack/strobe/radio trigger and pushed the "Test" button on my trigger to fire the strobe.

Ok Sean, let's work the problem. Are the trigger and receiver on the same frequency? Yes. Am I sure I turned on the trigger? It doesn't appear to be blinking (a sign that it's on). I pressed the receiver button again (which should trigger the strobe in addition to turning the unit on), but nothing happens.

"Ahh, the batteries in my receiver are dead."

So, off to the car I went. While I did have some extra batteries in the car, I chose instead to grab a different radio receiver as the batteries are somewhat difficult to replace in these things. And, back to the beach.

With the new radio receiver plugged into the studio strobe (and blinking), and everything powered on again, I hit the test button on my trigger and... again, nothing. However, a quiet moment between the waves and various beach sounds reveals a barely audible beeping coming from my battery pack. It doesn't usually beep, so my guess is that it's trying to tell me something (later tests would reveal that my battery pack's battery had just failed). Once again, it's time to go back to the car with a nearly 20 lb battery pack so that I can return with its replacement (an identical unit).

This is getting old. At this point, everything I've replaced has been a validated problem. The radio receiver's batteries were dead and the unit was replaced with a working one. The battery pack's battery had failed (even though it had been charging all night). Now, even with those issues resolved, my strobe still wouldn't fire. In one last Hail Mary attempt, I dragged my White Lightning x3200 back to the car to replace it with a Whilte Lightning Ultrazap 1600 that I had also brought along.

After returning to the beach with the new studio strobe, I once again plugged everything up, turned everything on and hit the test fire button.

Success! The flash fired just as Dagny was walking to our shooting location. She needed a break from surfing, and her timing could not have been better.

The fog had mostly cleared by the time this image was taken, so I wouldn't have technically needed to use the Sigma 50mm Art lens in place of the Canon 135mm f/2L, but I liked the view I was getting at 50mm, so I think it worked out for the best. I performed basic edits in Adobe Camera RAW and changed the color tones of the highlights and shadows and, after importing to Photoshop CC, I used the Content Aware Move Tool to reposition the three birds for better framing (they were originally more spread out and lower/closer to the left edge of the frame). I also used the Content Aware Healing brush to remove a very long zipper pull that was flapping in the wind.

If you'd like to see what it was like on the shoot after all the problems had been worked out, check out this behind-the-scenes video.


This was one of those shoots where it seemed that everything that could go wrong did go wrong. However, having a backup of everything (I also had a backup camera along) meant that I could deal with the problems that cropped up and ultimately capture an image that I was very proud of. When shooting on-location, do yourself a favor – bring a backup of every vital piece of equipment you're taking. You'll often find yourself falling back on one of your backups. And someday, you may find yourself needing a backup for everything.

A larger version of the image can be seen on Flickr.