Color Me This, Color Me That – Another Creative Way to Use Color Flash Gels 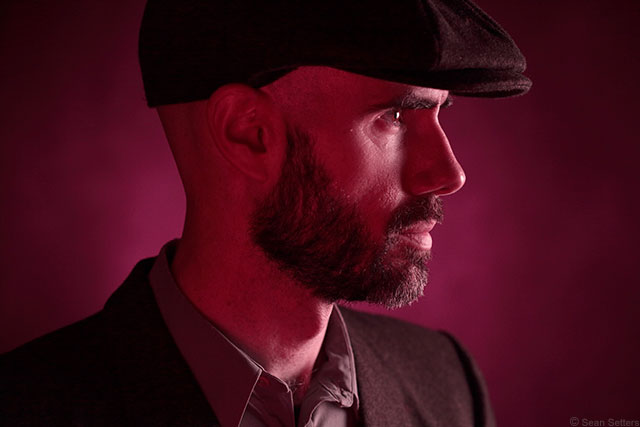 Take a look at the picture above and try to guess which color gels were used to create the in-camera effect. Then read on.

Last week, Patrick, a friend of the site, emailed us asking for advice on how to photograph school children, in costume, for an upcoming performance of Peter Pan. Patrick said that he would be photographing about 70 kids and would be creating formal portraits in a gymnasium before the kids' initial performance. He had all the necessary equipment, but he simply wanted some guidance on the lighting setup.

During our email exchange where we discussed different ideas and setups, I suggested that Patrick might use 2 CTO (orange) gels on his main light and set his camera's white balance to a very cool Kelvin value to get a warm main light against cool (ambient or ungelled flash) fill and/or background light that might simulate theatrical lighting, the same technique that I described in a post from last year.

In the end, Patrick decided to go with a more traditional lighting technique that yielded great results. But the email exchange got me thinking about how opposite colors, like orange and blue, can be used to create intriguing images.

With a single (or stacked) CTO gel(s), you can vary the color intensity of the gelled light – even to white – in-camera by how much you shift your camera's white balance to blue (for example, using a low Kelvin white balance setting). That means you may be able to neutralize any color by shifting the white balance opposite direction (that's exactly what Auto White Balance does). But that also means that we can shift the color spectrum of our image to the opposite color of any gel by telling the camera that a neutral color target lit by the gelled light is actually neutral with Custom White Balance.

With that in mind, take a look at the image atop this post again. What gel (or gels) were used to create the in-camera color effect?

Gelling a Flash to Produce the Opposite Color

To test out this idea, I flipped through my collection of color gels until I found one that intrigued me – dark green (not the much lighter Plus Green). I honestly couldn't remember what the opposite of green was on the color spectrum and had to ask Google to help me out. The answer, of course, was red. I set up a tripod-mounted Canon EOS 5D Mark III and EF 100mm f/2.8 Macro USM, a couple of Canon Speedlites and a mottled gray background for a self-portrait.

The first thing I needed to do was photograph a neutral target using the gel. But instead of gelling the flash, I decided to gel the lens. Why the lens? Because my gel was big enough to cover the front element of the lens I was using and, if I had to illuminate a large [white] color target with multiple lights (for example), it would be easier to gel the lens rather than each individual light. I had never tried gelling a lens before, but it seemed to make sense for this purpose. I photographed a white target that filled the frame, illuminated by a bare Speedlite (very low power), using the green-gelled lens. I then used the image to set a Custom White Balance in-camera.

I put a flash grid on a Speedlite and pointed it at the background. A few test shots proved I was on the right track; the illuminated areas of the background were red. Now it was time to tackle the main light. I decided to use a gridded 24" collapsible soft box (similar to this) and positioned the soft box so that its light didn't contaminate the background (camera right, slightly behind me, pointed slightly toward the camera). I attached two gels to this flash, the green gel that I had used to create the custom white balance (in essence, turning the flash's output white) and a full CTO to provide some warmth.

As for the fill light, I decided to simply open the curtains on the windows behind the camera and let the daylight ambient light left the shadow areas. I reasoned that the indirect sunlight would be close enough in color to my bare flash that the effect would be similar, and even if they weren't, exact/precise color balance wasn't necessarily the point of this exercise. As long as the result looked interesting and illustrated the concept sufficiently, I was going to be happy. However, a few test shots confirmed that the color of the fill light looked similar to the light on the background, at least as far as this colorblind photographer was concerned. I also know that adding the additional CTO to the main light likely caused a less pronounced difference between its color and that of the background, but I thought the less dramatic color shift would make the image look a little more organic. After it was all said and done, I had a portrait with a red background and a red fill light with a much-less-red-tinted main light – in camera – without using a single red gel. EXIF for the image was f/4, 1/160 sec, ISO 800. In hindsight, I could have easily used a slower shutter speed and a lower ISO, but I was so used to using 1/160 second when using off-camera flashes with radio triggers to kill the ambient that I didn't think to adjust the shutter speed when I actually wanted the ambient to play a supporting role in the lighting.

When might this concept come in handy? Well, if you wanted your overall scene to be a certain color, but you didn't have that color gel in our kit, you could use the opposite color to shift your white balance to get similar results. Or, if you simply don't have enough gels for a multiple light setup, you could again shift the color spectrum of all your lights using a gel of the opposite color. This won't likely be a technique that gets you out of a jam, but... it can certainly be a fun technique to experiment with, and thinking about color balance and how to manipulate it in different ways may prove beneficial down the line.