Friday Fun: Can You Guess the Lighting Setup? 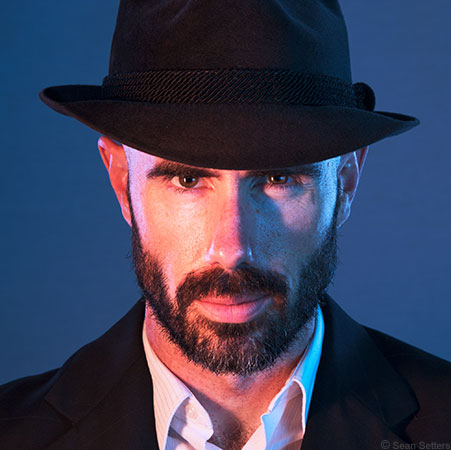 It's a slow news day, so let's have a little fun. Can you guess the lighting setup for the self-portrait shown above incuding the number of lights, their positions and modifiers used (including colored gels)? Hint: There were 3 individual gels used, but none of them were CTB (blue).

Click on the image to download a higher resolution version (looking closely at catchlights in the eyes can provide clues to lighting).

Post your guesses in the comments. I'll reveal the lighting setup around 4:00pm Eastern Time unless someone makes a correct guess, at which time I'll confirm the setup.

Several of the commenters got very close in their guesses on the setup. As some guessed, the camera's white balance was set to a value to render un-gelled flashes very blue. As I only wanted one flash in the setup to be warm, shifting the white balance saved me the trouble of having to gel three different lights with CTB gels.

There were actually 4 flashes/monolights in the scene. The main light came from Canon Speedlite 580EX flash diffused by a small 16" softbox camera left. It had (2) full CTO gels on it (1 to offset the camera's white balance setting, the other to add warmth). I felt that the 16" softbox was just too big for what I wanted, so I ended up draping a black t-shirt over most of it and leaving a strip about 2" wide uncovered along the edge.

The fill light camera right was provided by a 580EX bounced into a white umbrella (with black backing). This light was gelled with a 1/2 green gel and positioned so that any shadows cast on the background would fall outside the composition (even when left in the original 2:3 ratio). The fill light is what's responsible for illuminating the background (white/collapsible).

You might wonder why I decided to add a 1/2 green gel to my fill light. My inspiration for testing out this lighting setup came from David Hobby's recent Lighting 103 post where he discusses several of Greg Heisler's techniques for lighting with color for a more natural, seemingly organic look. Greg often adds a plusgreen gel to a CTB in order to give it a more realistic, believable (less perfectly blue) color.

I originally shot the scene with the camera set to Tungsten white balance, but I ended up pushing the white balance a little cooler in post processing to lessen the CTO's effect slightly.