Should I Get the Canon EOS-1D X Mark II or the Sony a9? 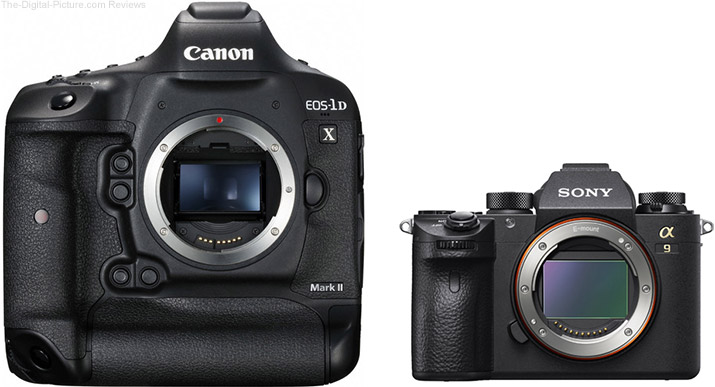 The release of the Sony a9 introduced yet another intriguing option in the pro sports photography market. As such, you may be curious as to how Sony's first sports-oriented mirrorless full frame camera stacks up against Canon's top-of-the-line full frame DSLR, the EOS-1D X Mark II.

Let's first take a look at some of the high level features where the two cameras differ to see how they contrast with one another:


By specifications alone, the Sony a9 seems to one-up the Canon 1D X II in almost every major spec category (differences in memory card formats aside). However, the specifications only tell a part of the story; other factors must be considered before deciding between these two cameras.

As indicated by the table above, the Sony a9 is smaller and lighter than the Canon 1D X II. And as also evidenced by the table above, a downside to the smaller body is the inability to house a large battery. In other words, you can likely shoot more than twice as many images with the [significantly larger] 1D X II before the battery is exhausted. Adding a battery grip to the a9 doubles battery capacity and adds the extremely useful vertical control buttons, but inevitably reduces the size and weight advantages of the camera.

Compare the lens selection above to the Sony E-mount lenses available now with a focal length of 300mm or greater:

Sony likely has several long telephoto lenses currently in development. However, it's very difficult [i.e., impossible] to take great sports images with lenses that are simply unavailable. For the meantime, Canon likely has a lens to cover your sports needs, no matter what sport you're photographing.

Of course, you can use non-native lenses with the Sony a9 when adapters are thrown into the mix. However, expect the AF performance of adapted lenses to be negatively impacted.

Viewfinder implementations differ significantly between the Canon 1D X II and the Sony a9, where the Canon body offers a traditional optical viewfinder (with customizable overlays) and the Sony body features an electronic viewfinder. Each type of viewfinder has benefits and drawbacks compared to the other (such as an EVF's elimination of viewfinder blackout times), and Bryan shared his thoughts on the advantages/disadvantages of electronic/optical viewfinders in his article, "Comparing Electronic Viewfinders to Optical Viewfinders" . Be sure to check out the preceeding information to determine which of these systems you may prefer.

With Canon's tendency to be relatively conservative regarding its 1-series updates, it's safe to say that you can expect their top-of-the-line series to perform reliably in the field, with robust weather sealing keeping the camera operational in adverse conditions.

Indeed, the a9 isn't Sony's first foray into the full frame digital camera market. However, it is the first camera Sony has designed specifically for sports photography and the rigors that pursuit entails. The Sony a9 may prove to be as reliable as the 1D X II, but... the first iteration of a company's product line is rarely as refined a competitor's benefitting from many more years of experience in design and manufacture.

While we didn't stress test the camera, the Sony a9 with its magnesium alloy frame and weather sealing is designed for the rigors that professionals encounter. Three hours of clay dust created at a dirt track sprint car race turned the camera red, but this issue was completely mitigated by an air blower.

Based on our tests, the Sony a9 focuses in extremely low light, similar to the 1D X II. Focus accuracy in One Shot mode/ AF-S single focus lock is also very similar between the cameras, although the 1D X II is noticeably faster in One Shot AF mode as the a9 defocuses before focusing again even when the subject has not moved. With subjects moving at a constant rate of speed, the a9 does an excellent job of tracking subjects. However, from our experience, the 1D X II tends to track erratic subjects better and maintains subject tracking as those subjects get closer to the camera.

Of course, it's impossible to perform a complete, exhaustive, apples-to-apples comparison between the two cameras' AF systems because conditions are never precisely repeatable. It's possible that either camera’s AF performance could be situationally improved by adjusting the focusing parameters from the default settings.

Canon is widely recognized as having an excellent support system, including (not not limited to) Canon Professional Services, the division which specifically caters to those who make a living with their imaging gear. The support we have received from Canon USA and Canon Professional Services has over the years has been very good. Canon USA's Customer Service Technicians have been eager to help and knowledgeable when we have needed phone support, and our experience with Canon's repair department (in the few times we've needed a repair) has been equally satisfying.

On the other hand, Sony is still in the building process when it comes to customer support for their E-mount camera system. As such, they don't necessarily have a reputation for exemplary customer service [yet]. And that reputation (or lack thereof) is seemingly appropriate, at least considering our own [minimal] experience with Sony Support.

At the time of this comparison, the Sony a9's MSRP is 25% lower than the Canon EOS 1D X Mark II's MSRP, and that translates to a not-so-insignificant savings. If you're ready for the Sony a9 ecosystem, that savings will certainly be appreciated. For a more versatile, similar-to-a-1D-X-II setup, you may wish to use some of the savings to pick up the Sony VG-C3EM Vertical Grip and an extra battery for increased shooting time and better handling with larger lenses.

Unfortunately, your savings experienced by purchasing a Sony a9 may be negated as your lens kit grows, as comparable Sony lenses tend to be more expensive than their Canon counterparts. Check out the Sony a9 vs. Canon EOS 1D X II vs. Nikon D5 price comparison table near the end of the a9 review.

So which pro sports camera body is best for your needs? Well, if you're planning on making a living shooting sports imagery in the very near future, or you've already invested heavily in a Canon system, the EOS-1D X Mark II would likely be the best choice.

However, if you're a semi pro or enthusiast sports shooter, and you haven't already invested heavily in a particular camera system, the Sony a9 shows obvious potential and is definitely worth considering if its current lens lineup is appropriate for your needs.