A Macro View of the Eye: Take Two 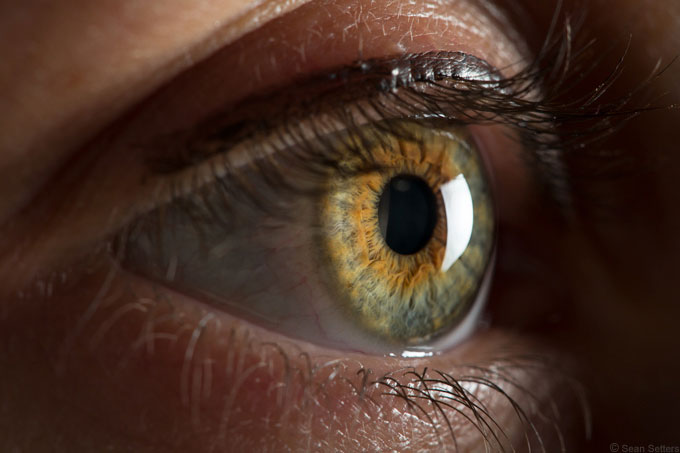 Earlier this year I posted a walkthrough for an eye image I took using the Roundflash Ringflash adapter. While I liked the image, I thought a different lighting setup might work better to highlight the details of the eye (especially the iris). Over the past week I've been trying a few lighting setups and ultimately came to the conclusion that a simple, single light setup provided the best results.

The biggest problem with the ring light, straight-on lighting approach was that the finer details in the iris became muted due to reflected light. This time around I decided to try a [near] profile view with the main light located slightly behind the subject.

The light source – a Canon 580EX in a 24" collapsible soft box – required precise positioning in order to create a column of light on the iris. The light was placed so that the subject's nose blocked light on the far side of the eye while the natural curvature of the subject's face (and eye) caused most of the left side of the image to be shadowed. I decided to use a white foam core reflector to open up the shadows on the left side just a bit. Note that the reflector is positioned far enough left so as not to create a second catchlight in the eye.

Using a tripod, I set the camera at the proper height to allow the subject to stand comfortably while capturing the image. At 1.0x magnification, very slight changes in distance to the subject can have a dramatic effect on focus. Even standing comfortably, the subject would sway a bit (almost imperceptibly unless looking through the viewfinder). This meant that I had to pay attention to the rhythm of the subject's movements in order to time the capture for optimal focus. If I were to shoot this again, I would have the subject sit in an arm chair with their head propped up on a fist to reduce involuntary movement.

When photographing an eye, it's also important to pay attention to the ambient light. If the ambient light is dim, the pupil will enlarge and the colorful iris will be reduced. A bright room will help showcase the iris in all its glory.

In post-processing, I increased clarity to help bring out details in the iris, increased the saturation a little and made relatively minor adjustments to brightness/contrast. The image shown was cropped moderately (from 5760 x 3840 to 4848 x 3232 pixels).