A Macro View of the Eye: A Walkthrough 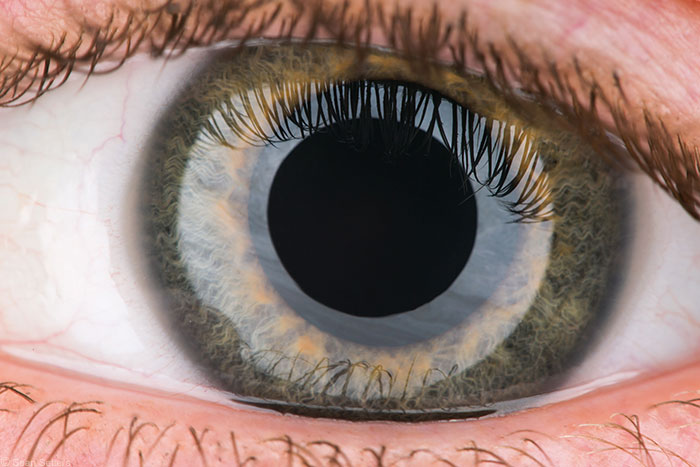 While attempting a few macro shots yesterday, I was inspired to turn my lens on a subject that has always fascinated me because of its intrinsic beauty and complexity – the eye.

As I wanted a macro shot of the eye, my lens choice was easy. However, as I wanted to get as much magnification as possible, I stacked all three of the Kenko Extension Tubes behind the lens. This shortened the minimum focus distance allowing me to get even closer to the subject for a larger than 1.0x maximum magnification.

How much larger? Well, let's see.

Update: I revised this section to make the calculation simpler.

Note that the magnification value assumes we are working at Minimum Focus Distance.

Working with this kind of magnification brings with it a couple of challenges. One challenge is that your depth of field becomes very thin. Even at f/10, there's only a sliver of the image that's in focus (the reflection of the top eyelashes). And on top of that, a higher than 1.0x magnification makes the viewfinder very dark. Minimal DOF combined with a dark viewfinder makes precise focusing a challenge to achieve.

And because of the very narrow effective aperture, a lot of light is needed for a proper exposure. In this case, I used a manually controlled, shoe-mounted Canon 580EX set to nearly full power (at ISO 320) in order to obtain a decent exposure. Of course, the RoundFlash Ringflash Adapter I was using resulted in a certain amount of light loss from diffusion, but I felt it was the best modifier for the look I was going for and well worth the penalty of a slightly higher ISO.

As far as the shutter speed goes, there was no specific reason I chose 1/80 second over anything else. In this particular instance, any reasonably fast shutter speed would work (even one that would likely show motion blur during at normal magnifications). That's because the light captured in this scene is provided entirely from the flash which has an extremely short duration. In effect, the shutter speed was the flash duration.

I typically use a tripod when shooting macro subjects. But in this case, using a tripod seemed a bit impractical. That's because with such a small DOF, I thought it would be easier for me to adjust the camera back and forth slightly to achieve focus rather than try and direct the subject to move her head the same amount. I also typically use 10x Live View to aid in manual focusing when shooting macro subjects. But in this case, using 10x (or 5x) Live View would have had two big consequences: the inability to see the entire framing and a loss of stability needed for precise manual focusing (as my eye would not be on the viewfinder).

I overcame focus challenges by sitting on the coffee table in front of the subject and bracing my elbows against my knees with the camera pressed firmly to my face. This gave me a relatively rigid platform where I could sway ever so slightly forward and backward as the subject stared straight into the lens. This also allowed me the ability to easily adjust framing on the fly for slightly different looks between shots. I concentrated on timing my shots when the reflection of her top eyelashes looked sharpest (a challenge with the dark viewfinder, but not impossible). After several attempts, I finally had the framing and focus that I wanted.

In post-processing, I increased clarity to help bring out details in the iris, upped the saturation a little and made relatively minor adjustments to brightness/contrast. The image is uncropped.

You can find a full resolution version on my Flickr photostream.