From Kenko Tokina, translated by Google: 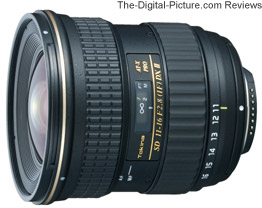 Placed in the front group P-molded glass aspherical lens that together with the group after the aspherical lens placed in MO, and distortion, aberration correction, ideally each.

Not only for Canon digital with a motor inside the lens for Nikon. AT-X 16-28 F2.8 PRO FX , 17-35 F4 AT-X PRO FX Tokina SD and GMR sensors mounted on its own-M (Silent Drive-Module), quiet and highly accurate combination of has realized the AF.