In 2010, Canon announced a special Studio Version of its EOS 7D which allowed for the embedding of barcode details in its images' EXIF information via a specially modified WFT-E5A Wireless File Transmitter.

Although no official announcement has been made, it seems Canon has developed a similarly modified EOS 7D Mark II and has provided an overview of its capabilities when paired with a WFT-E7A. Here are couple of screenshots from the video above: 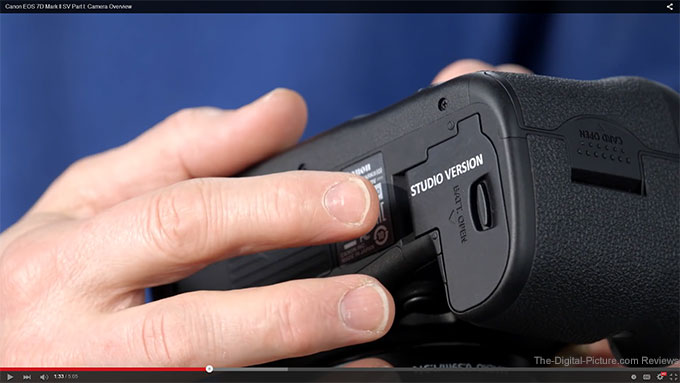 As you can see, the Studio Version of the 7D Mark II can be identified by a label on the battery door. Right now there is no indication whether or not previously-purchased WFT-E7s will have to be modified by a service center in order to enable compatability with the extra features available in the 7D II SV.

My guess is that Canon USA will release an official announcement about the specially modified EOS 7D Mark II in the not-so-distant future.

Join Canon USA Technical Advisor Mike Gurley as he gives an overview of the EOS 7D Mark II SV Studio Version with a barcode solution. He goes over key camera features and discusses how the camera can be used for different workflows in event photography. Mike also shows how to set up the camera to sync with a compatible barcode scanner.