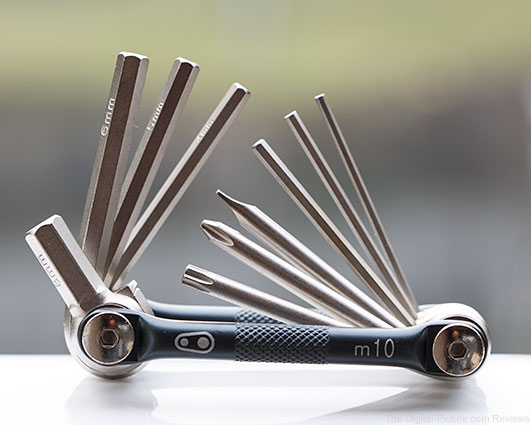 My use of Allen wrenches/hex keys probably increased 10-fold after taking up photography. Hex bolts are everywhere – tripods, quick release plates, ball heads, sliders – if your photography gear has a bolt, there's a good chance you're going to need a hex key to loosen or tighten it.

Until recently, my method of being prepared involved a small zip-top plastic bag kept inside my main camera bag's outer compartment which held every different hex key, bolt or miscellaneous part I thought I might ever need. And while the system worked, I often found myself without the hex key I needed when I needed it (having forgotten to replace it after use), or simply wasting time trying to sort through the assortment of tools to find the exact one I needed.

Then I came across a video by Mark Wallace entitled "Gear and Tips for Overseas Travel" where he mentions keeping a small bicycle multi tool in his gear bag to cover his photography tool needs. I thought it was a good idea, so I thought I'd pick up something similar.

The bicycle multi tool I chose was the Crank Brothers Multi Bicycle Tool (10-Function). It's a little larger than the one Mark carries, but it also includes a flat head screwdriver which I thought might come in handy at some point. So far, it's proved to be a very useful addition to my kit. If reduced size and weight are priorities, Mark's choice would be a better option overall.

Of course, hex key sets have been around for a long time; they aren't anything new. However, the addition of a few other tools – like the Phillips/flat head screwdrivers and Torx T-25 wrench – makes the bicycle multi tool a photographer's best friend.