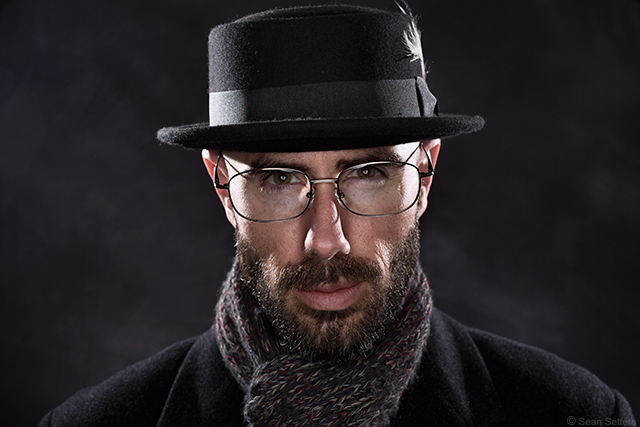 As is often the case, I created a self-portrait to gain more experience with a technique that I rarely employ – using a ring light as fill light.

A ring light is often used as a main light in high fashion, high key situations. The on-axis light is flattering because minimizes the look of flaws in skin. Using the ring light as a main light can get a bit stale after a while largely in part because of its conspicuousness. How often do you view the world with a bright light emanating from your eyeballs?

Using a ring light as a fill light is nothing new; it's an often used technique of David Hobby – the Strobist – and it was through his blog that I was first introduced to the concept. The ring light works particularly well as a fill light because, being on-axis with the lens, it doesn't leave a telltale shadow. Then again, the catchlights in a subject's eyes will always give away your fill light technique if he/she is looking at the camera (a circular catchlight is hard to miss). However, you can also remove the catchlight in post if desired.

I've used several different ring lights over the years, but my favorite is the RoundFlash Ring Flash Adapter. Why? Because it's compact when folded down, lightweight, and relatively easy to incorporate into a standard portrait session.

With the goal of practicing ring light use, I dusted off last year's Halloween costume (the hat and glasses, at least) to once again take on the role of Walter White, aka Heisenberg.

For this particular setup I used a tripod mounted Canon EOS 5D Mark III + Sigma 50mm f/1.4 DG HSM Art lens. A Canon Speedlite 580EX (forerunner to the 600EX-RT) flash was mounted in the camera's hot shoe and fitted with the RoundFlash Ring Flash adapter. As noted, this light was dialed down and acting like a fill light. Its light allows detail visibility in the shadow areas without leaving a discernable shadow of its own. The rim lights were provided by two more 580EX flashes set slightly behind me on both sides. The flashes were bare and zoomed in a bit (50mm, I think) in order to reduce their spill onto the background. And speaking of the background, I used a fourth 580EX flash to illuminate it – a Botero #023 Collapsible Background (Dark Grey) – from below. I lit the background just enough so that its mottled grey surface vaguely resembled smoke or fog behind me.

I used manual power settings for each of the flashes to reduce the number of variables involved and employed one of my favorite self-portrait tools – DSLR Controller + TP-LINK Portable WiFi Router – to frame the shot, focus and trigger the camera. The off-camera flashes were triggered via optical slaves (but yes, ETTL optical triggering would have worked just fine in this situation).

One thing I should note here – if a subject is wearing glasses, lighting can be a bit challenging. In this case, looking straight into the camera would have caused a very distracting glare in the glasses. To deal with the glare, I simply angled my head downward just enough so that the majority of the reflection did not appear in the lenses.

As you can see, the ring light did a good job of allowing me to keep the bulk of my face dimly illuminated without leaving a telltale shadow of its own. The shadow cast by the ring light would have been visible behind me (evidenced by a dark halo) if I hadn't used a background light to illuminate that area.

In short, the ring light is more than just a one-trick pony. Sure, it can be used as a bright key light for a high fashion look, but the ring light really shines (pun intended) in its ability to reveal details and control contrast when used as a fill light.

You can find a larger version of the image on my Flickr photostream.