How I Created Our Valentine's Day Image 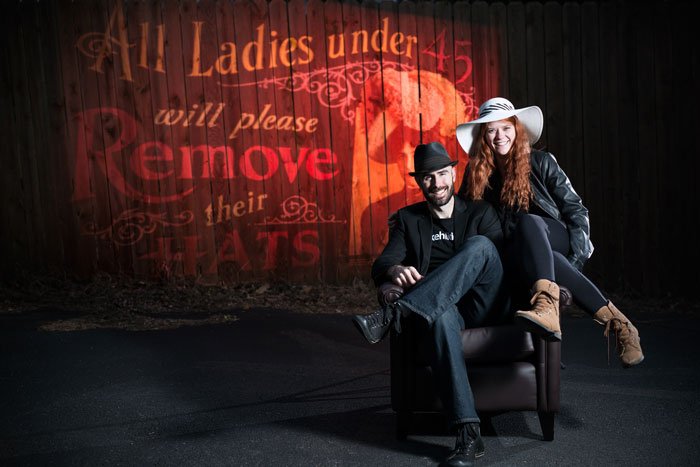 Amanda and I have been dating a little more than a year now. And even though I have a camera in my hand nearly every day, we have relatively few pictures of us together. This Valentine's Day, however, we decided to address that issue.

I've slowly been accumulating a collection of old, 35mm transparent slides for use with my Light Blaster. One recent eBay auction win left me with a set of humorous title slides designed for use with early films. Considering our fondness of hats, one slide in particular seemed well-suited for inclusion in our image.

We used my driveway (with a bordering fence) as the location for our shoot. The chair shown usually occupies a spot in my living room. I chose that specific chair because it was bulky enough to help me conceal the lower part of the light stand that the Light Blaster would be on.

The mainlight consisted of a 580EX Speedlite flash diffused by a 24" Glow Collapsible Softbox positioned just out of the frame to the right. The softbox was chosen because its directionality allowed me to keep light from contaminating the background projection. I used a Lumopro LP180 flash zoomed to 105mm for the rim light which was positioned behind us, camera right. I used another 580EX positioned directly behind the chair with the Light Blaster + Sigma 35mm f/1.4 DG HSM Art lens attached. This lens provided the perfect size projection while its wide f/1.4 aperture also allowed me to squeeze every bit of illumination out of my flash (wider aperture = brighter projection). I used radio triggers to trigger the flashes and a Canon RC-1 wireless remote to trigger the tripod-mounted 5D Mark III + Sigma 50mm f/1.4 DG HSM Art lens (f/2.8, 1/160 sec, ISO 320). We positioned ourselves very carefully to conceal the top half of the light stand and flash / Light Blaster.

After a couple of dozen attempts we had the shots we wanted. After a small amount of post processing, we arrived at the image shown above. Amanda was especially happy with the shot, so it was well worth the effort.