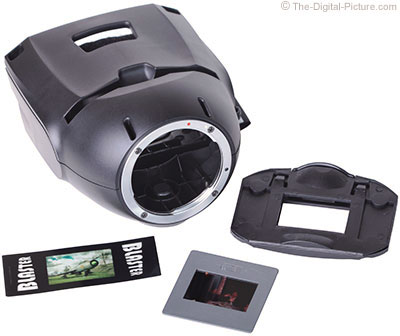 So why would I need to add yet another light modifier to my collection? Because this one is like no other light modifier I own. When paired with a shoe-mount flash and a camera lens, the Spiffy Gear Light Blaster allows you to project an image from a slide onto any surface. The Light Blaster works with their Creative Kit slides, 35mm slides, or your own custom made transparency slides.

The Light Blaster basically works like one of those old-fashioned carousel slide projectors (some of our youngest visitors will have no idea what these are – try Wikipedia). It uses a flash to project an image (printed on a transparent slide) through a lens onto any surface.

To visualize this, think about how a lens normally works. Light enters the front of the lens and is focused onto the camera's sensor on the other side. Well, the Light Blaster works in reverse – you shoot light through the transparent “sensor” (the slide) and the light is projected out the front of the lens. Keep this explanation in mind while reading the rest of the review as this will help you understand some of the issues you will encounter later.

The Light Blaster arrives with a slide holder, case, and a seemingly random 35mm slide (mine looked like it was taken at a holiday family dinner). The projector is made of plastic and has an EF mount – perfect for Canon shooters. A Nikon to Canon lens mount adapter is needed to utilize Nikon lenses with the Light Blaster. The projector has a metal, threaded 1/4"-20 tripod mount on the bottom and uses a hook and loop (more commonly known by the brand name Velcro®) speed strap for securing the flash in place.

Not surprising is that your Light Blaster lens choice matters. The type of lens you choose will play a significant role in how your image is projected. Variables that affect projection include whether the lens is EF or EF-S mount, maximum aperture and focal length.

While the Light Blaster is compatible with EF-S lenses, there is a big difference in how EF and EF-S lenses project an image. To understand why, think about the difference between EF and EF-S lenses. EF-S lenses project a smaller image circle than EF lenses because their image circle is designed to cover a smaller (1.6x) crop sensor (which is one reason why they’re also generally less expensive). In reverse, that means only the center part of your slide gets projected. If you have a slide with only a small graphic in the center, then an EF-S lens will work fine. However, if you want the entire 35mm usable area to be projected, stick to EF lenses. 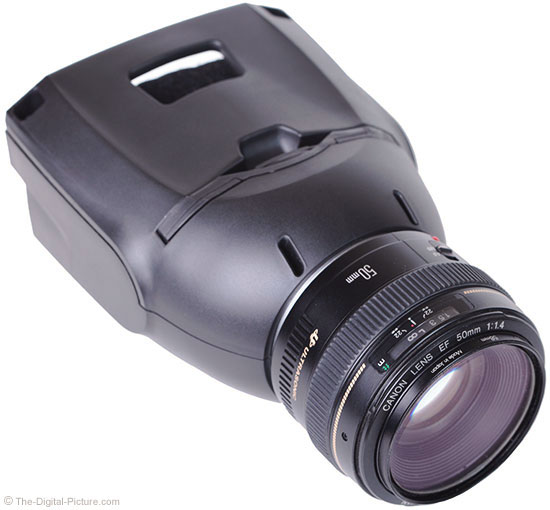 As I also discovered while testing the Light Blaster, the flash you use may affect your projection. With an adjustable hook and loop strap to hold the flash in place, the Light Blaster is designed to be compatible with a wide range of flashes. I wanted to use Blaster with Canon 580EX Speedlites, but I wasn’t getting good, even light coverage. Because the strap pulls the flash head toward the bottom of the Blaster, the middle of the flash head wasn’t not properly centered with the slide. The decentered flash resulted in the top part of the slide (as seen when looking through the device or the bottom part of the slide when looking at the projection) being dark.

A small piece of foam glued to the inside/bottom of the Light Blaster, in pure do-it-yourself fashion, properly centered the flash. An added benefit from the foam was the additional friction between the flash head and the device for added security. 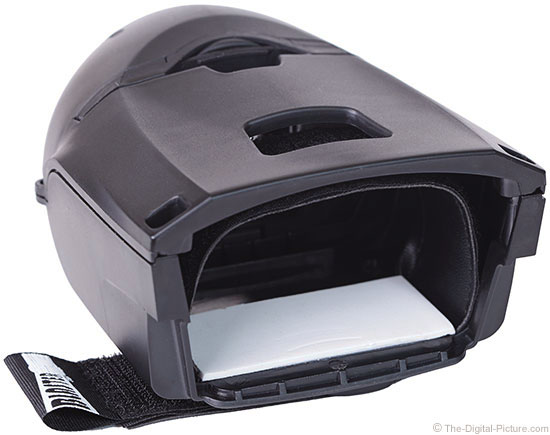 Even though my DIY fix was quite easy to implement, the Light Blaster design should have taken flash centering during tensioning into consideration.

Crank up your flash zoom setting. You will probably want to set your flash to its maximum/highest focal length coverage for optimal results. As the slide is much smaller than your flash’s head, it makes sense to focus your flash’s output in a smaller area. It may seem counter-intuitive, but you’ll actually get more even results zoomed to 105mm than you will at 24mm.

The Light Blaster ships with a seemingly well-made protective case. Even though the case isn’t necessarily padded, its sides are very rigid. The Light Blaster fits snugly inside and there is a pocket in the flap that can be used to hold slides. It is one of the better cases I have seen for a light modifier. 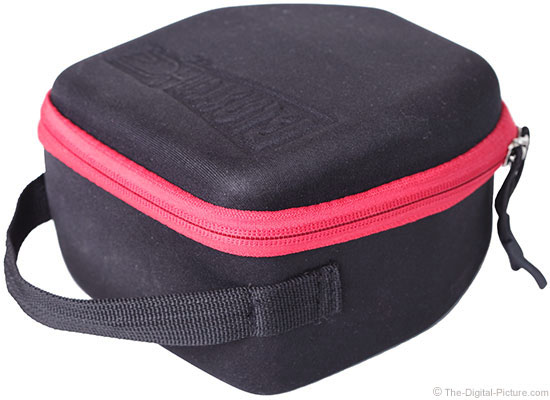 To use the Light Blaster, put the flash into the projector and tighten the hook and loop strap. Be sure to push the flash head all the way in until it stops. You’ll probably need to tilt your flash head upwards a few degrees in order for it to completely fit inside the device.

Next, affix the Light Blaster to a support mechanism (such as an umbrella swivel perched on a light stand) using the 1/4"-20 tripod mount socket. The Manfrotto Swivel Umbrella Adapter works well for this.

Now, you’re ready to attach your lens. When attaching your lens to the device, you won’t hear a reassuring “click” like you would if you were mounting the lens to a camera. Instead, the lens will simply stop rotating. I’m not a fan of the lack of feedback, but I’ve used the Light Blaster with at least five different lenses and never had any issues with the mount. When you think it’s secure, it probably is.

The next task is to mount the slide into the slide holder and insert the holder into the Light Blaster. Keep in mind that an image gets flipped (both horizontally and vertically) when it’s projected. Practice will help you figure out how to orient the slide in the holder to get the results you’re looking for.

Sorry, the Light Blaster does not have autofocus. You can use your lens’s focus distance window (if it has one) for a rough guide. It usually takes about 4-5 shots to dial in the focus so that the projected image is sharp on the background. If you want to avoid the trial-and-error focusing, you can put the same lens you’re using on your Light Blaster on your camera and focus the lens from a position just above where it would be mounted. Once pre-focused, you can switch it to manual focus, remove the lens from the camera (being careful not to touch the focus ring), and affix it to the Light Blaster.

Now that everything’s set up, you simply need to dial in your flash’s power until your slide is projected at the brightness you need. Remember, larger aperture lenses will allow you to project brighter images. A Canon EF 24mm f/1.4 L II USM Lens makes an ideal projector for background scenes because of its wide focal length and large maximum aperture.

For the shot below, I used a Canon EF 50mm f/1.4 USM Lens mounted to the Light Blaster using one of the slides in their “Creative Effects” kit. I used a Westcott 26” Rapid Box Octa for the main light, a Wescott 43” White Collapsible Umbrella for fill and a HonlPhoto 1/4" Honeycomb Speed Grid for the rim light with manually controlled Canon 580EX flashes. 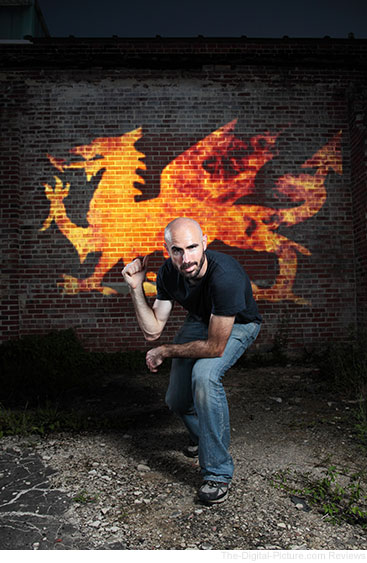 For the next shot, I bounced the Westcott 26” Rapid Box Octa off the ceiling in front of me to create the main light. I used two gridded flashes for the right and left rim lights. I placed the Light Blaster just above the camera and used the EF 50mm f/1.4 for the projection. 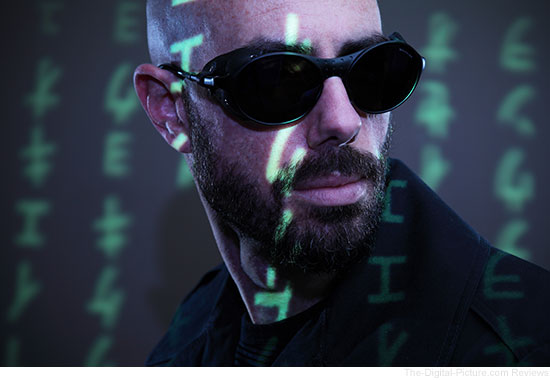 How do you create a custom slide? That’s a very good question and little direction is provided for doing this. Light Blaster provides a custom slide template on their website, but other than that, does not offer much guidance on how to create a good slide.

Through trial and error, I found that by using Grafix Ink Jet-Printable Transparency Film with my Canon PIXMA PRO-9000 Mark II printer, I could get decent results using the Photo Paper Plus II media profile. The printed blacks don’t completely block the flash. If the light from your Light Blaster is the only light hitting the background, you can still capture some detail in the non-graphic areas. You can see how much light is bleeding through the black area of my custom printed slide in the shot above – just look at the difference between my shadow and the rest of the background.

If you need your blacks to completely block your flash’s output, then you will likely need to order custom-made slides from a service like ColorSlide.com. Note: I have never used ColorSlide.com, but I plan to try them out when I need higher quality custom slides than what I can create on my own.

After using the Light Blaster for a couple of weeks, I really began to appreciate its value for inspiring my creativity. I’ve even started buying film slides on eBay so that I have a steady supply of new and exciting backgrounds. Of course, Spiffy Gear's own Creative Kits are a great source for backgrounds.

It’s a very fun tool to have in my camera bag and well worth the moderate investment to be able to differentiate my portrait services from the competition. The Light Blaster has earned a permanent place in my light modifier collection and I anticipate using it regularly.