Wednesday, July 10, 2019
The NEW Zoom F6 | A Powerful, Professional Tool for All Your Pro-Audio Recording Needs

As a photographer, you've probably run into a situation where your camera's sensor couldn't capture the full range of brightness levels in a scene, necessitating techniques – such as bracketing – to obtain a higher dynamic range image. Well, those recording audio often face a similar issue capturing the full range of sounds available without clipping and/or distortion.

However, the new Zoom F6 uilizes 32-bit floating recording and dual analog to digital converters (one tuned to capture loud sounds, one tuned to capture low sounds) which the unit combines to create a full range of clean audio. The processing is so good, in fact, that it's almost impossible to clip audio when the device is set to 32-bit recording (the limiter isn't even available at this setting).

With a built-in Ambisonic mic, recorder and decoder, the Zoom H3-VR is the complete solution for capturing & processing spatial audio for VR, AR and mixed-reality content. 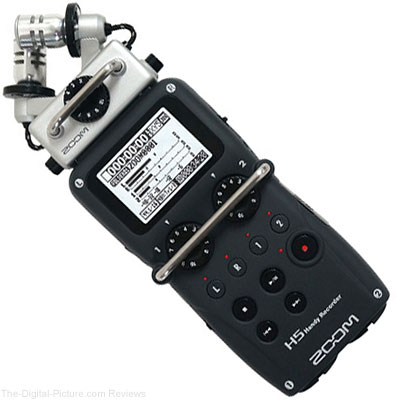 B&H has the Zoom H5 Handy Recorder available for preorder. 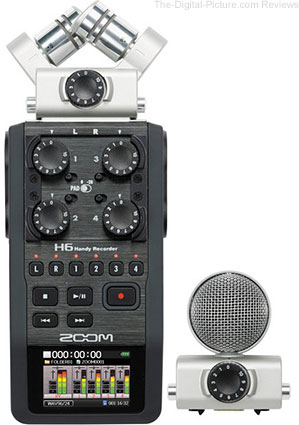 The H6 is the most advanced portable recorder ever introduced. It offers six tracks of simultaneous recording and employs an innovative system of interchangeable input capsules that can be swapped out as easily as the lenses of a camera. Four capsules are available: stereo X/Y and MS (Mid-Side), both included with the H6, and Shotgun and dual XLR/TRS combo capsules, available as options.

The H6 can be attached to a camera strap or mounted directly to a DSLR or camcorder, and its large full-color display makes it easy to view recording and playback levels even in low-light environments. It records directly to SD, SDHC and SDXC cards up to 128 gigabytes in a variety of MP3 and BWF-compliant WAV file formats, including 24-bit / 96k for the ultimate in high-definition audio. Four XLR/TRS combo jacks enable the connection of external microphones or line-level devices. Each input has its own dedicated gain control and pad switch, as well as phantom power in three different voltages.

Other features include a stereo Line Out for connection to camcorders; a headphone jack and built-in speaker; onboard effects, metronome and chromatic tuner; adjustable playback speed and pitch correction; and Pre-record, Auto-record and Backup-record functions. A USB port enables data transfer to and from audio editing software and allows the H6 to serve as a multichannel audio interface for computers and tablets.

"The H6 will provide users with a totally new level of performance and possibilities," said Scott Hagen, Vice President of Sales and Strategic Planning for Zoom North America. "We believe it's poised to become a legacy recorder that will stand the test of time."

The Zoom H6 will be available in stores July 2013.

B&H has the Zoom H6 Handy Recorder available for preorder.