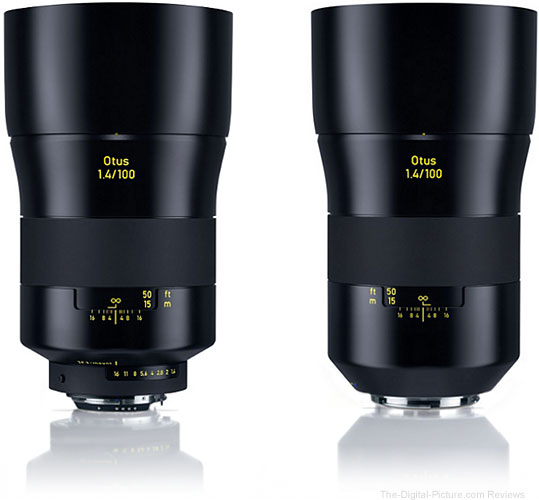 With its new Otus 1.4/100, ZEISS has expanded the tried and tested Otus family to include a new telephoto focal length. The ZEISS Otus 1.4/100 is one of the best lenses in its class due to its low sample variation, outstanding imaging performance, and superior build quality.

With the same uncompromising performance that makes all Otus lenses stand out, the ZEISS Otus 1.4/100 is a truly exceptional lens. A lens that is a reflection of the comprehensive expertise and extensive experience of ZEISS.

Although developed for 35 mm full-frame cameras, the Otus 1.4/100 gives you the quality and look of a medium-format system.

Whether in the studio or on location, this lens stands out in every situation thanks to its high resolution and excellent sharpness – even at the maximum aperture of f/1.4.

Whether portrait or product photography, the bokeh will impress you. The apochromatic lens design with aspherical lenses and special glass prevents almost all conceivable aberrations. In addition, the high-quality coating keeps the contrast high, even when shooting against the light, and minimizes lens flare.

Apochromat
Because this lens is an apochromat, chromatic aberrations (axial chromatic aberations) are corrected with elements of special glass with anomalous partial dispersion. The chromatic aberrations are therefore significantly below the defined limits. Bright-dark transitions in the image, and especially highlights, are reproduced almost completely free of color artifacts.

The ultimate in image contrast
Aberrations caused by extreme differences between shadows and highlights are particularly obvious in images captured at night. Thanks to the outstanding correction of lateral chromatic aberration, the floodlit facade is reproduced with absolute perfection.

No colour fringing
Sources of light located in front of or behind the plane of focus present particular challenges to every lens. In the case of the ZEISS Otus, longitudinal chromatic aberration is so low that practically no colour fringing occurs.

The medium format look
Thanks to its exceptional sharpness, the ZEISS Otus exploits the full potentials of contemporary high-resolution sensors and rewards photographers with images characterised by breathtaking rendition of even the finest details.

Aspherical design
The aspherical lens design ensures consistent imaging performance throughout the entire focusing range as well as sharpness to the periphery of the image. The asphere's more complex surface profile can reduce or eliminate spherical aberration and also reduce other optical aberrations compared to a simple lens.

The lens is expected to be available for preorder at B&H and Adorama.

With its 13 high-speed, full-frame, prime lenses for high-quality film productions, ZEISS is focusing on maximum quality, low weight, and significant versatility when it comes to creating superb visual imagery.

OBERKOCHEN/Germany, 2018-05-24 – ZEISS has introduced a new family of high-speed lenses for high-end film production: The ZEISS Supreme Prime family consists of 13 lenses with fixed focal lengths between 15 and 200 millimeters, the majority with a maximum aperture of T1.5. “The lenses are designed for film productions of an extremely high quality,” says Christophe Casenave from ZEISS. “They are perfect for high-budget advertising or feature films, for example.” ZEISS Supreme Primes are designed to cover cinematic large format camera sensors and are compatible with all of the latest camera models, such as the Sony Venice, ARRI Alexa LF, and RED Monstro. According to Casenave, the versatility of the Supreme Prime lenses to create different visual looks is due to the gentle sharpness, the aesthetic focus fall-off and elegant bokeh. The lenses are extremely flexible and can be used equally well for science fiction thrillers as well as for dramas.

"Weighing an average of 1600 grams (3.5 pounds), ZEISS Supreme Primes are significantly lighter and smaller than comparable lenses on the market,” says Casenave. With these compact and lightweight lenses, ZEISS is responding to many camera operators’ desire for compact equipment that stills meets the highest standards of quality. “ZEISS Supreme Primes are unbelievably rugged and reliable. Regardless of whether filming in the desert or in the Arctic, the lenses perform flawlessly. And in the event that something should ever break, our worldwide service network provides fast and professional help.”

The ZEISS Supreme Primes are equipped with the ZEISS eXtended Data metadata technology. Introduced in 2017, ZEISS eXtended Data provides frame by frame data on lens vignetting and distortion in addition to the standard lens metadata provided using Cooke's /i technology1 protocol. This greatly speeds up the entire film production’s workflow. When using visual effects for example, with only a few clicks, the lens properties can be removed so that computer-generated effects imagery can be accurately applied to the captured imagery. The lens properties can then be reapplied with the same click of a button and combined with the film material to create a realistic image. Previously, all of the data had to be measured manually so that it could be corrected in post-production. But ZEISS eXtended Data eliminates this time-consuming job. 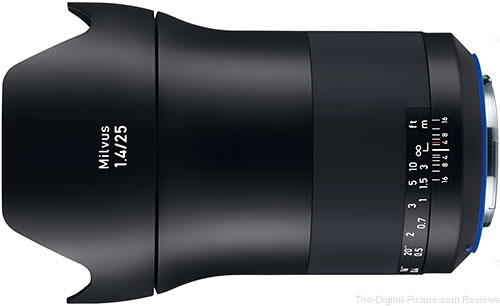 With its new wide-angle focal length, the ZEISS Milvus family now boasts eleven lenses for single-lens reflex cameras, including four focal lengths with a maximum aperture of 1.4, which are perfect for videographers too.

OBERKOCHEN/Germany, 2017-10-18 – The ZEISS Milvus 1.4/25 is the latest focal length to be added to ZEISS’s largest range of lenses for full-frame single-lens reflex cameras. The lens, which was developed for the DSLR systems from Canon1 is a trademark or registered trademark of Canon Inc. and/or other members of the Canon Group. and Nikon2 is a registered trademark of Nikon Corporation., is suitable primarily for landscape and architecture photography, and for journalistic shots and videos. “The completely new optical design ensures superior performance across the entire image field,” says Christophe Casenave, Product Manager at ZEISS. “This results in high-contrast photos and a harmonious bokeh.”

Thanks to a maximum aperture of 1.4, this lens can even capture exceptional images in poor light. “Even at full aperture, there are hardly any color fringes,” says Casenave. “The finest details can be reproduced in high definition and contrast all the way into the corners.” The metal housing is what makes the lens robust, and its dirt and dust protection even makes the ZEISS Milvus 1.4/25 ready for action in adverse weather. The large 172-degree focus rotation angle enables precise manual focusing for adding creative touches to photos and videos.

The largest ZEISS lens family yet

Featuring eleven focal lengths ranging from 15 to 135 millimeters, including two macros, the ZEISS Milvus family covers a host of applications, such as portrait, landscape, architecture and street photography. “We can offer every photographer just the right lens,” says Casenave.

Perfect for videographers too

The four ZEISS Milvus focal lengths 25, 35, 50 and 85 millimeters with an aperture of 1.4 are just perfect for filming. Thanks to their high speed, they are suitable primarily for interviews and documentaries where the videographer can utilize natural light. Thanks to the de-click function in the version for the Nikon-Mount the aperture can be adjusted continuously. ZEISS Lens Gears in a range of sizes permit the use of follow-focus systems.

B&H has the Zeiss Milvus 25mm f/1.4 available for preorder.

OBERKOCHEN/Germany, 24/04/2017 - No matter if it is Star Wars, Harry Potter or Avatar: these days, just about every film features special effects. For many small film productions, having visual effects in their movie would be a dream come true. Unfortunately, making the image fit the look of the footage has required expensive tools – until now. At the NAB Show in Las Vegas, ZEISS presented new metadata technology that makes this possible: the company has equipped its new ZEISS CP.3 XD compact lens family with ZEISS eXtended Data.

What exactly is this? "ZEISS eXtended Data is the first metadata technology which stores the lens distortion and shading – for every single frame," explains Christophe Casenave, Product Manager at ZEISS. "Moreover, all /i-Technology metadata are recorded, including the focus distance, aperture value and depth of field, which is supported by most cameras." This makes the technology ideal for working with visual effects: by using the metadata, it just takes a few clicks to modify the image generated on the computer to fit the lens characteristics, and to then splice it together with the footage to create a realistic image. Distortion and shading can be corrected or even amplified in post-production.

"It used to be that only big blockbusters could take this approach," says Casenave. "Cine lenses that provide metadata are relatively expensive and, up until now, distortion and shading had to be manually measured – a time-consuming and expensive process." However, since ZEISS has incorporated the technology into its compact CP.3 XD cine lens family, low-budget productions can now take the same approach to creating their own special effects. "With ZEISS eXtended Data, we are offering Hollywood technology for everyone, providing small film teams with new creative opportunities."

An end-to-end solution: cooperation with Ambient and Pomfort

With the ZEISS CP.3 XD, ZEISS not only offers the lenses with metadata, but has also given thought to storage and processing. It has teamed up with partners in the industry: the company Ambient has developed the MasterLockit Plus system together with ZEISS. It records all metadata along with a time code in case the technology is not supported by the camera. "This way truly everyone can work with ZEISS eXtended Data, no matter what equipment they use," says Casenave. Thanks to the cooperation with the software developer Pomfort, distortion and shading can be modified on the set in real-time using the Pomfort tool LiveGrade Pro. The film crew already gets a sense of what the final look will be during the shoot. The film clips and lens data can be consolidated and organized with Silverstack, Pomfort's file manager.

ZEISS plans to further expand the new metadata technology in the future. "Our customers will then be able to upgrade to the new version, making the CP.3 XD a long-term investment," says Casenave.

In addition to the metadata, filmmakers have even more reasons to get excited about the new lens family: the ten prime lenses between 15 and 135 millimeters cover full-frame. As is typical for ZEISS, the image has a clean, crisp look, and ZEISS says the image quality is excellent. "These lenses deliver outstanding results, even in light situations with a large dynamic range, i.e. highlights and shadows within the same scene," says Casenave. The maximum speed of the seven focal lengths between 25 and 135 millimeters is T2.1, the 15, 18 and 21 millimeter lenses have a speed of T2.9. With a front diameter of 95 millimeters, the lenses are light-weight and compact. They are particularly well-suited for hand-held filming or shooting with gimbals, Steadicam or drones. ZEISS has also improved focusing: the manual focus is now noticeably smoother. According to ZEISS, it is comparable with the ZEISS Master Primes and can also be operated with a small motor. The focus rotation angle is 300°. The lenses are equipped with an interchangeable mount so that they can be used on almost any camera. In addition to the ZEISS CP.3 XD, there is also a version available without metadata: the ZEISS CP.3.

Initially, a limited number of ZEISS CP.3 XD and CP.3 lenses will be available at dealers.

Long focal length, fast autofocus, optical image stabilization, lightweight. Thanks to the outstanding correction of all chromatic aberrations, the ZEISS Batis 2.8/135 is a high-performance telephoto lens with an Apo Sonnar design. The lens is the optimum solution for medium-distance portrait photography.