Canon has released its financial results for 1Q 2019. You can download the results, presentation material and speech summary here.

It seems that the camera market decline is occuring at a higher rate than Canon initially projected. 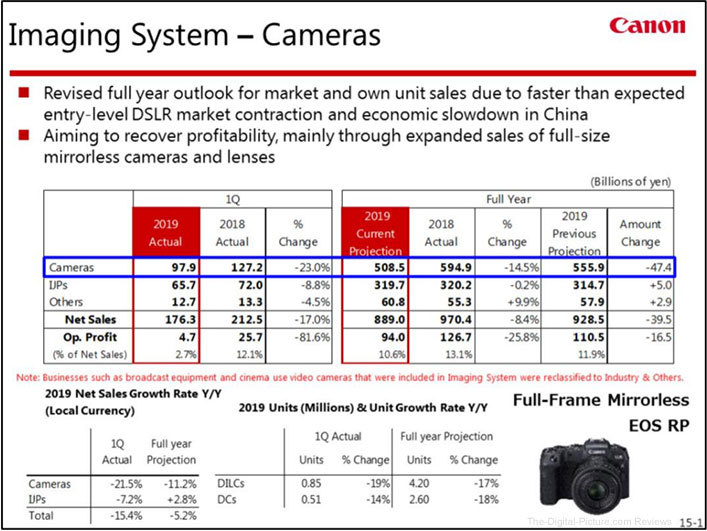 Here's what Canon had to say about the numbers:

The habit of capturing images with smartphones with improved cameras has become a part of daily lives of consumers. As a result, the market for entry-level DSLRs is contracting at a pace that exceeds the outlook we had at the beginning of the year. That said, we expect the user base of professionals and advanced-amateur, people who value the image quality and expressive possibilities afforded by cameras with large sensors and an abundance of interchangeable-lenses to remain. For the market overall, however, we expect the trend of market contraction to continue for some time.

Mirrorless cameras, known for being small and lightweight, are increasing their presence in the market. Amid this situation, we will steadily shift our focus from DSLR to mirrorless cameras with the aim of maintaining our overwhelming competitiveness, which we have built upon DSLRs.

In the first quarter as well, we grew our unit sales of mirrorless cameras at a pace far exceeding the overall market, thanks to such new products as the EOS M50 and EOS R. Additionally, at the end of the quarter, we further enhanced our lineup, with the launch of the EOS RP, a smaller and lighter mirrorless camera equipped with a full-frame sensor and the same new mount found on the EOS R. Additionally, we plan to release six new models of RF lenses within the year. Users have not only praised the performance of these bodies and lenses, but also expressed their high expectations for the R system overall having felt our sense of urgency in strengthening our lineup over a short period of time. We will work to maintain sales growth of the EOS RP, which got off to a flying start, while also successively launching new RF lenses as we work to further stimulate sales of our strengthened mirrorless lineup.

From a profit perspective, in the full-frame sensor category where particularly high growth continues, even among mirrorless models, we will work to improve our product mix, actively expanding sales of both R System products. Additionally, for lenses with high profitability, we will not only promote sales of RF lenses, but also continue to promote the appeal of our broad range of EF lenses. Furthermore, we will work to expand automation initiatives not only to other products, but also other processes, raising our cost competitiveness and linking this to a recovery in profitability. At the very least, it appears that we have six new RF lenses to look forward to before the close of 2019.

Canon has released its financial results for Q1 of 2018.

In the Imaging System – Cameras section of the presentation material, Canon notes:

On the same page Canon displays a picture of the EOS M50 with the label "New Mirrorless Model - M50." It will be interesting to see what Canon has up its sleeve in regards to mirrorless cameras which may further impact its market share in 2018. 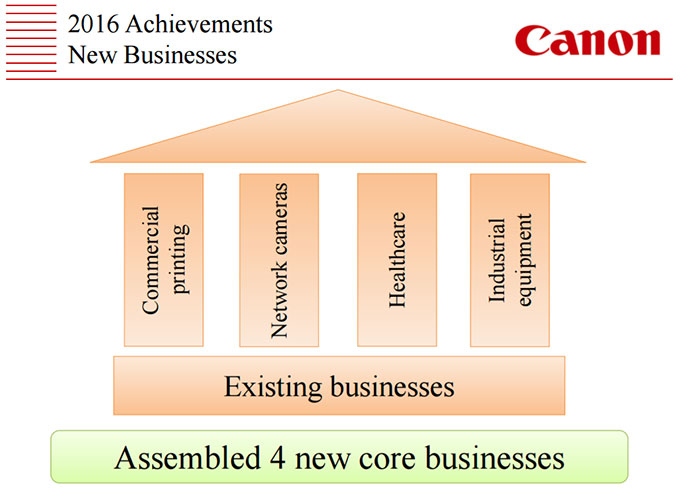 With Nikon restructuring and slashing jobs, you may be interested to know how Canon plans to grow the various segments of its overall business in the coming years.

With that in mind, they've just published a slideshow presentaton from their Corporate Strategy Conference 2017. Here's the link: