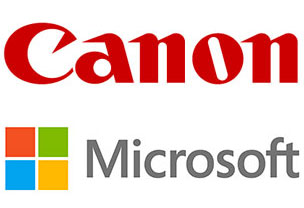 Microsoft said the deal covers patents for digital imaging and mobile consumer products, among other things.

Canon is the latest company to ink a patent licensing deal with Microsoft.

The deal provides Microsoft and Canon with access to licenses for each other’s patent portfolios. Exact terms were not disclosed, but Microsoft said the agreement covers a broad range of products and services each company offers, including certain digital imaging and mobile consumer products.

“This collaborative approach with Canon allows us to deliver inventive technologies that benefit consumers around the world,” Nick Psyhogeos, general manager and associate general counsel of the IP Licensing of the Innovation and Intellectual Property Group at Microsoft, said in a statement. “Microsoft believes cooperative licensing is an effective way to accelerate innovation while reducing patent disputes.”

The two companies have worked together before. In 2009, Microsoft said that Canon was among the first firms to sign up for a licensing program for its Extended File Allocation Table (exFAT) technology.

Microsoft said it has now inked more than 1,100 patent licensing deals since its IP licensing program started in Dec. 2003. Many of the headlines surrounding that program have focused on Microsoft’s efforts to license its Android-related patents (Yes, Android).