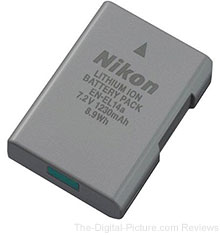 "Modifications enabled with this firmware upgrade

If so, I suspect they may have been taking a play out of Canon's playbook. Back in early Ocotber, Canon released a product advisory regarding the LC-E6 Battery Charger, the charger that ships with cameras using the LP-E6 battery (5D Mark III, 5D Mark II, 6D, 7D, 70D, 60D, 60Da). In the product advisory, Canon stated:

This symptom may occur when a Canon Battery Pack LP-E6 has been discharged due to being unused for a prolonged period of time, such as when it is first purchased."

That got me wondering – Did Canon reengineer their battery chargers to make them less compatible with 3rd party batteries? And did their reengineering attempt inadvertently cause issues with their own OEM batteries? If so, is Nikon following Canon's lead in actively discouraging 3rd party battery use?