Having had a good experience with BigValueInc when purchasing a 5D Mark III on a previous occasion, I decided to purchase another popular item from the discount eBay retailer – a Canon EF 24-105mm f/4L IS USM Lens. BigValueInc runs sales on this particular lens quite often (at considerable savings), and I wanted to see what one could expect from a purchase of one of their EF 24-105s.

The lens was purchased on December 2 via a deal we posted the previous day. I received a shipping notice later that evening.

As with my previous purchase, BigValueInc shipped the item via UPS instead of FedEx (even though FedEx was clearly stated in the auction). And, just as last time, this unannounced change in shippers didn't matter to me. However, some people may prefer one shipper over the other and dislike the unexpected change, so it's something to be aware of.

The package I received arrived in a plain box in good condition. Inside the outer box was a white box that contained the 24-105mm lens with caps, lens hood, and and soft lens pouch (you can see the lens pouch stuffed inside the styrofoam used to secure the lens). Note: This lens came with one of Canon's new center-pinch lens caps. Nice! But, no actual warranty card was included. 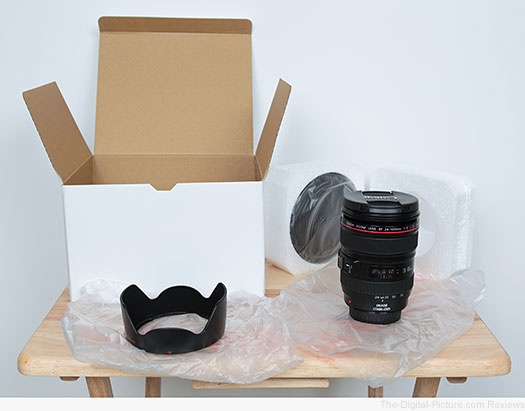 As expected, the packaging looks like BigValueInc simply took the lens right out of a 5D III kit. My hunch is that we received a lens that was originally packaged with one of the 5D III's sold for $2,445.00 on Black Friday. That would explain the white box and lack of dedicated warranty card (as the warranty card likely went with the camera).

My initial evaluation of the lens has been good. It works just as I would expect it to. I was also able to register the lens with Canon USA.

In conclusion, I had another relatively good experience with BigValueInc. I've never had to deal with BigValueInc in regards to returning an item, but I fear things may not go as smoothly with a return compared to more estabilished retailers such as Adorama, Amazon & BuyDig.com. Based on my experiences, though, I wouldn't be afraid to pull the trigger on an exceptional deal.

That said, with Adorama's significant deals as of late, BigValueInc's low-price advantage is becoming a little less relevant when it comes to choosing a retailer for lens purchases.