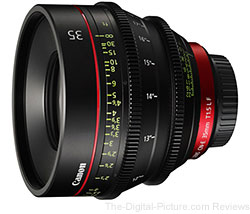 "As with all Canon Cinema prime lenses, the new Canon CN-E35mm T1.5 L F lens has been crafted to meet the creative requirements of the most discerning cinematographers, directors and producers," said Yuichi Ishizuka, executive vice president and general manager, Imaging Technologies & Communications Group, Canon U.S.A. "Filmmakers indicated a need for this lens in our lineup and with its launch, we now offer six cinema prime lenses covering some of the most important focal lengths."

Canon EF Mount Advantages
All Canon Cinema prime lenses feature a genuine Canon EF-mount with electronic contacts that interface with corresponding contacts on Canon cameras for direct communication between each device. This communication allows lens data - including F-numbers - to be displayed in the viewfinder. Both the F-number and the lens model name are also recorded in the camera's video file as metadata. The new upcoming firmware announced today for the Canon Cinema EOS C500, EOS C300 and EOS C100 cameras will provide Canon proprietary features, such as the Peripheral Illumination Correction function, for the CN-E14mm, 24mm, 50mm, 85mm and 135mm lenses and is scheduled to be available by the end of 2013. Such features are scheduled to be available for the new CN-E35mm lens in 2014.

Canon Cinema Zoom Lenses
The versatility of image-capture options using Canon EOS Cinema Cameras can be further extended with Canon's Cinema Zoom lenses (the CN-E14.5-60mm T2.6 wide-angle and the CN-E30-300mm T2.95-3.7 telephoto) and compact Cinema Zoom lenses (the CN-E15.5-47mm T2.8 wide-angle and CN-E30-105mm T2.8 telephoto). All four lenses are available in both EF- and PL-mount versions; the mount can be switched at a Canon service facility in the United States for added flexibility. Almost all of Canon's EF Series photographic lenses can also be used with Canon Cinema EOS Cameras, including Image Stabilized zoom, tilt-shift and macro lenses.

Pricing and Availability
The Canon CN-E35mm T1.5 L F Cinema prime lens is expected to be available in December 2013 for an estimated retail price of $5,200. For a visual representation of the power of Canon's Cinema optics, please visit: pro.usa.canon.com/cineoptics.