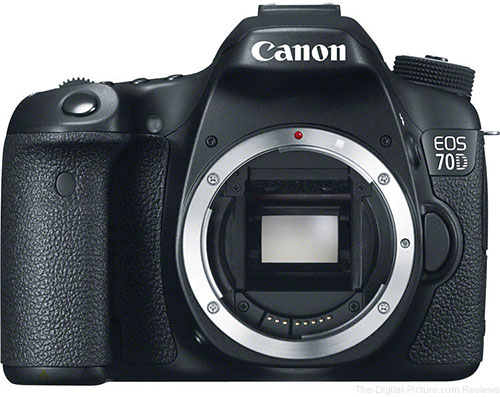 Canon EOS 70D results have been added to the site's Image Quality tool. These results show the resolution of the 70D's sensor along with the base level of sharpness Canon has dialed in.

The IQ tool link above will load a comparison to the Canon EOS 60D. The 70D is looking very nice against the 60D with just-the-right amount of improved sharpness. Increasing sharpness *can* increase noise levels. I'll have that comparison available for you soon.

The other 70D comparison I find interesting is against the Canon EOS Rebel T4i / 650D. I find the T4i images to be slightly oversharpened even with a very low sharpness setting of "1". Look for the halos and jagged edges around the black details in the T4i's ISO 12233 chart test results. The 70D results, again, look just right. And, there is a noticeable resolution increase in subjects with fine details.

Add the 70D to Your MP3 Playlist

With a fast SDHC card, I am getting 20 frame bursts from the 70D. This camera rocks, so ... rock to the sound of this camera using the following MP3 files. All sounds clips illustrate the max burst rate and buffer depth of the respective cameras:

The Canon EOS 70D is now in stock: Adorama | Amazon