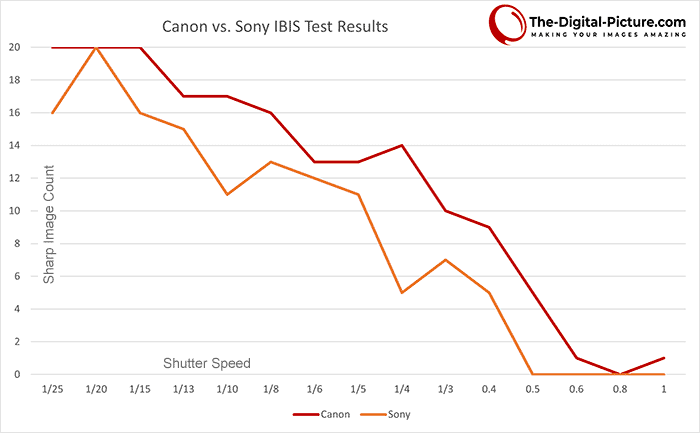 Ironically, the day after sharing the first Canon vs. Sony IBIS Comparison Test, Sony released Alpha 1 firmware update version 1.10. While IBIS was not called out in the list of updated features, discussions hinted that an IBIS performance update was possibly included in the "Other improvements in operational stability" line item. Sony would not divulge the answer to that question. That possibility left a little doubt in my mind, and ... I don't like doubt more than I don't like testing image stabilization.

Round 2. The procedures for the second comparison test were the same as for the first, and the text for this test will remain mostly identical to that of the initial test.

When shooting handheld, image stabilization performance can be a significant image quality factor. Sony has incorporated In-Body Image Stabilization (IBIS) in their cameras for many years — the a7 II and a7R II had this feature. Canon's first IBIS implementations arrived last summer in the Canon EOS R5 and EOS R6.

Especially given Sony's long head start with this technology, I wanted to know: Is Sony's IBIS better than Canon's? Or is Canon's IBIS better? It was also possible that the two systems would perform equally, and that piece of information would also be helpful to know. It was time to create a comparison featuring the latest high-end models from each company, the Canon EOS R5 vs. Sony Alpha 1.

While I had opinions on the overall image stabilization performance of various Canon and Sony camera and lens combinations, explicitly testing the difference between the Canon and Sony camera IBIS had been interesting me. With identical Canon and Sony non-stabilized lenses in the lab at the same time, this comparison hit the top of my to-do list, becoming the priority.

This IBIS testing was performed in the studio, with ideal handheld testing conditions, including solid (concrete) footing and no wind. During testing, elbows were not resting on the body, and the viewfinder was in use (vs. the rear LCD).

The Canon EOS R5 with an RF 50mm F1.2 L USM Lens was tested against a Sony Alpha 1 with an FE 50mm f/1.2 GM Lens. The cameras were set to single-shot mode, with the electronic first curtain shutter selected in Tv mode. A detailed test target (exceeding camera resolution) was positioned at eye level about 10' (3.3m) away, with the distance marked for consistency.

Starting at 1/25 second exposures (roughly 2 stops of stabilization assistance expected for me), 10 images were captured with each camera. The shutter duration on both cameras was then increased by 1/3 stop, and the testing was repeated, alternating cameras until 1-second exposures were on the cards. That procedure amounted to 150 pictures taken with each camera (10 shots x 15 shutter speeds), 300 pictures total.

The measure of sharpness is not boolean, true or false, meaning an arbitrary determination of pass or fail was required, and adding an intermediary grade seemed a good idea. In addition, everyone loves a score, a firm number that can quickly be compared and quoted.

If the image was unsalvageable, it went into the "Delete" category. If an image is blurry, it was a waste of time to capture, load, and process. Worse is that I may have counted on the image being sharp, meaning that the desired image was lost. The blurry image also consumed space on the memory card and later on the computer's SSD. Thus, in the "Score" column, five points are deducted for each image falling in this category.

If the image was salvageable via increasing the sharpness or down-sizing the image, it went into the "Useable" category. No points were given for these images. While they will often get the job done, these results were mediocre.

Crisply sharp images are what we want. Test images making the "Sharp" grade were awarded 5 points.

Most images were not hard to place in one of these three categories. The "benefit of the doubt" rule was implemented for those hard to grade, and the higher grade was given.

Here is the resulting Canon vs. Sony IBIS comparison table:

The testing was so much fun that I decided to do it again. OK, the fun part was missing, but meaningful test results should be repeatable, right? While I made a significant effort to capture every test shot to the best of my current abilities, I had enough doubt in my mind to leave me unsatisfied. Testing for consistency seemed necessary.

Thus, after thoroughly evaluating the first set of results, the same test was repeated — another 300 images were captured. The results are as follows:

While these numbers are as meaningful as the first table, it was the consistency with the first test results that most interested me. The following table shows the deviation between the two tests. The second result was subtracted from the first result, with 0 or close to 0 indicating similar performance.

To account for any testing anomalies, after compiling the second test results, the four exposure durations with the most deviation (none were significantly differing) for each camera were tested a third time (80 additional test shots). The worst of the three results for each camera was thrown out, leaving the results shown in the above tables.

I am very impressed at how consistent the results for the two tests are. The similarity adds credence to the test results.

Here is a summary table showing the combined first and second test results, along with the final scoring.

So, we just got highly analytical with 680 subjective test results. Still, there seems to be some meaning here.

The sharp column from this table is illustrated in the graph included at the top of this post. From these results, it is arguable that the IBIS technology in the Canon EOS R5 is superior to that in the Sony Alpha 1 (for me, on this day, in this location, with the referenced lenses mounted). For example, follow the "10" line in the chart to see the shutter speed I required for a 50% sharp image rate.

Mostly, I experience a 1/3 - 2/3 stop advantage with the Canon camera. That difference is not dramatic, and the bottom line is that IBIS is valuable in both camera brands. This feature adds substantially to the versatility of non-stabilized lenses, such as the 50mm f/1.2 models tested here. IBIS is one more reason to love the latest mirrorless camera models.