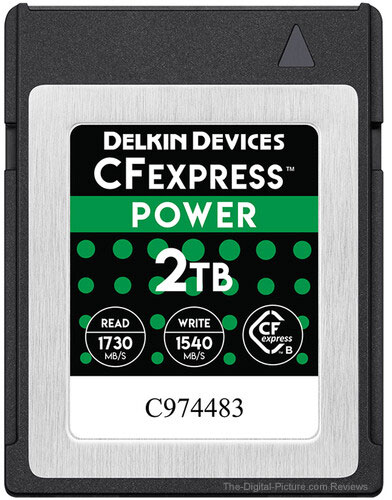 "4K is standard today, 6K is on the rise, and now we're making our way to 8K" says Jenn Sherry, Delkin's Retail Sales & Marketing Manager, "Technology is constantly evolving and as cameras become more advanced, so will the storage solutions associated with them. The possibilities of what CFexpress™ can offer are exciting, and we're looking forward to see what our cards will enable both photographers and videographers to capture.

Each CFexpress™ card has undergone extensive testing to ensure full functionality and performance in today's high-end cinematic hosts, including ones from Canon (C500 Mark II & 1D X Mark III), Nikon (Z6 & Z7), and Panasonic (Lumix DC-S1 & S1R). Testing is currently ongoing in the Canon C300 Mark III & R5, as well as the Nikon D6. Data-intensive capture modes, such as Raw video, would require memory cards like CFexpress™ in order to guarantee continuous recording and safe storage. It is important to note though that CFexpress™ cards are not backwards compatible with either CompactFlash or CFast 2.0 hosts.

As a bonus, every CFexpress™ card is serialized, like your camera, and backed by Delkin's "48-Hour Replacement Guarantee" policy for the ultimate coverage. Not offered anywhere else in the world, Delkin will replace any non-working CFexpress™ card within 48 hours or less (not including weekends), prior to receiving the non-working card. Cards can also be replaced over-the-counter at any authorized Delkin CFexpress™ reseller.

Delkin CFexpress™ Type-B memory cards have the most extensive capacity coverage, ranging from 64GB to 2TB, and are sold through authorized camera stores worldwide. For more information on Delkin CFexpress™ or other memory products, please visit www.delkindevices.com.