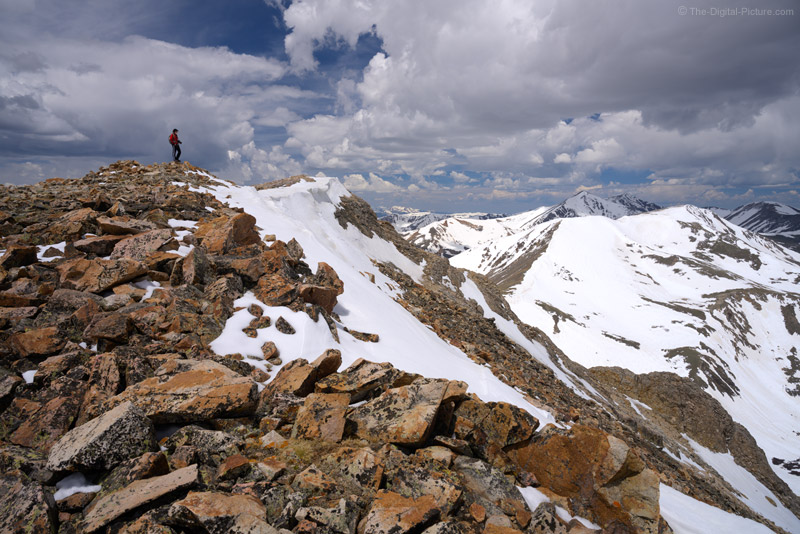 It started out innocently. After verifying firsthand that Mount Evans was closed due to snow and ice, despite it being summer, we decided to explore Guenella Pass. Traveling the entire previous day gave Brittany a strong desire to go for a hike and she didn't have to expend much energy convincing me to take that option.

The plan was to explore the nearby alpine tundra from trails leading from a parking area near the top of the pass. We grabbed a backpack, some water, snacks, and rain shells and set off on what we thought would be a mini-adventure. Carrying the Canon EOS 5Ds R with a Canon EF 100-400mm f/4.5-5.6L IS II USM Lens mounted (primarily for wildlife) and a Nikon Z 7 with a Nikon Z 24-70mm f/2.8 S Lens mounted (primarily for landscape) seemed to be an ideal set of gear for the planned short hike.

While hiking, Brittany continuously wanted to see what was over the next ridge. In this location, deception reigned and the answer to the what is over the next ridge question is always another ridge. Still, we kept asking the question until having climbed mostly rock and snowfield over 2,400' (730m) up in roughly 3.5 mi (5.6km). Unintentionally, we found ourselves on top of a very high mountain.

The view at the top of the 13,800' Table Top Mountain was spectacular. What Brit was feeling from the altitude ... was not nearly as pleasant.

Unfortunately, we needed to promptly go back down and couldn't spend much time on top. Fortunately, Brit found the mental fortitude to get some great photos despite the altitude sickness but she didn't feel good until after a nap back in town.

While I was not as strongly affected by the high elevation, I definitely should have left the 100-400 in the SUV as it gained a lot of weight on this hike.

See the distant thunderhead cloud looming over Brittany's head in the image? That was another reason to go down quickly. That storm brought us near white-out snow conditions for a short period of time during our descent, adding to the day's story.

While photography is great for storytelling, going on photo adventures is a great option for creating stories.