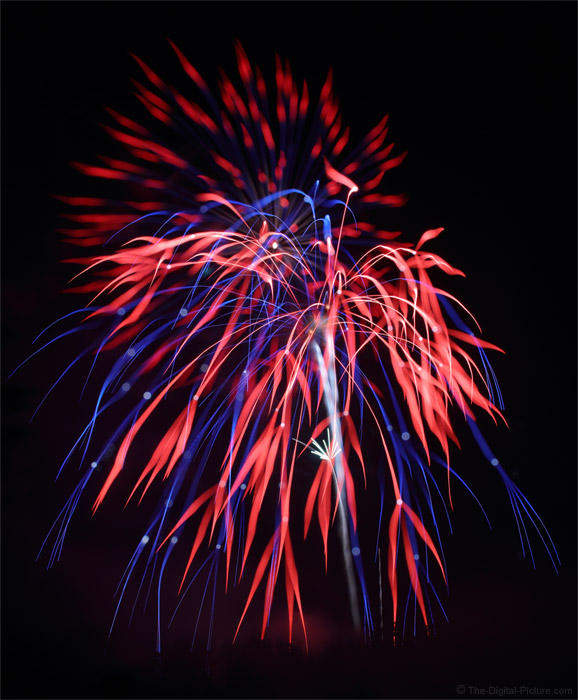 Is your new year starting with fireworks? Photograph them!

If you've photographed fireworks long/frequently enough to be bored with the results, it is time to get creative.

Visiting the local annual fireworks show is a tradition for our family. With years of the normal motion-blurred fireworks images already on the drives, creating unique imagery has become more challenging. To create uniqueness this year, I used the fireworks focus blur strategy for practically the entire show. At least for me, this strategy results in a very low keeper rate. But, having a few of these images that worked out well was worth more to me than having 75 or 100 that looked the same as those captured in previous years.

Let's go over the gear selection for this shot/shoot. A fast frame rate was of no importance and high resolution, sharp imagery was. Thus, the Canon EOS 5Ds R was the perfect choice. The approximate focal length range needed was known and any the 24-something normal zoom lenses would comfortably cover it. I opted for the Canon EF 24-105mm f/4L IS II USM Lens over the Canon EF 24-70mm f/2.8L II USM Lens because a wide aperture was of no importance and ... I had fewer sample images from the newer 24-105mm lens.

A solid tripod was needed, but with over 1 mile of round trip walking required for this shooting location, it could not be heavy. The Really Right Stuff TVC-34 Carbon Fiber Tripod was a perfect choice. A capability-matching tripod head was of course needed. The shooting was going to be 100% in the dark and I wanted all images to be completely level despite the usually-requiring re-framing when the first rockets launch. The UniqBall UBH 45X Ball Head, with its unique capabilities, was the perfect choice. Once the head was leveled, pan and tilt could be adjusted without levelness being changed.

Fireworks are usually launched in the dark and many of us immediately think that large apertures and high ISO settings will therefore be needed. But, that is not the case. Fireworks are so bright that the opposite problem is often encountered. In order to avoid the softening effects of diffraction at the tiny aperture opening required for an ideal fireworks burst exposure, a 2-stop neutral density filter was used. As the f/10 aperture used for this image is still slightly narrower than the aperture where diffraction becomes slightly noticeable, a 3-stop ND would have been a slightly better choice.

Getting the entire fireworks burst in a single image requires a long exposure. The tripod ensures that the camera is stationary during that exposure (avoiding wavy fireworks trails), but the shutter must be opened without causing camera motion. Because timing of the start and finish of the exposure is critical for fireworks photography, a remote release is a requirement.

Fireworks are in fast motion. Thus, their brightness in the image is determined by aperture and ISO. The shutter speed controls how long the rocket and resulting explosion is captured. Since the ideal time duration varies, Bulb mode is the ideal choice. With Bulb mode selected, the release button is pressed, held and released to time with the launches.

Fireworks bursts vary greatly in size. In general, it is better to frame slightly too wide than than slightly too tight. It is easier to crop than it is to build missing light trails. My choice is often to let the largest burst go out of the frame, but keep 90 percent of the explosions entirely framed in black.

A fireworks image seemed fitting to lead a Happy New Year well-wishing post and that wish is what I most want to pass along here. Thanks for a great 2018 and Happy New Year 2019!