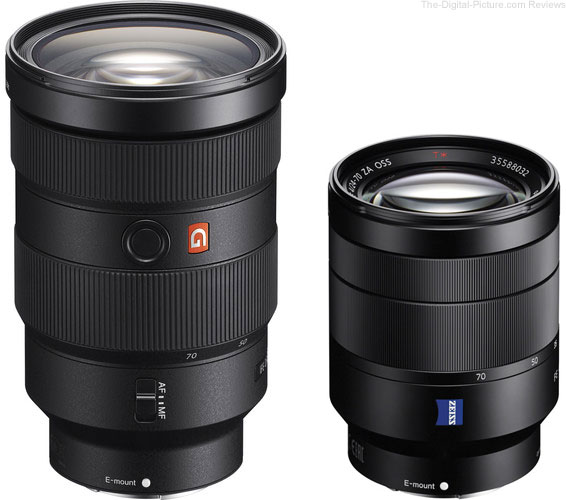 A general purpose lens is the most important and most-used lens in most photographers' kits. With a highly useful focal length range and a wide to moderately wide aperture, 24-70mm lenses can cover everyday needs, portraits, landscapes, cityscapes, food/travel and much more. Sony has two high-performing, 24-70mm constant max aperture zooms in its lineup – the FE 24-70mm f/2.8 GM and FE 24-70mm f/4 ZA OSS – and we're going to take a closer look at them to see which may be better suited to fill your general purpose needs.

From a sharpness perspective, the "sharpest lens" title will depend on the specific aperture/focal length being compared. There isn't really a clear winner when the entire range of tests is taken into consideration. The FE 24-70mm f/2.8 GM shows slightly less vignetting at 24 & 70mm (vignetting is similar at the middle focal lengths) when the lenses are compared at their widest apertures.

When compared at f/4, the f/2.8 lens shows significantly less vignetting. The f/2.8 lens has less severe distortion over the zoom range (the difference is most noticeable at the lenses' widest and longest focal lengths), but most will prefer the f/4 lens' flare performance.

There are many drawbacks to an f/2.8 constant max aperture lens compared to an f/4 constant max aperture lens, including increased size, weight and cost. However, the Sony FE 24-70mm f/2.8 GM's twice-as-wide max aperture will allow you to freeze motion in half as much light at the same ISO setting compared to the FE 24-70mm f/4 ZA OSS. If you're a wedding/event photographer, or prefer not to pack a tripod for nighttime cityscape/street photography adventures, the increased size/weight/cost associated with the f/2.8 lens will prove more than worthwhile. Portrait photographers will also appreciate the better subject-to-background separation provided by the 1-stop wider aperture and the smoother bokeh/better starbursts created by its 9 bladed aperture (vs. 7).

As you can see by the product pictures and specs listed above, the size and weight differences between these two lenses are substantial. Photographers who will benefit from the FE 24-70mm f/4 ZA OSS's smaller size/lighter weight include anyone carrying their gear for long periods of time (for backpacking, vacations, long events, etc.) and those wanting to pack more gear in a similar amount of space.

Previous Post:
How to Mix Audio for Video
Next Post:
Some Tokina Lenses Not Fully Compatible with the Nikon Z 7
comments powered by Disqus