How to Photograph an International Space Station Lunar Transit 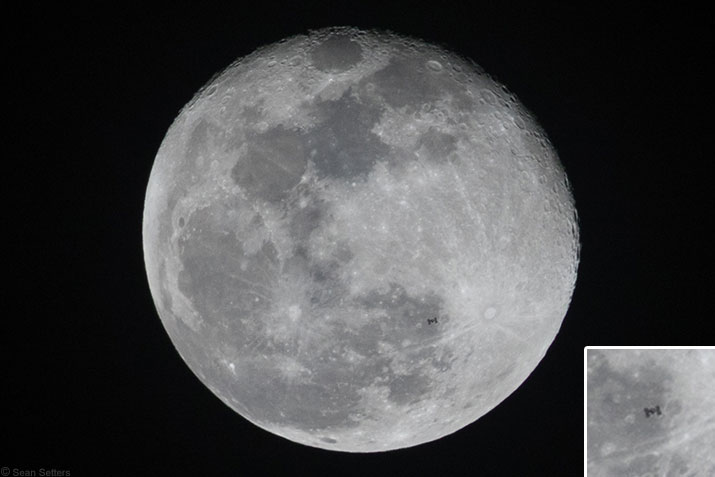 Transit details, according to the site:

The address provided along the center line of the transit belonged to an apartment complex, which was perfect. I could simply park in the parking lot, set up my tripod there and wait for the transit to occur.

As the transit time drew nearer, I packed my Canon EOS 7D Mark II (because of its high burst rate), EF 300mm f/4L USM (precursor to the IS version), tripod and a wired shutter release (TC-80N3) and anxiously watched the sky as patches of clouds rolled overhead. I downloaded an app for my smartphone that could display an NTP synchronized time (down to the milliseconds). This would hopefully allow me to perfectly time my continuous burst. My plan was to composite an entire ISS transit sequence into a single frame using the individually captured burst images.

At 11:15pm, I went outside to find the clouds had vanished. I grabbed my gear, hopped in the car and traveled to the apartment complex parking lot.

By 11:25pm, my EOS 7D II, lens and wired remote were mounted atop the tripod with the moon centered in viewfinder. I fired off a few images to test for proper focus and exposure parameters. With the moon almost full, the exposure parameters I settled on were f/5.6, 1/640 sec, ISO 200. The lens was set to Manual focus and I disabled Anti-Flicker Shooting in the 7D II's menu so that I could achieve the camera's maximum burst rate.

I reasoned that the f/5.6 aperture would give me the sharpest result without diffraction impacting image sharpness, and that a faster-than-1/500 shutter speed would likely allow me to freeze the ISS as it crossed the moon (for longer focal length lenses, an even faster shutter speed would be required). ISO 200 allowed me to achieve a decently bright moon at 1/640 second.

With the transit time only 90 seconds away, I reframed the scene to put the moon slightly lower and to the left of the middle. My earlier tests had given me a pretty good idea of how the moon was traveling through my frame, so I had a good idea where to put the moon so that it would fall right into the middle of the composition to take advantage of the lens' sharpest area of the image circle projected. And then I waited, with the wired remote in one hand and my smartphone in the other, counting down the seconds. As my app passed 11:36:35, I waited roughly half a second and then held down the shutter button for roughly 2.5 seconds. Excitedly, I flipped through the captured images on the camera's LCD screen.

And.... I quickly realized that I had missed the first half of the transit, roughly, with my first image in the burst showing the ISS having already covered approximately 40% of the Moon's surface. My timing was off. I should have taken full advantage of the 7D II's 3-second RAW buffer and started my capture at 11:36:35 to give myself a small buffer before the calculated transit time. Regardless of my failure to capture the entire transit, I really liked the [heavily cropped] composition of the shot shown above.