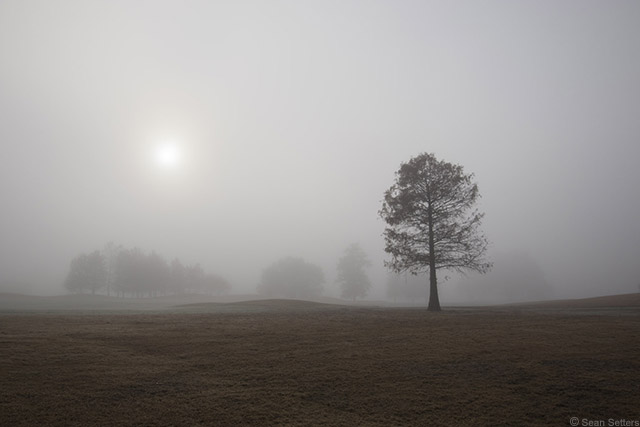 My wife and I are currently staying with family in New Orleans and yesterday I woke to find a dense fog had had settled in over nearby Audubon Park. I grabbed my Canon EOS 7D Mark II (my consummate travel companion) and the EF-S 10-18mm IS STM lens to explore any opportunities the park had to offer.

The first scene that caught my eye was the view from a stone bridge that overlooks Audubon Park Lagoon. As I crossed the bridge, I noticed that ducks were following the water and flying over the bridge at regular intervals. I set the camera to burst mode, pointed it over the water, prefocused on some tree limbs on the left side of the frame, and waited. I photographed several flocks of ducks that passed over me during the 10 minutes or so that I waited, with the image below being my favorite because of the ducks' position in the frame and their reflection in the water. 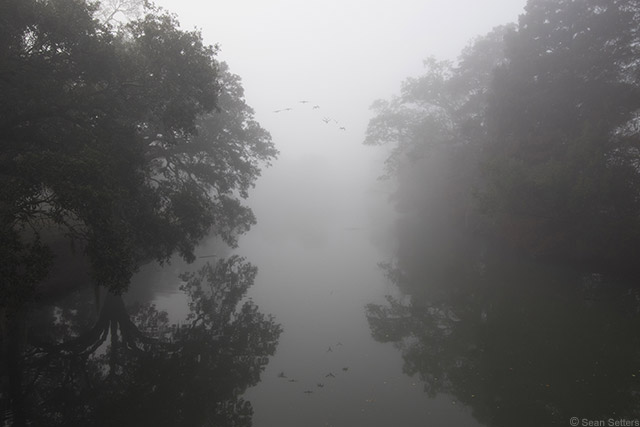 Without the fog, the ducks would have been unrecognizable in the frame as Bird Island splits the lagoon just past the point obscured by the haze.

While following the pathways of the golf course at Audubon Park (it was too foggy for anyone to be playing golf at this time), I came across the scene shown at the top of this post. The fog aided in separating the tree from the background and provided a beautifully soft, ethereal light even with the sun in the composition. Without the fog, the trees in the background would have been a distraction and the scene would have been much less remarkable. The use of a wide angle lens is also key here, as it requires you to get much closer to your subject(s) for them to be prominent in the frame, and the close proximity reduces the amount of fog between the camera and the subject, increasing the clarity and contrast of your subject in relation to background elements.

So the next time you awake to find dense fog with a few minutes to spare, don't hesitate to grab your camera and explore!