Building and Using a DIY Boom Rig for Automotive Photography 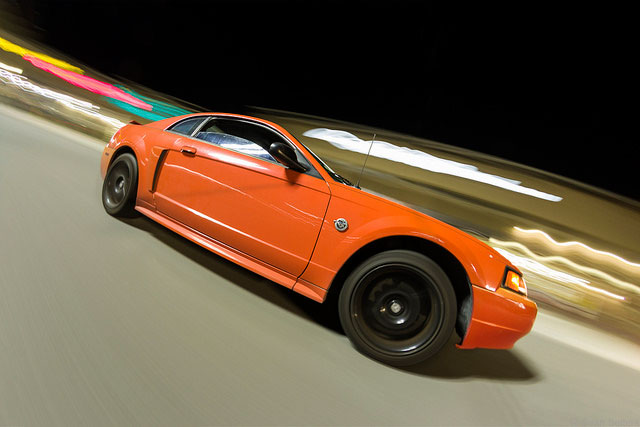 A few months ago, I reviewed the RigWheels RigMount X4 Magnetic Camera Platform, a device that allowed me to safely and securely mount a DSLR to the hood (or just about any other metal part) of a car for capturing dynamic, in-motion automotive imagery. While RigMount platform works perfectly as designed, I became interested in other tools used for similar automotive photography, specifically boom rigs.

It didn't take me long to realize that a specially designed car boom rig can be a significant investment. Therefore, I made it my goal to create a DIY version that met the following requirements:

The "relatively economical" portion is just that – relative. As I had several of the components that I would later employ in my boom setup, the investment cost for me was less than it may be for you, if you don't currently have any of the components conveniently at hand.

Before I go on, let me be absolutely clear – use of a car boom rig involves a certain amount of risk. In other words, you could damage your camera if a suction cup fails, you could damage the car's paint job with a high-strength suction cup and you could easily injure yourself or someone else if they were to get clipped by the boom during a moving photo capture. Proceed with caution; we are not responsible for property damage or injury which may occur as a result of using the gear or techniques described below.

With that out of the way, listed below is the kit I assembled which sufficiently met my requirements above:

Of the components listed above, I already had the ball head, Arca-style clamps/plates, Manfrotto counter balance weight and two super clamps, making the total investment in new gear relatively reasonable. However, even at full cost for all of the components listed above, you'll likely be spending significantly less compared to a specially designed car photography boom rig setup.

Here's a closer look at the components that make up the portion of the rig that holds the camera:

Because I loathe having to screw ball heads onto surfaces over and over again, I've installed a quick-release plate onto one particular ball head so that I can quickly be swap the head between various rigs. With a clamp installed on a super clamp, affixing or removing the ball head takes all of 2 seconds.

Here's basically what the setup looked like in use (taken with my Samsung Galaxy S5): 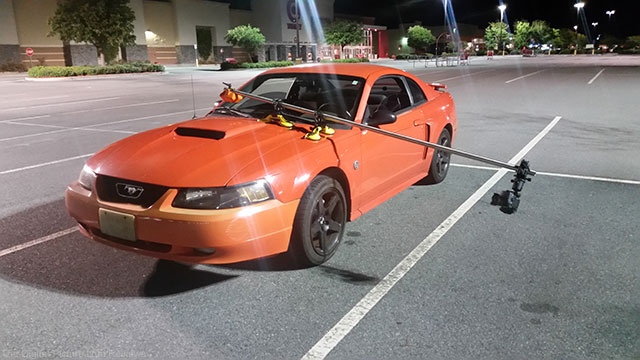 And yes, being roughly 13 years old now, the paint is peeling on the right side of the windshield and the paint on the bumper seems to have faded at a much faster rate. Just after taking the picture above, I disassembled the setup and then recreated it on the passenger side to avoid capturing the peeling paint on the driver's side. I adjusted the front bumper's color in post-processing.

Notes on the DIY Boom Rig

I originally purchased the 96" (8') regular duty closet pole at Home Depot after trying to stress it in store (propping it against a sturdy shelf and pushing on the middle of it) to see if it would flex. A quick test seemed to indicate the regular duty (less expensive, lighter) would work. However, after assembling the components for a test run, I realized that the regular duty pole flexed/bounced a bit too much. Therefore, I bought the heavy duty version instead.

When it comes to booms, 8' (2.44m) isn't necessarily all that long. In fact, a longer pole would likely provide more flexibility in positioning with increased rigidity being required for similar performance. However, as my pole isn't sectional (it doesn't break down), getting anything larger would have required a different vehicle to get my boom to the shooting location. As it was, I was still required to drive to the location with my passenger-side window down with the pole sticking out several inches (I forgot to close the window when capturing the shot atop this post).

Something to keep in mind in regards to boom poles, as the market for car rig photography is relatively small, I don't think anyone is designing boom poles specifically for the purpose. As such, even companies that are selling car boom rig kits are sourcing their boom materials from other companies who design them for other industries. As such, poles designed for windsurfing masts or other similar products could also be used. In fact, you may even be able to purchase your boom pole directly from a tubing manufacturer, with a wide range of materials and specifications to suit the purpose.

When affixed properly to flat portions of your vehicle, the aluminum suction cup holders in the setup above worked quite well in my limited experience (3-4 test runs). Depending on the shape of your vehicle, though, finding flat enough areas for optimal suction can be challenging without articulation between the two handle-connected suction cups. An even more versatile (and more professional-looking) solution would be to use Avenger F1000 Pump Cups, high-power 6" suction cups with a baby swivel pin. Using the Avenger F1000s would require a smaller flat working area and would eliminate two of the super clamps needed in my particular setup. Another benefit of the F1000s is that there is visual confirmation of proper suction, as a red line will appear on the pump when suction is at a critical level (requiring a few more pumps).

Be sure to clean your hood of dirt and debris to ensure the best possible connection between your suction cups and the car. Years ago, a photographer friend of mine who used to do these kinds of shots warned me that strong suction cups can damage a car's paint job, so he typically used paint protection film under the suction cups to protect the car's paint job.

Also note that suction cup mounted car rigs should not be used in colder weather, as suction cups will lose suction very quickly at lower temperatures.

Also pictured in the setup shot above are the Canon EOS 7D Mark II (set to intervalometer mode) and Rokinon 8mm f/3.5 Fisheye lens used to create the final image, with settings of f/5.6, 1s, ISO 160. For the location, I chose to shoot at a large shopping plaza near midnight to ensure I had an expansive open area (parking lot) with almost no obstacles aside from the easily avoidable light poles.

An important thing to keep in mind when creating your in-motion car images while using a boom rig is that you will likely want to remove the boom rig in post-processing. That means that you may wish to be careful how you position the camera and rig so that hard-to-recreate elements of the car are not blocked by the suction cups or boom pole. To keep post-processing requirements to a minimum, I purposefully positioned the camera so that the suction cups could be seen just above the edge of the car. If the camera had been higher, the suction cups would have blocked a portion of the hood scoop which would have been difficult to recreate in post-processing. If you are an expert in Photoshop, you'll likely have more leway in positioning the camera.

In post, I applied some distortion correction to remove much of the fisheye look while leaving some of the lens' distortion intact, as well as minor color corrections (including adjusting the color of the bumper) before tackling the boom removal. Here's a before/after shot showing the removal of the boom.

After working with the image, I decided that I wanted less tilt and a looser framing. I decided to give Photoshop CC's Content Aware Crop a try to see how well it generated extra space around a significant portion of the edges. I was pleasantly surprised by the results.

If I were going to be offering this type of photography to potential clients, I would probably change a few things about my setup and image-capturing procedure. For one, I'd likely use two Avenger F1000 Pump Cups with Baby Swivel Pins for easier positioning of the rig and the visible indicator of proper suction provided by the red line on the pump. I actually own one of those pumps from a project I did years ago, and upon testing it yesterday, it took about 10 seconds to affix to my hood and about 5 minutes of forceful pulling to remove it.

Also, instead of having the client actually drive the car with the boom rig installed, I think a better idea would be to push the car and simply use a longer shutter speed for a similar effect. That will reduce vibrations induced by the engine as well as lessen the chance impacting obstacles with the boom with avoidance being even easier at ultra-slow speeds. Of course, those pushing the car would need to remain in an area blocked from view by the car.