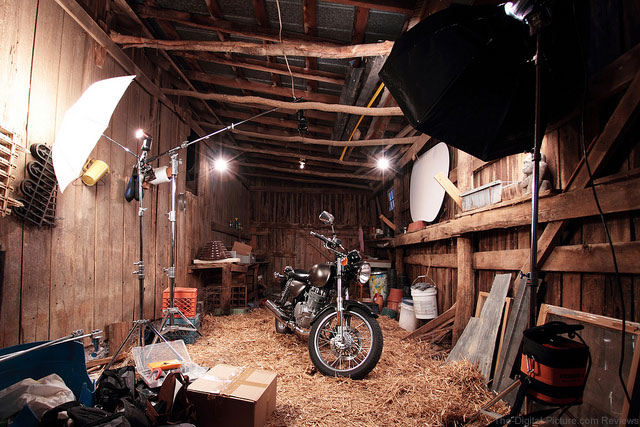 There are many types of off-camera flashes available for consideration, so let's go over the primary options. While the term "flash" could be used interchangeably to describe any of the following options, we'll be using the term "shoe-mount flash" to describe flashes featuring a hot shoe and "studio strobe" to describe the bulkier, more powerful flashes.

"Ok, so I own a Canon/Nikon/Sony camera... does that mean I have to buy all Canon/Nikon/Sony flashes for off-camera use?" The simple answer is, "No," but there are certainly some advantages to building a camera brand specific kit. Camera brand shoe-mount flashes – like the 600EX II-RT – can communicate with each other wirelessly through optical and/or radio means and can automatically calculate the amount of flash necessary to provide the correct exposure as determined by your camera (ETTL, iTTL). Optical triggering requires line-of-sight (each flash must be able to see the master flash or commander unit), and its range is fairly limited (especially outside in bright sunlight). Radio-enabled flashes provide much more range without the limitation of line-of-sight positioning. With an all Canon/Nikon/Sony flash system, you'll be able to enjoy the benefits of high-speed sync (exceeding your camera's max flash syncs speed) and rear-curtain sync (where the flash is coordinated to end with the rear curtain). Note: Nikon users can enjoy the benefits of rear-curtain sync even with non Nikon-branded flashes.

There are also some third-party flashes that mimic the capabilities of the camera brand flashes providing full communication with your camera and similar features at a reduced cost. However, sometimes these flashes can be incompatible with older and/or yet-to-be-released camera bodies. If the third party flash manufacturer does not release an updated firmware, or otherwise, there is no way to update the flash's firmware, then you're simply out of luck.

Third-party manual flashes offer a relatively no-frills option as they do not feature wireless communication and power levels must be adjusted manually. These types of flashes work well in indoor studio setups where the flash is placed in an easily accessible location (they are not very convenient when the flash is boomed above a subject and the power level requires adjustments). Manual flashes typically require a radio trigger to sync the flash with the camera's shutter, but some manual flashes offer optical slaves which can trigger the flash when it sees other flashes fire.

The downside to all shoe mount flashes is their somewhat limited power. They tend to work great indoors and in times when the ambient light is not necessarily abundant and bright, but outside of those situations or when modifiers are used, you may find yourself wishing you had a few more stops of flash power at your command. If your photography lighting applications require more power, you'll want to look at the available studio strobe options described below.

The two most common types of studio strobes include monolights and pack & head systems. With monolights like the Profoto D1, the flash bulb, modeling light, cooling system and power supply (requiring AC input) are all contained within the flash head's housing. In a pack & head system (Profoto Pro/Acute/D4) , the power source (often called a generator or power pack) is a separate component from the flash head. As you likely guessed, both these systems have benefits and drawbacks compared to the other.

Benefits of a pack & head system include smaller/lighter flashes, the ability to run off of battery power or AC and remote control of power levels via the pack with only one radio device needed for triggering all connected flash heads. Downsides to a pack & head system include a single point of failure (pack) could render all flashes unusable, power cords running from a single location to all flash heads (making positioning lights difficult at times) and higher cost.

Benefits of monolights include [generally] lower cost and easier positioning of lights assuming multiple AC outlets are available. Downsides include the need for a radio trigger for each individual light (unless the monolight features a built-in optical slave and your shooting situation allows for that type of triggering), AC power requirements and having to adjust power levels at each light (unless a radio triggering system is available that can perform power level adjustments).

Relatively new to the industry are battery powered studio strobes (Profoto B1, Broncolor Siros, Interfit S1, Dynalite Baja, Phottix Indra) which offer the power of traditional studio strobes with the flexibility and convenience of a user-replaceable, rechargeable battery built right into the flash head unit. Most of these strobes feature built-in wireless receivers providing benefits such as independent power control (possibly even TTL) and high-speed sync.

With benefits of increased power and the inclusion of built-in rechargeable batteries (making them an excellent option for on-location/outdoor setups), the downsides of battery powered studio strobes compared to shoe-mount flashes include increased size, weight and higher cost.

While there are certainly products that fall in between these categories offering a blend of benefits and drawbacks, the groups listed above constitute the majority of what's available for off-camera flash use. And with so many options available, it's very likely that you can find a flash/strobe setup (or mix of these products) which can adequately cover your lighting needs.

In our next installment in this series, we'll take a look at the wide range of radio triggers available in the today's marketplace.