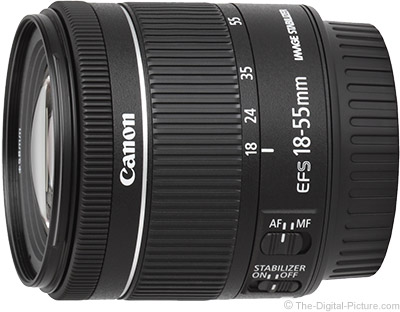 Image quality, vignetting, flare and distortion test results along with specs, measurements and standard product images have been added to the Canon EF-S 18-55mm f/4-5.6 IS STM Lens Review page.

While this lens is not on most people's most-wanted list, it serves a purpose.

One of the benefits from the new 18-55 is the smaller retracted size. Here is a size comparison showing the new version alongside the two prior version lenses. As you will notice in the comparison (and confirmed by our measurements), the new lens zoomed/extended to 55mm is nearly the same length as the prior lens at this focal length.