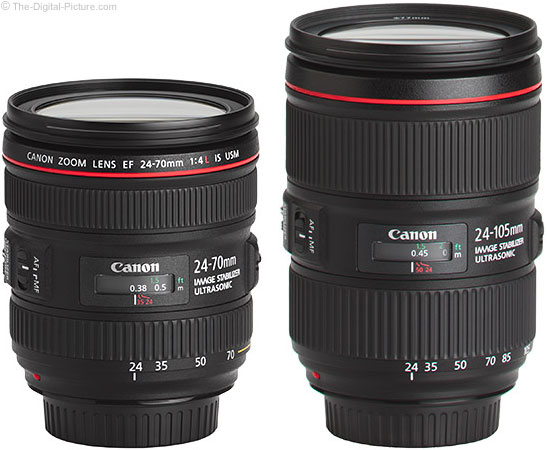 With two excellent, similarly-priced general purpose zooms available for Canon users, both of which feature an f/4 maximum aperture, weather sealing, great AF performance and image stabilization, choosing between the EF 24-70mm f/4L IS USM and EF 24-105mm f/4L IS II USM can be a challenge.

The primary and significant advantage held by the 24-105 f/4L IS II is the extra 35mm of focal length range on the long end.

For many, a more significant advantage of the 24-70 is its very impressive macro capability. A 0.70x maximum magnification from a non-prime-macro lens is eye-opening and significantly more impressive than the 24-105L II's 0.24x spec. However, it should be kept in mind that a 12mm extension tube can push the 24-105 to 0.60x maximum magnification. Disclaimer: I have not made an image quality comparison with the extension tube in play.

Image quality comparisons I have made show that:

The lenses are more similar than they are different in terms of sharpness. The 24-70 has less CA at 24mm, but more at 70mm. The two lenses have a similar amount of vignetting aside from at 24mm where the 24-105 has an advantage even stopped down. The 24-105 shows less flare effects while the 24-70 has less linear distortion.

Affecting image quality on a limited basis is the aperture blade count. The 24-70 has 9 blades vs. the 24-105 L's 10. This difference will primarily be noticed when point light sources are photographed at narrow apertures, with the odd blade numbered aperture creating 18-point sun stars vs the even's 10-point stars.

On the whole, I would not consider image quality to be a primary differentiating factor between these two lenses.

If price remains a deciding factor for you ... the Canon EF 24-70mm f/4L IS USM's retail price is slightly lower than the freshly released EF 24-105mm f/4L IS II USM's, though rebates will likely increase or decrease the price differential from time to time.