Should You Turn Off "IS" When Using Action-Stopping Shutter Speeds? 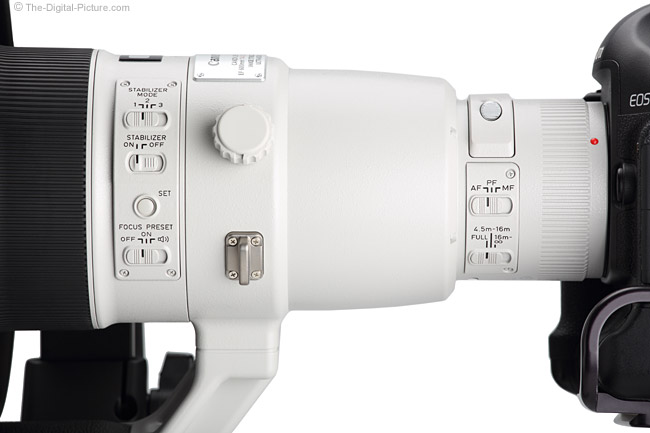 We recently spoke with a high-level Canon representative about the benefits of using image stabilization when high shutter speeds are being utilized to stop fast action. While the information below should not be considered official Canon guidelines, they do represent the experiences of a person who has had a substantial amount of experience with Canon lenses and their IS systems.

It's definitely true that there's a point, as shutter speeds get progressively faster, that the shake-prevention qualities of Image Stabilization really have little or no added effect. In other words, if you take a 600mm f/4L IS lens, mount it on a monopod (definitely NOT a totally stable platform, obviously!), and shoot at 1/8000th of a second, it's absolutely arguable that I.S. has no direct benefit in terms of minimizing camera shake. I think we can agree that with or without I.S., most users could get consistently shake-free pictures with that monopod-mounted 600 at 1/8000th of a second.

Turning I.S. off in situations like that (maybe not at 1/8000th, but perhaps at 1/2000th or thereabouts) will save a small amount of camera battery power... probably a minor consideration to most users, but perhaps a bit more relevant to someone working with a camera like an EOS Rebel or the new EOS 77D, which have smaller batteries with less capacity than, say, an EOS-1D X Mark II. Definitely a potential consideration for anyone shooting with a mirrorless camera like an EOS M5, which *always* have less battery life per charge, since they use more power-hungry LCD monitors or electronic viewfinders.

For sports, action, wildlife and so on, keep in mind the potential benefits of a more stable image in your viewfinder. Even if your shutter speed pretty much precludes any problems with camera shake, if I.S. is active and set to Mode 1 or Mode 2, you see a steadier, more stable view in your finder when working on a monopod or a gimbal-type tripod mount. This can be beneficial in a number of ways, from subtle benefits in frame-to-frame composition when following moving subjects, to being able to keep an AF point solidly upon a detailed area of a moving subject.

For those who consider the effect of visible stabilization during shooting to be an annoyance (for instance, it may seem to delay rapid lens movements to follow a moving subject), there is Mode 3 on lenses like the 400/2.8 II or 600/4 II. This is a specialized I.S. mode that does provide the shake-prevention effects, but ONLY when the shutter button is **fully** depressed, and a shot is actually being taken. Otherwise, at all other times, the effect of I.S. is disabled, although stabilization detection is continually taking place between shots, and the lens's moveable stabilization optical elements are held in a non-locked, "ready" position. In other words, in Mode 3, you don't SEE the effect of stabilization, but it still is there when you actually shoot each picture.

Here's one that never gets discussed among sports, action and wildlife shooters, but which our engineers HAVE said is a benefit of Image Stabilization, even at the fastest shutter speeds. Because Canon's I.S. is optical, if you do have your stabilization set to Mode 1 or 2, where it's continually active, the viewfinder isn't the only place where a steady, stabilized image is seen. The FOCUSING SYSTEM also gets the same benefit of a clean, steady and stabilized look at the subject, too. This matters, especially during fast, high-speed sequences, and even more so if/when you're shooting subjects that are (a) moving aggressively, and (b) may not have tons of detail, contrast and texture to them. The AF point or points being used must see some detail, and during a fast, AI Servo AF sequence, have less than 1/10th of a second in cameras like an EOS 7D Mark II, or certainly an EOS-1D X model, to read the subject between each frame. By using I.S., regardless of how fast the actual shutter speed is, the AF system gets a cleaner, steadier look at the subject during that interval between each frame, and is more likely to be able to read subject detail and provide continuous AF where most or all frames in a sequence are sharp (in terms of FOCUS).

I know there's a body of thought out there among some sports shooters that since they're already at fast shutter speeds, I.S. isn't needed, but they should contemplate what I just said. And, there's a body of thought that I.S. being active can slow down AF... I've directly asked our leading engineers that, and been told emphatically that this is NOT true, regardless of anecdotal "evidence" some shooters may feel they've experienced.

Bottom line, my basic suggestion would be to leave it on, unless you absolutely have deliberate reasons for not doing so. Consider the above points; remember the potential impact of Mode 2 (panning mode, so to speak) and Mode 3 (stabilization, but without visible effects in the viewfinder); and we do still suggest turning I.S. off if you know you'll be mounted to a completely rigid, locked-down position. Question: Extending your engineering discussion … I understand the benefit of IS to the AF system. What about when the subject is moving rapidly and IS is trying to hold the image still? It seems to me that the AF system would be better having the exact subject framing present at the moment it is making its decision. And, isn’t the addition of Mode 3 supporting this concept?

Like I said, if you have distinct reasons for shutting I.S. off, go for it. But, in the VAST majority of action-type situations, especially with human-subjects (football and similar sports), the likelihood the movement would be SO sudden that what I.S. projects into the viewfinder and the subject's actual composition at the same time or an instant later would be extremely different is probably pretty slim. At least, in my experience. Might be a little different for someone photographing small birds in flight with a big lens, from relatively close distances.

The addition of Mode 3 *might* bring some benefits if and when you feel this difference in what you see vs. what you shoot is happening, but it's not the sole reason for its existence.

Most of the time, I'm very comfortable to suggest using I.S. Mode 1 or 2, even at fast shutter speeds, and with nearly all moving subjects. But I repeat, if for whatever reasons you feel it's hindering your ability to compose in real time, either switching to Mode 3, or turning I.S. off completely, remain options as well. So, there you have it. Even when using shutter speeds fast enough to negate camera shake, leaving image stabilization "On" is generally a good idea. If nothing else, it's providing a stable viewfinder scene for you and the AF system, allowing for easier tracking of moving subjects.