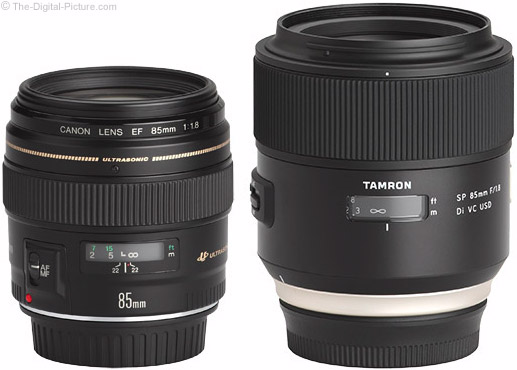 A fast, 85mm prime lens is often a portrait photographer's best friend. The focal length helps to create a flattering perspective (ideal for faces) while the wide aperture aids in separating a subject (or subjects) from the background.

As such, many planning to invest in an 85mm prime will likely consider the Canon EF 85mm f/1.8 USM and Tamron 85mm f/1.8 VC USD. To assist in the decision making process between these two lenses, we're going to take a look at how they compare.

First off, let's start off with the similarities. Both lenses feature the same focal length and same wide f/1.8 aperture. Both are compatible with full frame cameras as well as APS-C sensor cameras. There, that was easy. Now let's move onto the differences.

The Canon 85mm f/1.8 USM was released in 1992; the Tamron 85mm f/1.8 VC was released earlier this year (2016). The Tamron exhibits more even sharpness from the center of the frame to the corners, where it is noticeably better than the Canon. The IQ difference is significant, especially when factoring in the Canon's rather heavy CA wide open. Distortion is slightly better controlled with the Tamron (but neither is bad) and the third-party lens handles flare a bit better too.

The Tamron also features Vibration Control rated to 3.5 stops of assistance, meaning you can handhold this lens in much lower light compared to the Canon. For many, that additional feature alone would be the deciding factor in choosing the Tamron lens over the Canon offering. Tamron also offers a significantly longer warranty than Canon (6-years vs. 1-year).

So far, it looks like the Tamron is the clear winner of this comparison. But the Canon has three important advantages that should not be overlooked – size/weight, consistently accurate AF and a much lower price.

As Tamron must reverse engineer Canon's AF algorithms as opposed to having the blueprints at hand, you can expect the Canon 85mm f/1.8 USM to focus more consistently with better AI Servo tracking. Note that the Tamron also suffers from focus shift as the aperture is stopped down. To compensate for this behavior, you may need to focus slightly in front of your subject when using narrower apertures.

One way Tamron is dealing with AF issues (including the possibility of incompatibility with future DSLRs) is by copying Sigma's approach of end-user firmware upgrades and AF customizability with the introduction of their TAP-in Console. Purchasing the relatively inexpensive accessory (compatible with recently announced Tamron lenses) will ensure your lens works the best that it possibly can.

Now let's look at prices. At full MSRP, the Canon EF 85mm f/1.8 acquisition would require only 56% of the investment required to purchase the Tamron. And with the Canon currently qualifying for an instant rebate, you could purchase two of the Canon lenses for the price of the Tamron. For budget-conscious consumers (especially those investing in their first prime lens), the price difference will be the biggest deciding factor.

Some may wonder why I didn't include the Canon EF 85mm f/1.2L II USM and the Sigma 85mm f/1.4 EX DG HSM in this comparison. From my point of view, the Canon EF 85mm f/1.2L II USM is a more specialized tool and carries a price tag to reflect its status. If you need its 1-stop aperture advantage, there is nothing else that is comparable. And as far as the Sigma 85mm f/1.4 goes... it's currently listed as "discontinued" at B&H (Canon mount).

I wonder if that implies anything?