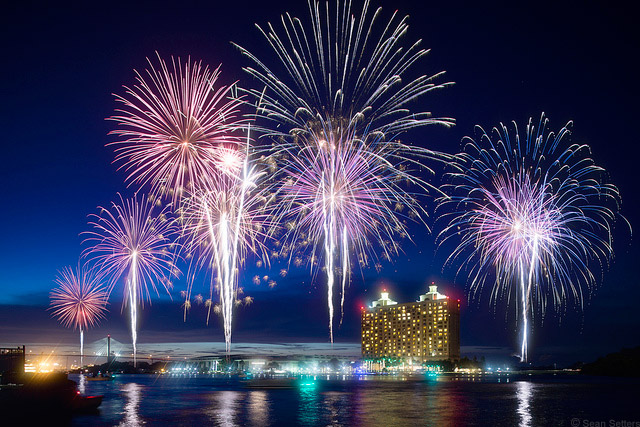 Before I go any further, I must make one thing very clear:

Having never attended an Independence Day celebration on Savannah's River Street before, I asked several people where exactly the fireworks were launched from. I was told the fireworks launched from behind the Westin Savannah Harbor Golf Resort & Spa on the other side of the Savannah River. Therefore, my plan was to position myself on the east end of River Street near Belles Ferry, where I hoped I could include the Westin hotel and possibly a small portion of the Talmadge Memorial Bridge in my fireworks image.

The fireworks were scheduled for 9:30pm. Expecting a sizable crowd on River Street, my goal was to pack my gear so that it was minimally cumbersome and as light as possible. I knew that shooting fireworks would require some type of support, but the idea of carrying a full tripod downtown (even if affixed to the outside of my backpack) did not appeal to me. In this particular case, I didn't think my very-travel-friendly Feisol TT-15 Mini Carbon Fiber would be a feasible option as I would likely have to utilize one of the concrete supports positioned by the river as the base, and having my camera atop a tiny tripod next to a river did not sound like a good idea. I wondered if I could cobble together a few odds and ends from around the house that could do the job.

So here's the solution I came up with: 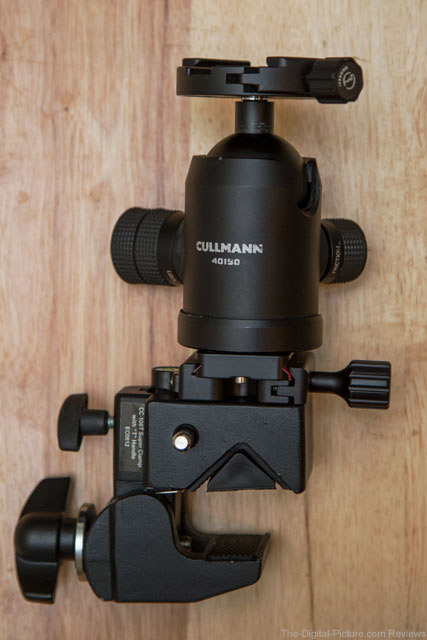 Above you'll find older Cullman (my first) ball head with an Arca-style plate attached to the bottom. Affixed to that is an Arca-style clamp which has been bolted to an Impact Super Clamp with T-Handle.

This setup can be broken down into two pieces (at the clamp) for compact backpack storage and, when assembled, affixed to just about any fence which borders the Savannah River along River Street.

Not knowing exactly which focal length might provide the optimal framing for the event, I packed a Lowepro Flipside 400AW with my mobile support setup and the following gear:

Amanda and I planned to meet up with a few friends downtown before the scheduled fireworks. Unfortunately, we ended up getting to River Street later than I had intended (8:45pm). As we descended onto River Street, I realized the crowd was much larger than I had anticipated. Almost every square inch of the fence bordering the river was accounted for. It took me about 20 minutes to find a gap along the fence where I could position my camera, after which I attached my support rig, 5D III, TS-E 24mm f/3.5L and TC-80N3 remote timer. With only 10 minutes left before the show, I hurriedly composed the scene and took a few pictures at 10x Live View to obtain proper focus on the hotel building (in this case, anything beyond 14 feet would be in focus because of the hyperfocal distance). My camera settings were f/4.5, 5 seconds and ISO 200.

Unfortunately, my tardiness in getting to the location combined with the hot/humid Savannah night meant that condensation was inevitable. While I did wipe off the end of the lens before shooting my test images used for focusing, condensation immediately reappeared and caused halos around all the bright lights in the image. I decided to wait for the condensation to clear up in hopes that it did so before the fireworks show began.

At almost precisely 9:30pm, the fireworks started. However, instead of being launched from directly behind the hotel as I had been led to believe, they were actually set off several hundred yards to the east. I quickly rotated the ball head, re-leveled the camera and began shooting the fireworks (using the remote). Unfortunately, this framing led to a very uninteresting backdrop for the colorful display.

With my original plan out the window, I decided to try something I had used on a previous fireworks image – compositing. I changed my camera settings to isolate the explosions from the surrounding background: f/5-6.3, 8 seconds, ISO 100. These settings allowed me to capture 1-4 bursts in each frame, depending on how fast they were launched. In post processing, I would overlay my favorite fireworks images with the original framing I had imagined.

At the end of the night, I was left with about 150 images of fireworks that looked like this: 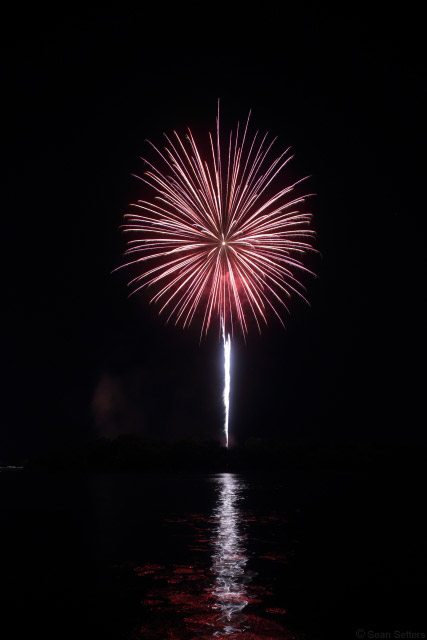 Unfortunately, I only captured a few test shots of the hotel scene before the fireworks started. As such, even my best image showed very noticeable halos around the lights.

I selected my favorite fireworks images in post processing and composited them with my hotel image using a "Lighten" blending mode in Photoshop CC. Note that this blending mode also allowed the fireworks' reflections in the water to be seen which was key to making the image look somewhat realistic. I also added a slight Gaussian Blur to the fireworks to simulate the type of halos/lack of sharpness visible in the base image.

Things don't always go as planned. As photographers, we sometimes have to roll with the punches and do the best with the cards we're dealt. In this case, the fireworks launching location meant that I couldn't capture the scene I had in mind in-camera. And the lateness of my arrival, combined with the hot/humid weather meant that my base image in the composite didn't turn out as well as I would have liked. However, my mobile support rig worked very well and I'm not completely dissatisfied with the final image. The halos seem in the base image actually add a dreamlike quality to it; maybe it's a fitting look as the image never actually happened in real life, but only in my dreams.