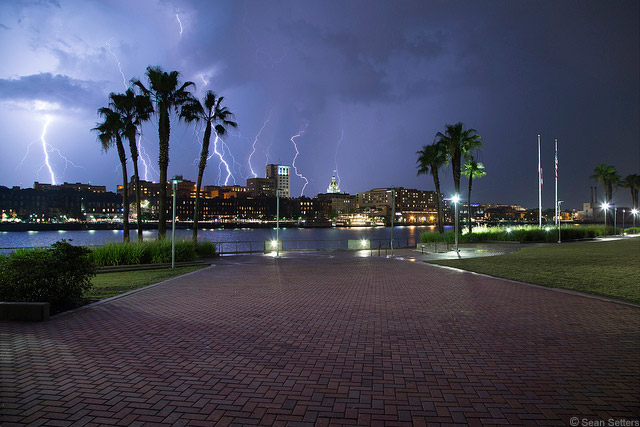 Back in late 2014 I purchased a Vello FreeWave Stryker from B&H (via a Daily Deal) with the intent of exploring lightning photography. After only a few times using the device, I fell in love with the endeavor. However, while the device worked well for me in very dark conditions, the device could not be correctly set to trigger the camera if the ambient light was above a certain [very low] level.

In this case, patience paid off. In February B&H featured the Miops Camera Trigger in another Daily Deal; I decided to pick one up. Not long afterwards I also purchased the OP/TECH USA 8" Small Rain Sleeve to protect my camera during the anticipated downpours.

With storm season well underway, I can say I've been very impressed with the device. It can be set to detect lightning and trigger the camera in significantly brighter conditions compared to the Vello FreeWave. And the OP/TECH USA rain sleeve has proven to the perfect tool for protecting the camera. I even used it when photographing dirt track racing with Bryan a few weeks ago.

Miops camera trigger and camera protection in-hand, I began planning where I wanted to capture lightning. After a little bit of exploration, I settled on a view of River Street as seen from the Savannah International Trade and Convention Center just across the Savannah River. The location was optimal because it gave me a great view of downtown Savannah with City Hall (the gold domed building) being recognizable in the center of the frame. The convention center's awning also provided a decent amount of rain protection, though gusts of wind would still compromise gear if left uncovered/unprotected.

With the location decided upon, I needed to organize the right gear to tackle the job. And just in case I forgot to check the weather for a given day, I also installed Dark Sky - Hyperlocal Weather on my Android phone in order to receive alerts whenever precipitation was imminent. I also created a bookmark for LightningMaps.org which showed lightning activity around Savannah. After receiving a notice of precipitation, I would quickly check the map to see if lightning was also headed my way.

I keep a Go-Bag packed and ready for immediate use whenever storms are in the forecast. This allows me to bolt (pun intended) out the door at a moment's notice.

While the lenses have changed slightly in my Go-Bag over the last couple of months, most of the items remained constant. For the image above, my Go-Bag contained:

Every time I received a Dark Sky precipitation warning and confirmed lightning was headed toward Savannah, I would grab my gear, head downtown, drive across the Talmadge Memorial Bridge and make my way to the convention center. It took me four attempts, but this past Tuesday I was finally able to capture the lightning I had envisioned.

As I crossed the Talmadge Bridge Tuesday evening, I could see a significant amount of storm activity to the west. The storm was getting very close. As I was setting up my equipment, a light sprinkle of rain began to wet the ground. Soon after, it looked like a strobe light was illuminating the sky. Most of the lightning was occurring above the clouds, but every now and then one would connect with the ground within my camera's field of view.

I chose to use the EF 24-105mm f/4L IS USM because its hood would be more protective against the rain compared to the EF 17-40mm f/4L IS USM's hood. I used 10x Live View and manual focus with the camera set to f/5.6, 8 seconds at ISO 100. The f/5.6 aperture was chosen because it allowed me enough depth of field at 24mm to have most everything in focus while also keeping individual lightning bolts from overexposing the sky. An 8-second shutter speed allowed for the city lights to be decently exposed. While these settings worked well under individual strikes, multiple strikes within the 8-second shutter speed would cause overexposure in the sky especially if the bolts were large and nearby.

I varied the Miops Trigger's sensitivity throughout the evening so that I could limit the camera's captures to instances when they were more likely to capture a compelling lightning strike. With the sensitivity set too high, the camera would trigger at the reflection of lightning bouncing off of the clouds with no actual bolt within view. Finding the preferred setting proved very easy, though.

The final image above is a composite of several images taken that night. In post processing, I layered all the individual images that featured interesting lightning bolts and set them to a "Lighten" blending layer to allow the brighter parts of those images to come through. A few parts of the scene required masking so as not to have duplicate ghost items in the image (especially true around the flag poles where wind blew the flags occasionally).

In short, I captured an image that was very close to what I had in my head and the Miops Trigger helped me do it. The Miops Camera Trigger allows for many other types of triggering, including sound and laser triggering (which certainly increases its value). Personally, I wouldn't bother getting the mobile-branded kit as you can just as easily control the Miops trigger (connected to the camera) via your mobile phone rather than control your phone (connected to the camera, requiring an additional cable) via the Miops trigger. The only time the mobile kit would be beneficial is if you need the Miops device to be positioned well away from the camera for triggering purposes.