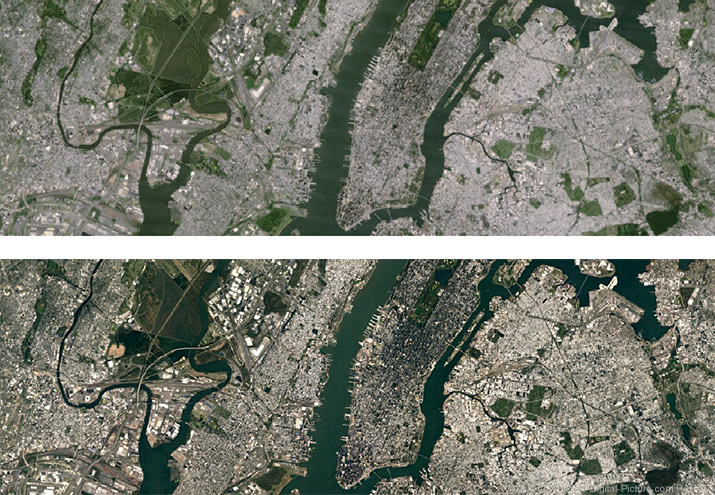 From the Google Maps Blog:

Three years ago we introduced a cloud-free mosaic of the world in Google Earth. Today we’re rolling out an even more beautiful and seamless version, with fresh imagery from Landsat 8 satellite and new processing techniques for sharper images than ever before. Satellite images are often cloudy, but not always over the same place, so we looked at millions of images and took the clearest pixels to stitch together this cloud-free and seamless image.

Landsat 8, which launched into orbit in 2013, is the newest sensor in the USGS/NASA Landsat Program—superior to its predecessors in many ways. Landsat 8 captures images with greater detail, truer colors, and at an unprecedented frequency—capturing twice as many images as Landsat 7 does every day. This new rendition of Earth uses the most recent data available -- mostly from Landsat 8 -- making it our freshest global mosaic to date.

To produce this new imagery, we used the same publicly available Earth Engine APIs that scientists use to do things like track global tree cover, loss, and gain; predict Malaria outbreaks; and map global surface water over a 30 year period.

Open data is good for everyone

This update was made possible in a large part thanks to the Landsat program and its commitment to free and accessible open data. Landsat, a joint program of the USGS and NASA, has observed the Earth continuously from 1972 to the present day and offers a wealth of information on the changes to the Earth's surface over time. And it's all available in Earth Engine!

The new imagery is now available across all our mapping products. To check it out, open up Google Earth, or turn on the satellite layer in Google Maps.