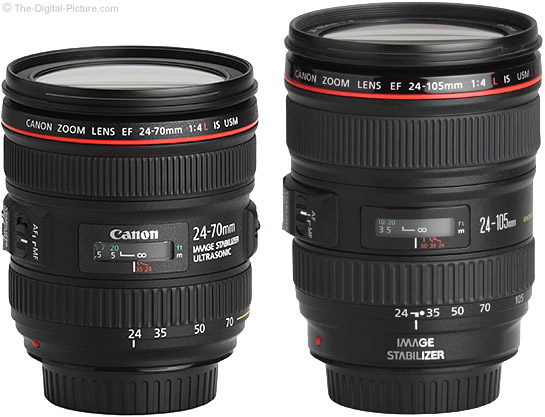 This is a question that I've been asking myself since the Canon EF 24-70mm f/4L IS USM Lens was introduced back in 2012. Since that time, I have second guessed my own decision multiple times, my vacillating illuminated by the fact that I've had and sold two different 24-105 L Lenses since then. Initially, the significantly higher price tag of the 24-70 f/4L IS made the recommendation decision considerably easier. Now that the list prices have completely equalized (though rebates potentially change the equation significantly), the merits of the lenses themselves become the bigger decision factors.

The first significant fact to understand is that these are both great lenses and for most, there is no wrong decision to be made here. Both lenses are well built including weather sealing, focus fast and accurately, have a great general purpose focal length range and have IS. They share a very similar design including appearance and on many accounts, can be used interchangeably.

The primary and significant advantage held by the 24-105 f/4L IS is the extra 35mm of focal length range on the long end.

A stronger advantage for the 24-70 is its very impressive macro capability. A 0.70x maximum magnification from a non-prime-macro lens is eye-opening and significantly more impressive than the 24-105's 0.23x spec. However, it should be kept in mind that a 12mm extension tube can push the 24-105 to 0.60x maximum magnification. Disclaimer: I have not made an image quality comparison with the extension tube in play.

Image quality comparisons I have made show that:

Affecting image quality on a limited basis is the aperture blade count. The 24-70 has 9 blades vs. the 24-105 L's 8. This difference will primarily be noticed when point light sources are photographed at narrow apertures, with the odd blade numbered aperture creating 18-point sun stars vs the even's 8-point stars.

If price remains a deciding factor for you ... even though the list prices are equal, there remains at times a considerable difference, thanks to a rebate and a reward differential.

Willing to buy a white box and/or gray (same lens not imported by Canon USA) version? On eBay, the Canon EF 24-105mm f/4L IS Lens can currently be found for as little as $595 – an incredible value. Not too far behind is the Canon EF 24-70mm f/4L IS Lens in white box condition currently priced at starting at $675.00 on eBay. These prices change, so check these links to get the latest.

Buying these lenses in refurbished by Canon condition is another great option. Expect Canon refurbished lenses to be in like-new condition and they usually (verify) have a same-as-new warranty. Check refurbished inventories at B&H, Canon and Adorama.

After going back and forth, and back and forth, and carrying both lenses some of the time, I've personally settled on the 24-70mm f/4L IS as my primary walkaround, travel and general purpose lens. I usually have a telephoto zoom with me, reducing the value of the 24-105's focal length advantage. That leaves all of the other advantages to outweigh the 24-105's primary advantage. I've used the 24-70 f/4L IS in the 4 corners of the 50 USA states and many locations within. It has served me very well and has now permanently replaced my 24-105 f/4L IS.