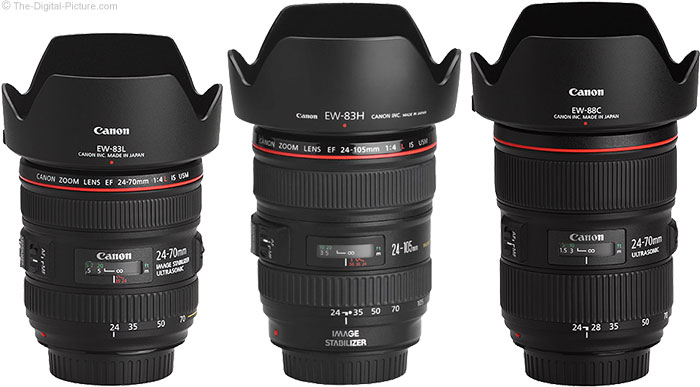 Finding the ultimate general purpose lens for the new EOS 5Ds R cameras entering my kit was a high priority for me. With image quality results from the EOS 5Ds R now available in the Canon EF 24-105mm f/4L IS USM Lens Review, the three primary Canon lens choices are available for comparison.

To be honest, I thought the 24-70mm f/2.8L II would be easy to declare the winner and optically, it is the best of this list. However, the two f/4 lenses perform better in front of 50.6 megapixels than I expected.

The f/2.8L II is slightly sharper over then entire focal length range at f/2.8 than either of the f/4 lenses are at f/4. At the equal f/4 comparison, the f/2.8L II is noticeably sharper and is still sharper at f/5.6. At f/8, the differences are slight and at f/11, diffraction essentially evens the playing field. Choosing an image sharpness winner between the two f/4 lenses is a challenge, but more noticeable is the 24-105's higher CA and distortion levels.

The f/2.8 lens has a 1 stop wider aperture, giving it the ability to stop action in 1/2 as much light as the other two lenses and the ability to create a stronger background blur. The 24-70mm f/4L IS rules the maximum Magnification (MM) spec with a 0.70x rating vs. the competition's 0.23x and 0.21x specs. The two f/4 lenses have image stabilization, allowing them to be used handheld in far lower light levels than the f/2.8 lens (as long as the subject is not in motion). The 24-105 L has the benefit of reaching to 105mm on the long end.

All of these lenses are easily good enough for use in front of a 5Ds. The decision differences for many will come down to price, aperture and overall versatility.

If your investment in the 5Ds has left you monetarily strained, a good value may be your highest priority. In that case, the 10 year old 24-105mm f/4L IS, purchased in white box or refurbished condition would be a great choice. Canon omitted the 24-105 L from its EOS 5Ds Lens Recommendations List, but ... I think this model is very worthy of consideration.

If you need to stop action in low light or want to create the strongest background blur, you need an f/2.8 aperture and the choice is easy. While the 24-70mm f/2.8L II will impact your wallet the greatest and will leave you without IS, this is the most amazing lens choice optically.

For overall versatility, I'll give the nod to the 24-70mm f/4L IS. The smallest and lightest lens of the group, the 24-70mm f/4L IS offers great image quality along with the best-performing image stabilization system and a macro-lens-like close-focusing capability. While more expensive than the white box or refurbished 24-105 f/4L IS, the 24-70 f/4L IS has the same regular price as the 24-105 L and is also a good value.

While it would be easy to justify a decision for any of these three lenses, I'm going to declare the EF 24-70mm f/2.8L II Lens to be the ultimate EOS 5Ds general purpose lens. Canon apparently agrees with this choice as this is the lens shown mounted in the Canon-supplied EOS 5Ds product images. However, I will not be selling my 24-70 f/4L IS lens anytime soon.

Learn More about the Lenses