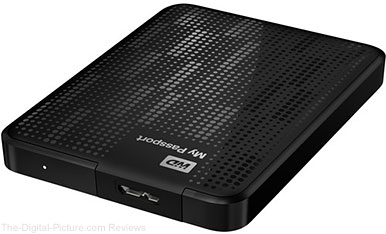 If your hard drive failed right now, what would you lose? While I hope that your answer would be "Practically nothing", unfortunately, I know that the percentage of photographers lacking regular backups is very high.

While shooting at Ding Darling National Wildlife Refuge last week, I overheard one gentleman asking another why he was shooting a particular scene, indicating that the person already had photographed that particular scene numerous times before. The response sent a chill down my spine: "My hard drive crashed. I didn't have a backup and lost most of my pictures. I'm trying to replace what I lost."

PLEASE don't let me hear those words from you. Hard drives fail or become corrupted far more frequently than you want to believe. You could be the next victim and you could become so right now. Theft and fire are additional perils you should guard against.

With so many good backup options available today, there is no good excuse for not backing up. Western Digital My Passport Portable Hard Drives are currently my first choice backup strategy. I have 15 of the 2 TB models in active use and another dozen or so smaller capacity models acting (mostly) as archive drives. The small size and high capacity of these drives allow me to easily rotate current copies off-site and also to a second location in my studio regularly.

If you are lacking a regular backup strategy, decide right now to tackle that problem and commit to a routine that protects what you've worked so hard to create.
Posted: 3/8/2015 8:55:47 AM CT   Posted By: Bryan
Posted to: Canon News, Nikon News, Sony News    Category: Photo Tips and Stories