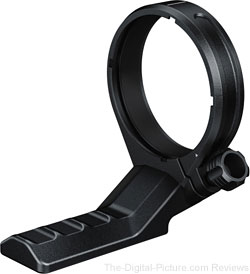 Tamron has designed a new tripod mount ring (long type) for its popular SP 150-600mm F/5-6.3 Di VC USD (Model A011). Compared to the supplied tripod mount, the new long-type design provides an extended base surface. This extra space not only makes it possible to add a second screw hole for secure mounting, thereby enhancing stability and versatility, but also makes it easier for users to hold the base surface and carry it around. The new mount ring will be sold as a separate accessory.