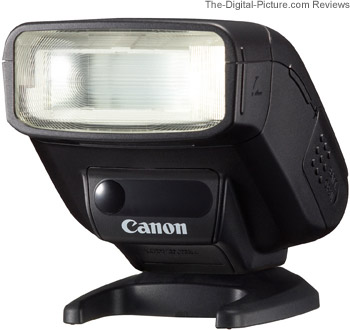 Like the rest of the "EX" series Speedlites, the 270EX II is compatible with all EOS camera bodies and many Canon PowerShot point and shoot cameras. The small size and low weight of this flash make it especially attractive to the latter. Here is the EX Speedlite Flash lineup as of review time:

Again, the 270 II stands out in the small size category. And the respective prices follow a pattern somewhat similar to the size. Obviously, something is given up in order to obtain these size and price dimensions. The big question is: Does the 270EX II have all that you need? 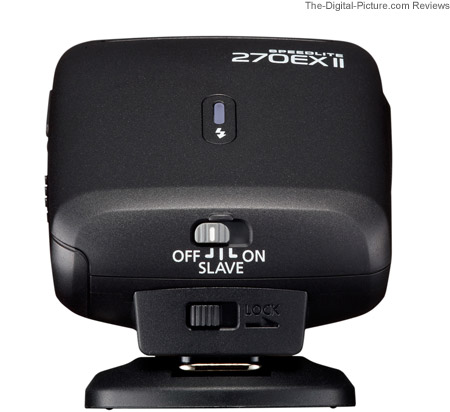 One feature you may need is the ability to use the flash wirelessly off-camera. The HUGE 270EX II upgrade from the 270EX I is the addition visible on the power switch shown in the back view above - the new "SLAVE" mode. With an integrated or accessory Speedlite controller, the 270EX II can be wirelessly controlled via light. This controlling light requires line of sight, though the controlling light can work when bounced in some situations (from a non-DSLR-integrated controller).

There are no channel or group settings available on the 270EX II, but simply being able to fire a flash (or as many of them as you like) off-camera gives you FAR more control over your light and generates MUCH more creativity. Since it can be used off-camera, a standard Canon flash shoe stand is now included with the 270EX II. It conveniently tucks into a small pocket in the also-included lightly-padded nylon pull-string pouch for storage and transport.

The remote controller operates on a 2 second delay - to give you time to reposition the flash as desired. Press the button with the flash directed toward the camera, aim the flash as desired and the shot is taken. The flash release is a brand-new-for Canon feature that is shared with the announced-at-the-same-time Canon 320EX Speedlite.

While the remote flash feature is incredibly useful, I'm not "getting" the remote camera controller feature. Perhaps I'm being dense, but still life and macro photography are the primary uses I see for this feature. If you are firing the camera from the flash, the camera has to be on a tripod, pre-focused (ideally) and pre-framed. I suppose an assistant could be holding the camera, but I would rather have an assistant (or light stand, Justin Clamp, Joby Tripod etc.) hold the flash with me controlling the setup from the camera.

If I am to be in the picture and firing the camera with the flash, the flash is probably not going to be in a good location to light the picture. So, what's the use? The feature works as-advertised if you want to use it - or you can just ignore it.

The back of a flash does not get much more featureless than the 270EX II back. Not even a test button. Perhaps "simplistic" would be a better marketing term. The camera menu system is relied upon for changing this flash's settings, so be sure that your camera has the flash menu feature. Here is the Canon EOS DSLR compatibility statement from Canon: "Compatible with model EOS 5D Mark II and later. Available via firmware update for: EOS-1Ds Mark III, EOS-1D Mark III, EOS 40D, EOS 50D, and EOS Rebel XS". 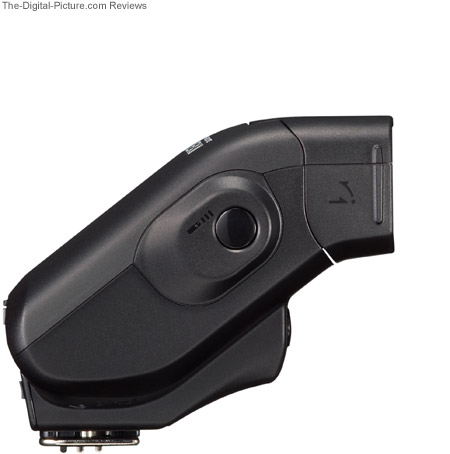 The 270EX version I's biggest enhancement over the 220EX, by far, was the bounce-capable head. This feature was retained by the 270EX II and is demonstrated above. While the adjustment range is very limited (no swivel and 0°, 60°, 75° or 90° tilt), any bounce capability is a big improvement over the fixed position 220EX head. A 2-position manual zoom option allows the 270EX II to concentrate its light on the framed subject - making more efficient use of its power and extending its useful distance. Note that only the telephoto zoom setting can be used in any of the bounce orientations (the retracted flash head prevents use of the bounce feature).

The Speedlite 270EX II retains the metal foot and new locking mechanism found on the 270EX (upgraded from the 220EX). Build quality is very good, though the extending portion of the flash head feels light and has some flex. The 270EX II charges inaudibly (essentially - some squealing can be heard if you put your ear against the flash).

Batteries are heavy - the Canon Speedlite 270EX II Flash shaves 50% off all other EX flash battery weights by reducing the AA battery count from 4 to 2. Note that batteries are not included in the weight specifications below - use NiMH rechargeable batteries for both cost, environmental and performance reasons. I use and recommend Sanyo Eneloop batteries for their long-lasting performance and especially for their slow discharge properties. All dimensions below are WxHxD. The ST-E2 is not a flash but a flash transmitter - it requires a 2CR5 lithium battery.

The height of a flash helps the light physically clear large and wide angle lenses when the flash is directed straight forward. This helps eliminate the dark half-moon commonly seen at the bottom of images taken with the built-in flash and moderate-sized lenses. The 270EX II is a very short flash - but - it is shifted forward to give it some lens clearing ability. Height also helps reduce the red-eye effect.

What is a "Guide Number"?

More basically, Guide Number = Power. More power is better as the flash can adjust to lower power when full power is not required, but more than full power is never available. The 270EX II output is, as expected for the small size and price, near the bottom of the group - but still useful.

Angle of Coverage figures show the flash's native zoom head range and the wide angle coverage available by using the built-in (pull-out, flip-down) diffuser if so equipped. Listed focal lengths are for a full frame body. A 17mm focal length setting on a lens mounted to a 1.6x DSLR such as the Canon EOS 60D requires flash coverage of 27.2mm. Corners become darkened when using lenses wider than the angle of coverage. Longer focal lengths can of course be used with any of these flashes, but light falling outside of the framed image will usually be wasted.

Recycle times are for full power flash discharge. When two recycle times are provided, the first is the "Quick flash" (50% charge) time and the second is the "Normal flash" time.

Recycle time specifications are based on new AA Alkaline batteries. NiMH batteries have much less internal resistance than alkaline batteries resulting in significantly shorter re-cycle times (around 33% faster). NiMH batteries also give more consistent (full) power until they are discharged while alkalines will recycle the flash more and more slowly as they expend their life (again, try Sanyo Eneloop batteries).

All of the above-compared Canon flashes have an AF assist beam for enabling autofocus in very dark or low-contrast situations. Most Canon Speedlite flashes project a visible red grid pattern (yielding both light and contrast) for the camera's AF to lock onto. This beam typically offers coverage for up to a specific number of AF points. Since many EOS DSLRs and both 270EX flashes use a series of flashes for AF, there is no concern about AF point coverage, but there must be existing contrast for AF to work properly. A white wall will likely cause problems for you. The 270EX II has an in-total-darkness AF assist effective range of approximately 13.1' (4m) in the center and approximately 11.5' (3.5m) at the peripheral AF points. 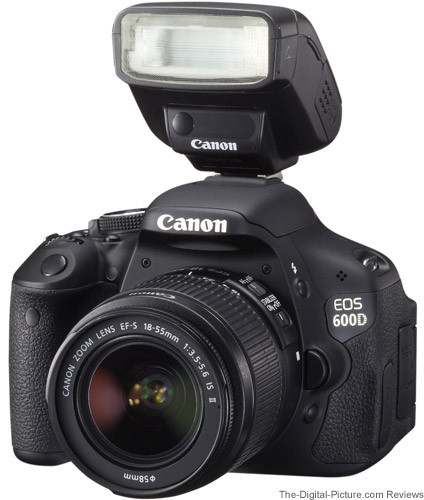 E-TTL II (Electronic-Through the Lens metering version II) is Canon's latest (as of the Canon Speedlite 270EX II Flash review date) flash exposure metering system. A preflash along with subject distance information (when available) is used to determine the proper amount of light to provide in the immediately following full exposure flash.

E-TTL II also provides improved white balance when the camera is set to Auto or Flash white balance. "Slight variations in a flash gun's voltage and brightness can destabilize white balance in respective frames during continuous shooting. The Speedlite [270EX] compensates for this by transmitting color information from the flash to the camera. This information is then used to optimize the white balance setting for each individual image." [Canon]

Manual flash power mode is a very useful feature. It was not an option on the 220EX, but with a compatible EOS body under this flash, manual flash output can be selected in the menu system. If your subject distance, light levels and camera settings are constant, determine and manually set the proper flash power. Every exposure will be correct.

The Canon Speedlite 270EX II Flash has 4 custom functions. These are adjusted using the menu system of a compatible EOS DSLR.

The 270EX II is a quality flash. I've been using it here and there when I have an application that it can handle. Here is one example.

Brittany and her team had a great soccer season, so I wanted to capture her and some of her take-home. I grabbed a 60D, the Canon Speedlite 270EX II Flash, a light stand, an umbrella adapter and an umbrella. I positioned Brittany in front of a white wall with the umbrella short-shafted *just* outside of the frame camera-left and a white reflector just outside of the frame to camera-right. Here is the result. 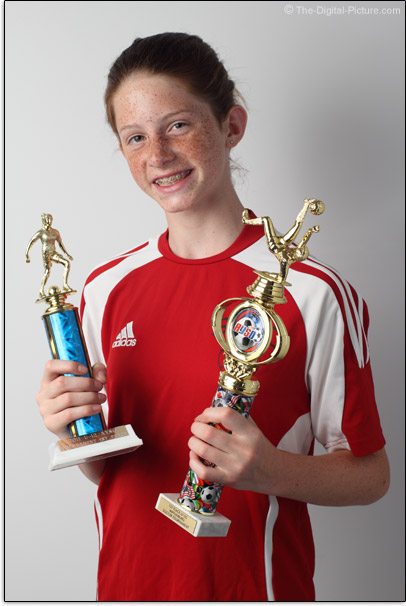 While an ST-E2 could easily bounce enough light to fire the flash, the 60D's integrated Speedlite Transmitter requires direct line of sight with the receiver on the 270EX II (but not the 320EX). The 270EX II head's inability to rotate complicates its use in an umbrella as the umbrella itself can easily block the direct flash. But with some care taken, this very simple and inexpensive setup can create a high quality light on your subject.

I short-shafted the umbrella to shorten the distance the light was being reflected from and positioned the umbrella just outside of the frame to maximize the light from this relatively low-powered flash. I was able to get reasonable ISO 100 exposures at apertures as narrow as f/8 in this specific setup.

You are going to need wider apertures and/or higher ISO settings if bouncing this flash from a ceiling. A more powerful flash quickly becomes desired in this and other situations.

The Canon Speedlite 270EX II Flash is great for fill flash on cameras that do not come with a built-in flash - such as the Canon EOS 5D Mark II. The small size and close-to-line-of-site (creating less secondary shadow) are advantages for this use.

I strongly encourage you to read the Canon Speedlite 430EX II Flash Review and the soon-available Canon Speedlite 320EX Flash Review before making your purchase decision. You will likely find the comparisons in those reviews helpful. The 320EX and 430EX II's additional features and power are valuable in my opinion. I actually recommend the Canon 580EX II Speedlite Flash at the end of the 430EX II review, but that flash is in a completely different size and price league. And at some point, some budgets will become exceeded.

The Canon Speedlite 270EX II Flash is a good choice when small size, light weight and low cost are priorities over features and power. With some its wireless remote capability and limited bounce functionality, the 270EX II can easily deliver better image quality than no flash or the built-in flash in some situations.